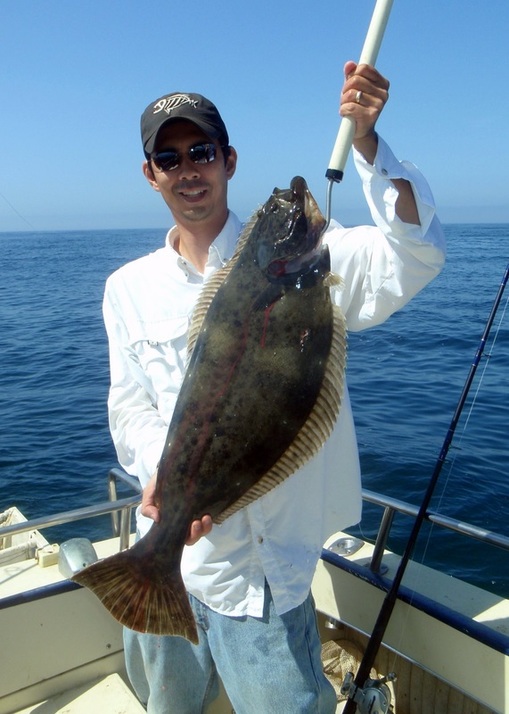 There are two species of Halibut that I know of:  Atlantic Halibut and Pacific Halibut.  The California Halibut are actually in the flounder family.  The true Halibut get much, much bigger and are found farther north in colder waters.  I have caught a handful of these in Alaska but this section is dedicated to the California Halibut.

The California Halibut is one of the best species you can consistently catch from shore here in Southern California, especially during their spawning season in the late spring.  They don’t put up a great fight but are challenging to catch and fun to eat.

California Halibut have some sharp teeth and you don’t want to put your fingers near their mouth.  They reach a max weight of around 50lbs but anything over 22” (legal keeper size) is a nice fish from shore.  California Halibut are found from California down south to the bottom of Baja.

Despite not putting up much of a fight in the water they sometimes fight in the boat.  I was on a party boat several years ago when a boy caught a very large one in the 45lb range.  It went crazy in the boat and thrashed all over the place.  The deckhand got an aluminum fish bat and whacked it hard about 20 times and that just made it madder.  That beating would have easily killed a 200lb man but apparently not a 45lb halibut.  It also bit a chunk of wood out of the side of the boat.

California Halibut are ambush predators that bury themselves in the sand and wait for something like a small fish or squid to swim by.  However, every now and then they become more active predators and I have even seen them come up to the surface to chase bait fish.

California Halibut do not put up much of a fight at all.  They just are not very strong.  They make a few headshakes on the way up and that's about it.  You have to play them lightly so they don't spit the hook from their soft mouths.

California Halibut don't fight much, but they make up for it at the dinner table.

You do not need heavy tackle for these guys at all.  They live in the sand away from things that will break you off.  They also don’t pull all that hard.  I would fish 6-8lb test from shore and 12-15lb test line if you are fishing for larger ones.  A Daiwa Certate 2000 size reel is perfect.  Despite their sharp teeth you do not need wire.  Click here for tackle recommendations.

California Halibut lie in the sand waiting for something to swim by that looks good to eat.  Once in a while they come up off the bottom to hunt, but in general you should focus on keeping your bait or lure on the bottom.  Drifting is usually a good way to fish for them since you can cover a lot of ground.

When fishing from shore, many people like to cast jerkbaits and retrieve them close to the bottom.  They will also hit soft plastics, which are easier to keep near the bottom.  The 3" size is a good all around size for swimbaits although you could go bigger if there are bigger baitfish around.  I have not fished for them much this way, but I have caught a few.  A lot of times they will bite the tail off of your plastic.  A shiny Krocadile spoon fished slowly along the bottom works well too and the back treble hook hooks them more often.  Click below for some gear that will catch California Halibut:
California Halibut Baits

California Halibut love live baits drifted over the bottom.  Sardines and Pacific Mackerel work well, as do live squid if they are available.  I like to add a trap hook at the back of the bait with a treble hook.  I also like to add a couple of red beads to the leader ahead of the treble hook.  Maybe it just makes me feel better, but in my mind this helps draw more strikes.  If you use the trap hook setup you can set the hook right away.  If you just use a single hook, you have to wait until the Halibut really swallows the bait (they often just grab the back half) and that is pretty tricky.  The bigger ones just swallow it, but the little ones chew on it a while.  With the trap hook you get both, which is especially good when the big ones aren't biting.

Where to get the big California Halibut

Some of the offshore islands such as San Clemente and the Channel Islands have some big ones.  The biggest one I have ever seen in person was around 45lbs and was caught at San Clemente.  San Quintin in Baja has some good fishing for medium to large ones.

The above barely scratches the surface on how to catch California Halibut.  The resources below will provide a wealth of information: 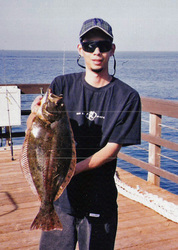