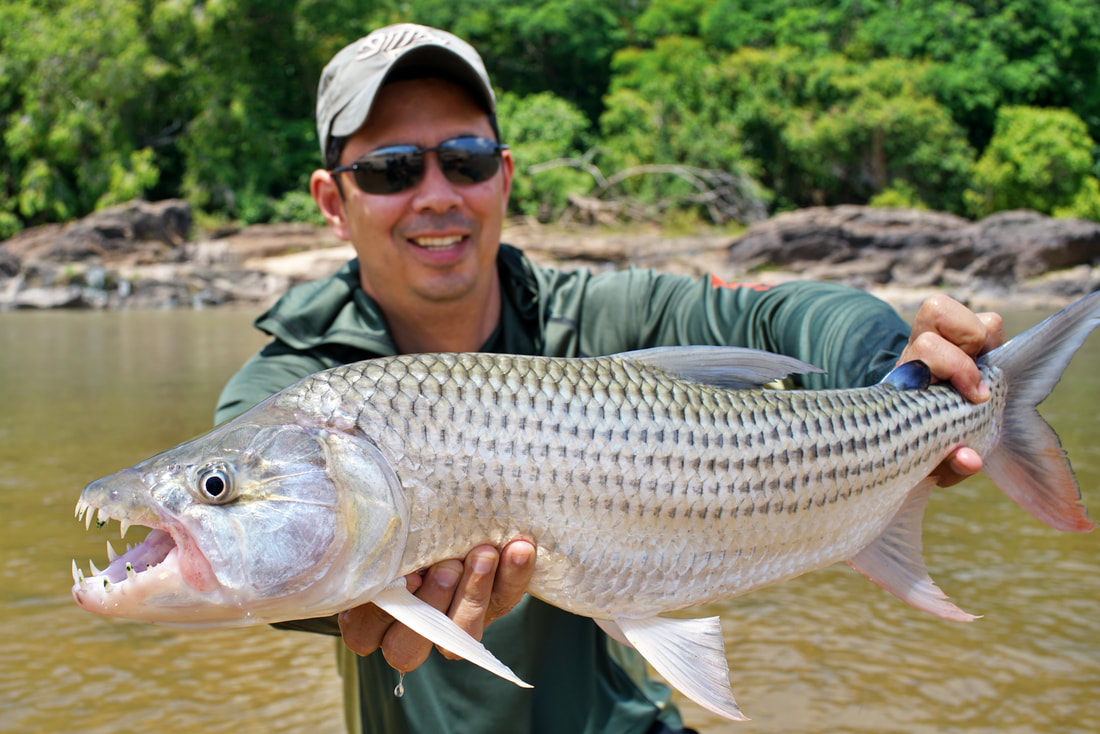 HOME
Check Out Other Species

African Tigerfish are a fearsome and unique species found in Africa.  They are a pure ambush predator with some impressive teeth that generate tremendous strikes that are unrivaled by any other freshwater fish that I have seen.

Tigerfish inhabit lakes and rivers throughout many parts of Africa.  The largest Goliath subspecies is found in Congo and is very difficult to access and catch.  You need to be prepared to make a lot of casts in some dicey areas in order to land one.  The next largest subspecies, H. tanzaniae, is found in Tanzania and is also known as the Blue Tigerfish due to its blue adipose fin.  These often can exceed 20lbs..  H. vittatus is found throughout the Zambezi watershed and is characterized by bright red/orange fins, sometimes with yellow as well.  10lbs is a nice specimen of H. vittatus, although they do get a bit bigger.

Tigerfish are made to ambush baitfish.  They don't have a lot of stamina, but their initial strike is incredibly fast and hard.  It nearly always takes me by surprise.  They often strike right when your lure or fly hits the water and are 20 yards away before you even know what happened.  A lot of times they run towards you, and in those cases they usually spit the hook before you realize what is going on.  They have a mouth like concrete with teeth that deflect hooks.  That makes them hard to hook, although once in a while you get lucky and they run away from you and set the hook themselves before you realize you got a hit.

Tigerfish are poor table fare and should be released; please see the release tips here. 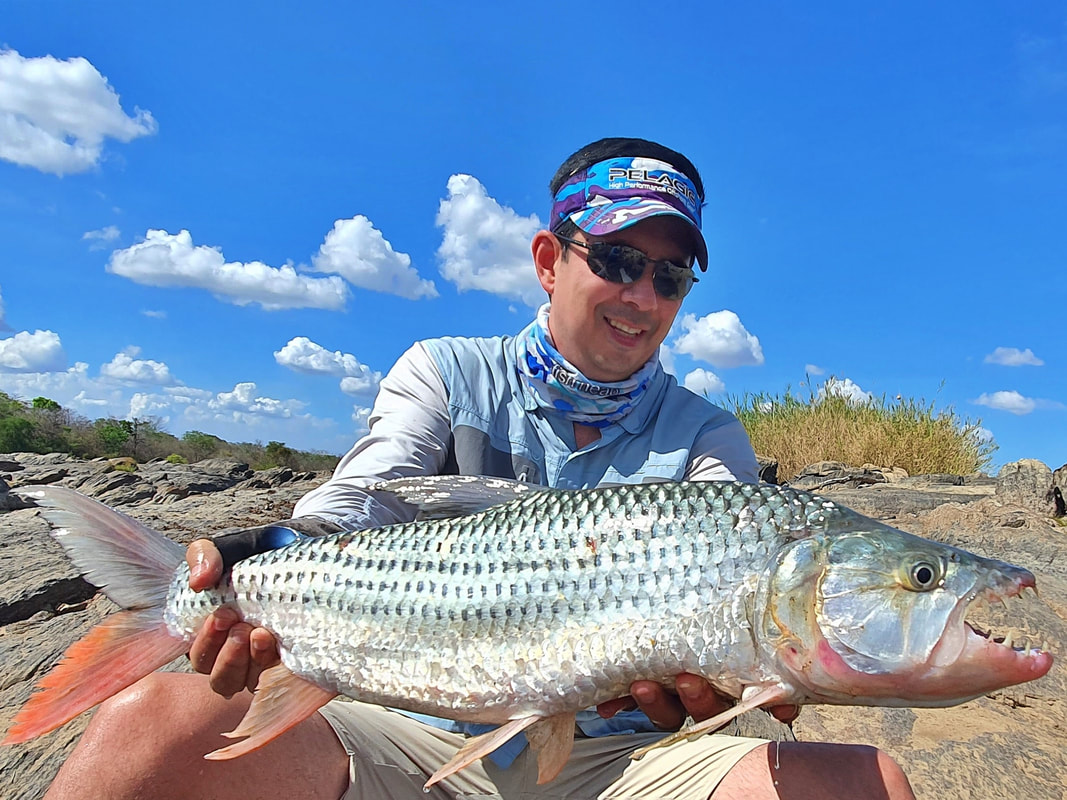 I'm giving this rating primarily to the Tigerfish's incredible initial strike, which is unrivaled in freshwater.  It's hard to prepare for until you experience it.  They also frequently jump when hooked and spit the hook out.  I've even had them spit circle hooks that I thought were well positioned several times.  If you manage to get a good hookset off the initial strike and survive a couple jumps, they tend to come to the net relatively quickly.

Tigerfish require a fairly stiff rod to set the hook in their hard bony mouths.  You don't need a broomstick, but you won't get too many if you use a rod with a soft tip.  Braided line helps set the hook as well; I like to use 40lb braid.  A wire leader of 30-40lbs is a must.  Single hooks with no barb help get good penetration.  There is a tradeoff between needing a thin hook to penetrate, but not so thin that it gets straightened. 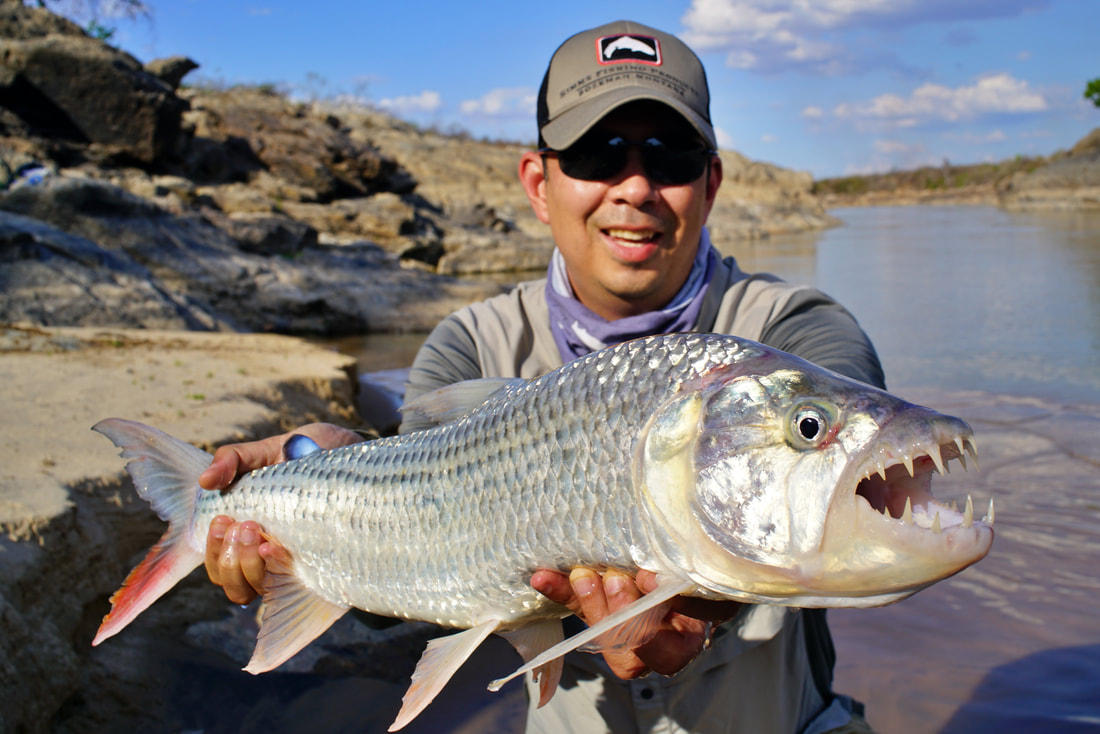 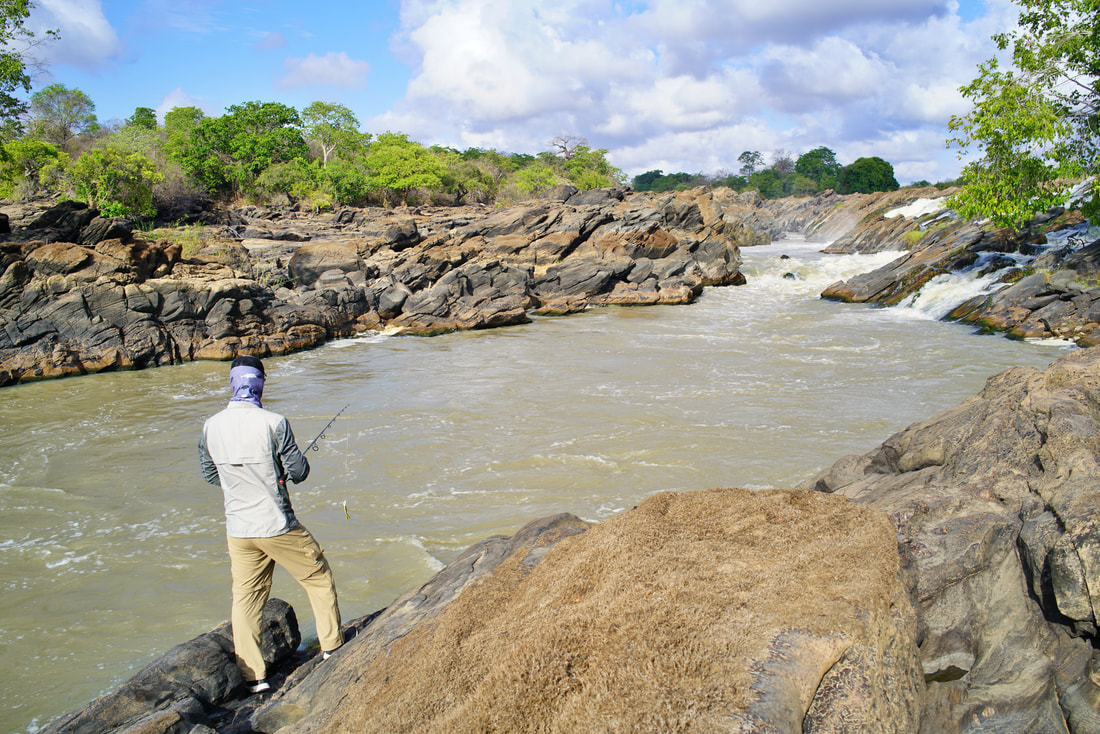 Tigerfish can be caught on fly, lures, and bait.  The hookup ratio is actually often high with fly, making them a great target for fly fishermen.  Regardless of the technique used, you want to target eddies and still water adjacent to flowing water.  This is where they like to ambush their prey.  The bases of waterfalls are good spots as well. Whatever you use, be prepared to set the hook as soon as it hits the water, as Tigerfish often strike immediately.  They also often strike right at your feet at the end of the retrieve.

Always ensure you hooks are razor sharp with Tigerfish.  You will miss and lose a lot no matter what you do, so you need to maximize your chances.

African Tigerfish are suckers for spoons and spinners.  A spoon called an Effzet is very popular.  I had good results with a Mepps Syclops spoon.  Mepps spinners in sizes 3-5 catch a lot of Tigerfish.
​ 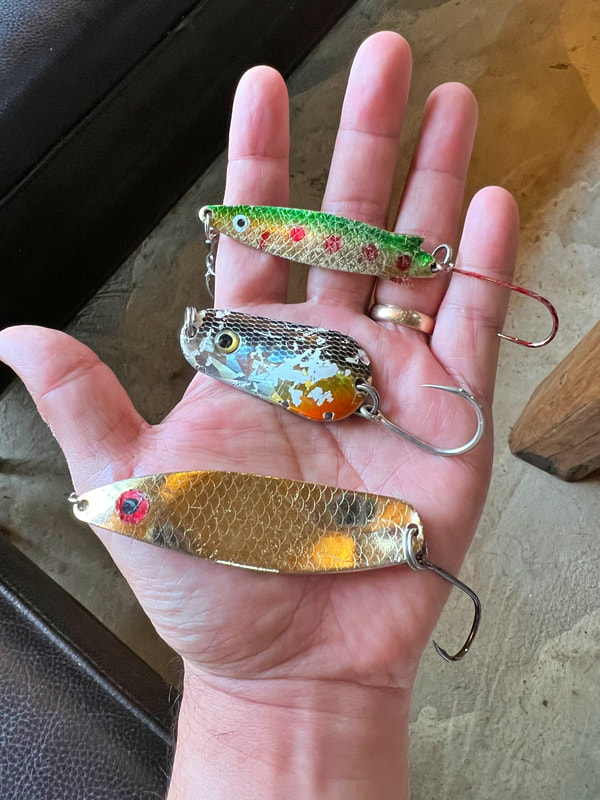 Some successful Tigerfish spoons. Note all the scratches from their teeth. Big fish often bite small lures.
I had good success using plastic frogs such as the Keitech Noisy Flapper fished on a sinking jighead.  Unfortunately, they often bite the legs off so you go through a lot of them.

Many people use a bucktail type jig called an Afrijig.  I have not had much success with them, but I know they are very popular.

Streamer flies work well.  Black/red and black/purple are popular colors for both the Afrijigs and streamers.  Tigerfish tear up flies quickly. 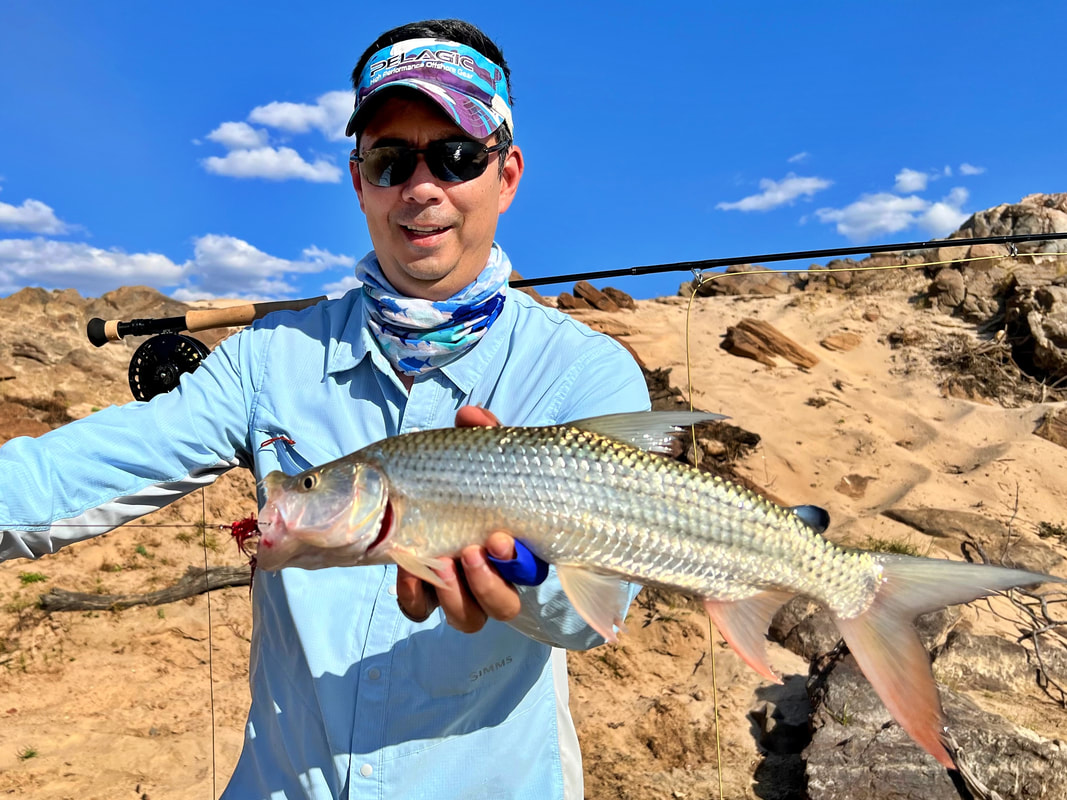 Tigerfish will take a variety of live and dead baits.  Live baitfish taken from the area you are fishing are always a good bet, but they can often be coaxed to eat chunks of fish if you can't get live ones.  Raw chicken also works surprisingly well.  Tie it on to the hook with some bait floss to keep it on or you won't have it for long.  Make sure you fish a little off the bottom to help minimize catfish and maximize Tigerfish bites.  Because they usually take off with baits, circle hooks can be a good option.​ 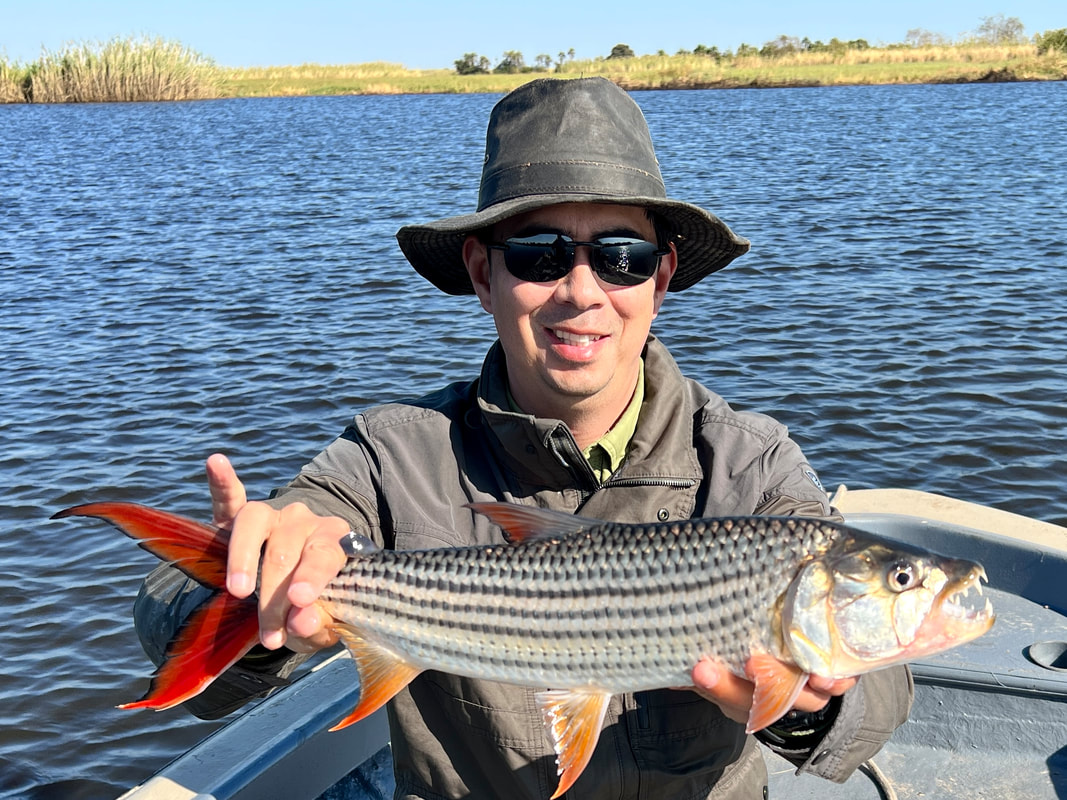 An example of H. vittatus from Botswana
Where to get the big African Tigerfish

The largest Goliath Tigerfish are found in the Congo region.  However, there are obviously some risks in going there.  The next biggest specimens are found in Tanzania, where you can have a reasonable shot at a 20lb fish.​ 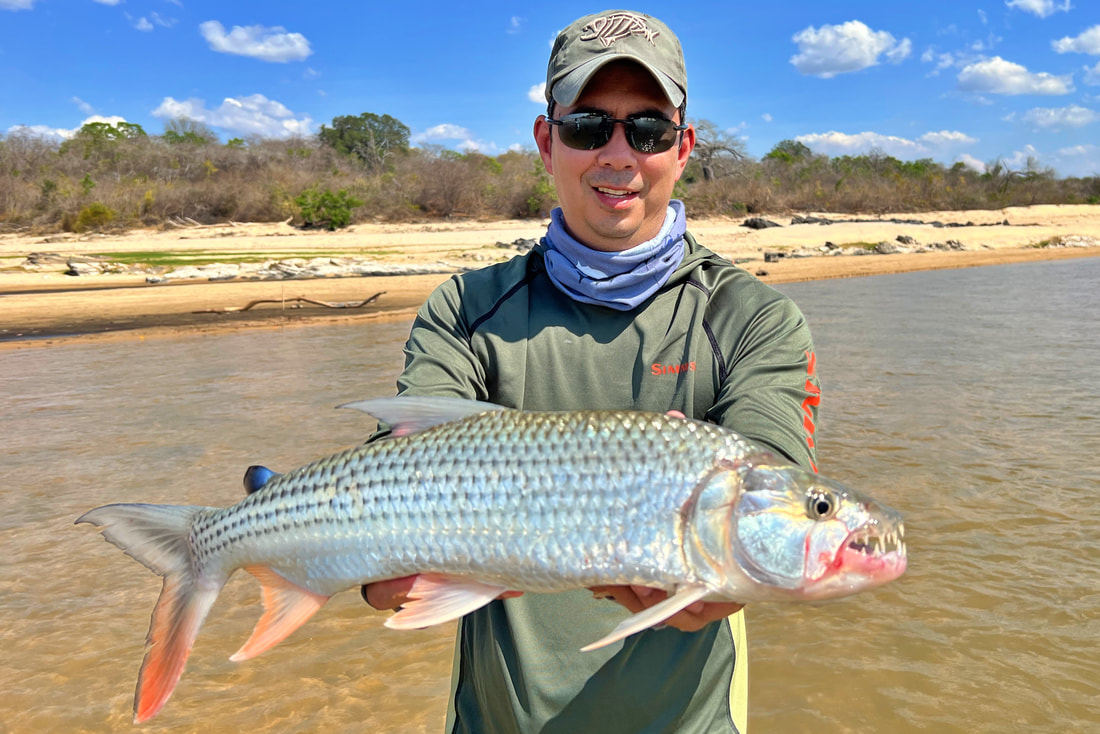