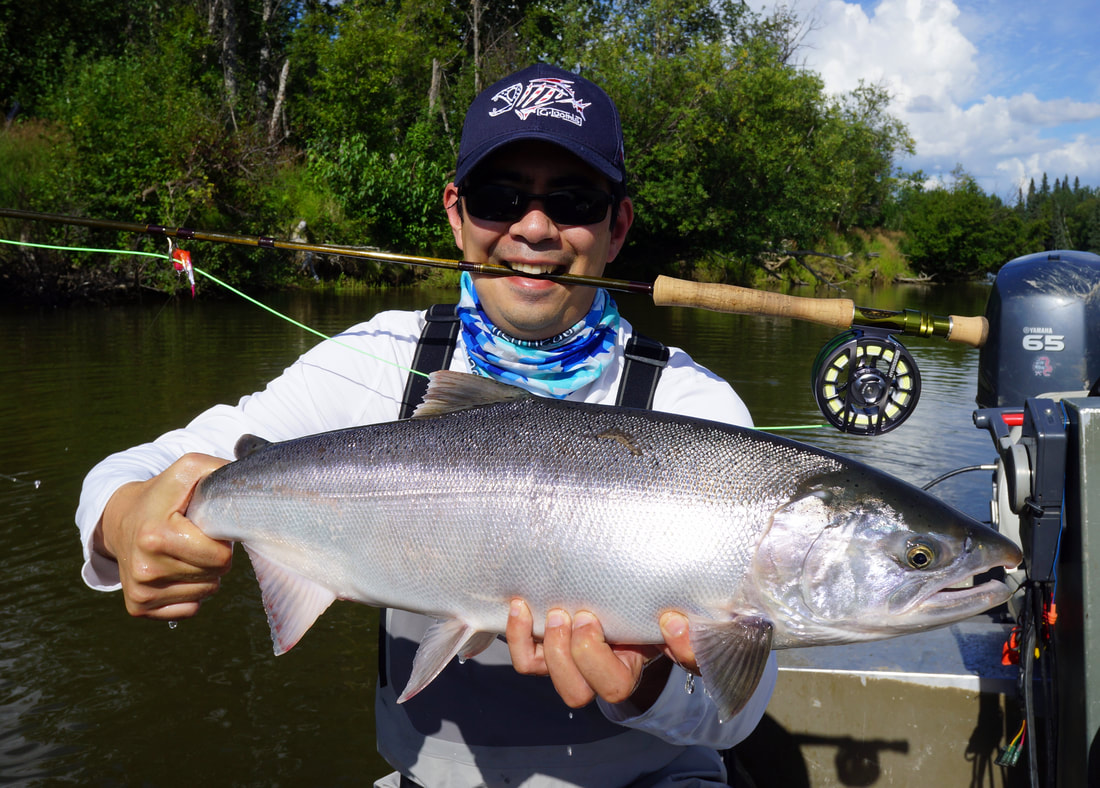 Silver Salmon, also known as Coho Salmon, are one of the five species of Pacific Salmon.  They are found on both sides of the Pacific, in Alaska and the Pacific Northwest area of North America as well as on the other side in Japan and Russia.  They have also been successfully introduced into the Great Lakes.  They are a beautiful species that are highly sought after as a sport fish.

Like all Pacific Salmon, Cohos are born in streams where they stay for about a year before heading out to sea.  There they stay for one to three years, feeding on small fish like herring, before returning to the stream of their birth for spawning.  They are typically the last of the Pacific Salmon to enter the rivers in the summer.

Like all Pacific Salmon, Cohos undergo significant physical changes upon re-entering freshwater.  They stop feeding, but can still be caught due to their instinct to attack things that go by.  They turn pink and then red in color, and the males get prominent hooked jaws.  Their flesh becomes less appetizing at this point, so if you plan to eat them you are better off catching them when they are still in the ocean or when they have just entered fresh water and are still silver.

After making a nest in shallow water called a redd, the female lays her eggs and the male fertilizes them.  After spawning, the salmon slowly die.

Cohos are aggressive feeders and are probably the most aggressive salmon once they enter freshwater.  They readily take spoons, spinners, and flies.  Once hooked, they often leap into the air to try to throw the hook.  Cohos average about 6-12 lbs as adults and top out over 30lbs.

Cohos are delicious to eat, especially if caught in the ocean.

Silvers are probably the sportiest of the salmon, making some acrobatic leaps to try to dislodge the hook.  They fight clean and stay in open water, and can be landed on light tackle.

Silver Salmon caught in the ocean are delicious, with beautiful orange fatty meat rich in Omega-3 fatty acids.  Once they enter fresh water, the quality of their meat deteriorates quickly, but they are still good when a bright silver color.

A medium action spinning rod or 7 or 8 weight fly rod will handle most if not all Cohos.  Monofilament line is often a better option than braid in many cases as they have fairly soft mouths and the stretch of mono results in less pulled hooks.  However, either will work.  12lb line should be able to handle pretty much any Coho, although trollers often use heavier lines because they are trolling heavier outfits.

When they are still in the ocean, the key to fishing for Coho is to find the baitfish they are feeding on, which are typically herring.  These are often found near current rips that concentrate zooplankton for them to eat.  The Cohos will be near the herring.  Good electronic fish finders are a big help here, although sometimes the herring are on the surface and can be spotted by looking for puddling fish or diving birds.  Once located, you can troll or mooch or jig for them with lures or bait.  People often use shiny dodgers or flashers to get their attention, although those typically dampen the fight if you hook one.

Once Cohos come in the rivers to spawn, you can look for them in calmer water where they congregate before continuing to push up the rivers to their spawning beds.  Once they start spawning, they are occasionally incidentally hooked but generally not sought after. 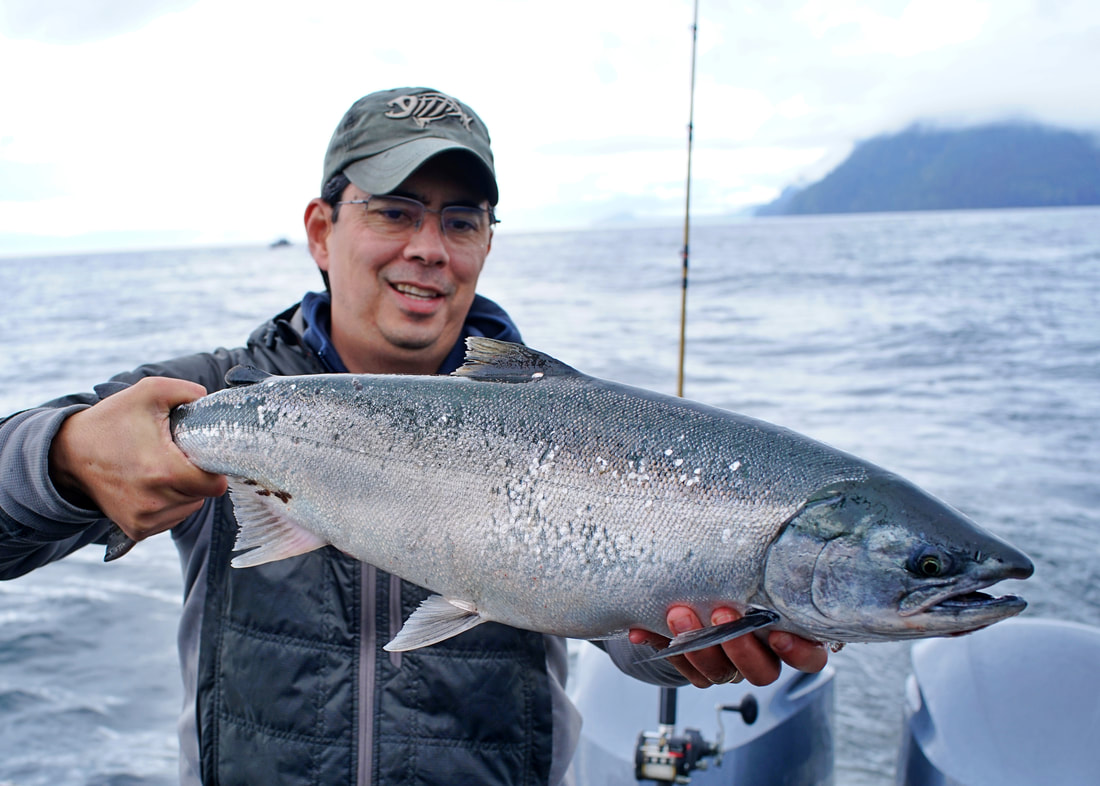 In the ocean, you can cast, jig, or troll for them using shiny spoons such as the Pixie.  A downrigger may be necessary if the fish are down deep and spread out.  Trolling with shiny bucktail flies or hoochies is very popular and effective, although personally I would always rather cast or jig for them.

In the rivers, bright pink jigs can be dynamite.  Bounce them off the bottom as you retrieve them through pods of Cohos.  Pixie spoons in silver and pink are also effective, as are spinner in bright pink and orange.  They are not feeding in the rivers, but often strike at bright things out of aggression.  Pink seems to be the color that fires them up the most.  Pink spinners can also work well.

In the rivers, fly fishing can be a fun way to catch them.  Just cast out loud and flashy pink and orange flies and strip them back. 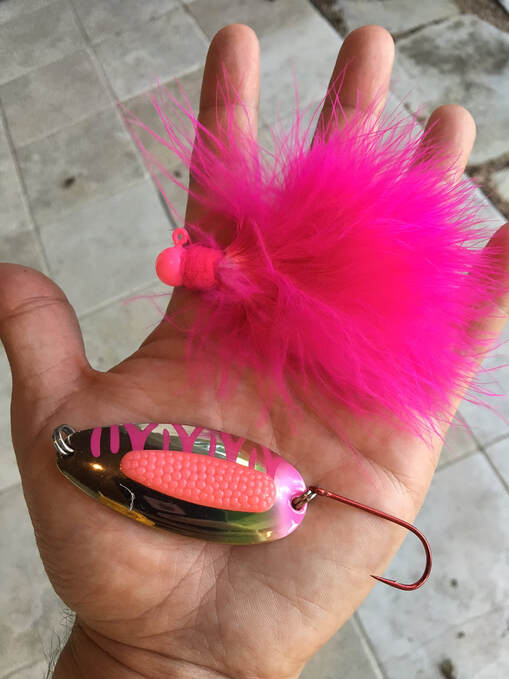 Some good lures for Cohos in rivers: a pink marabou jig and a rattling Pixee spoon. 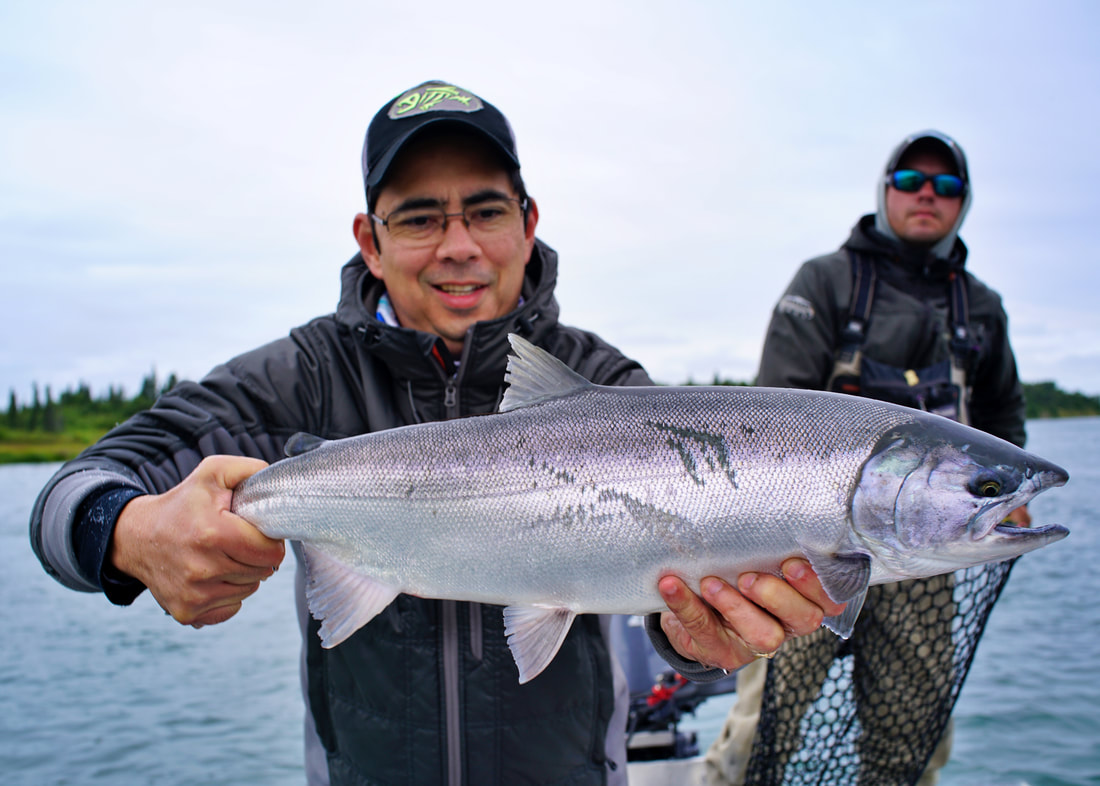 A big Silver caught on the Kvichak River, Alaska 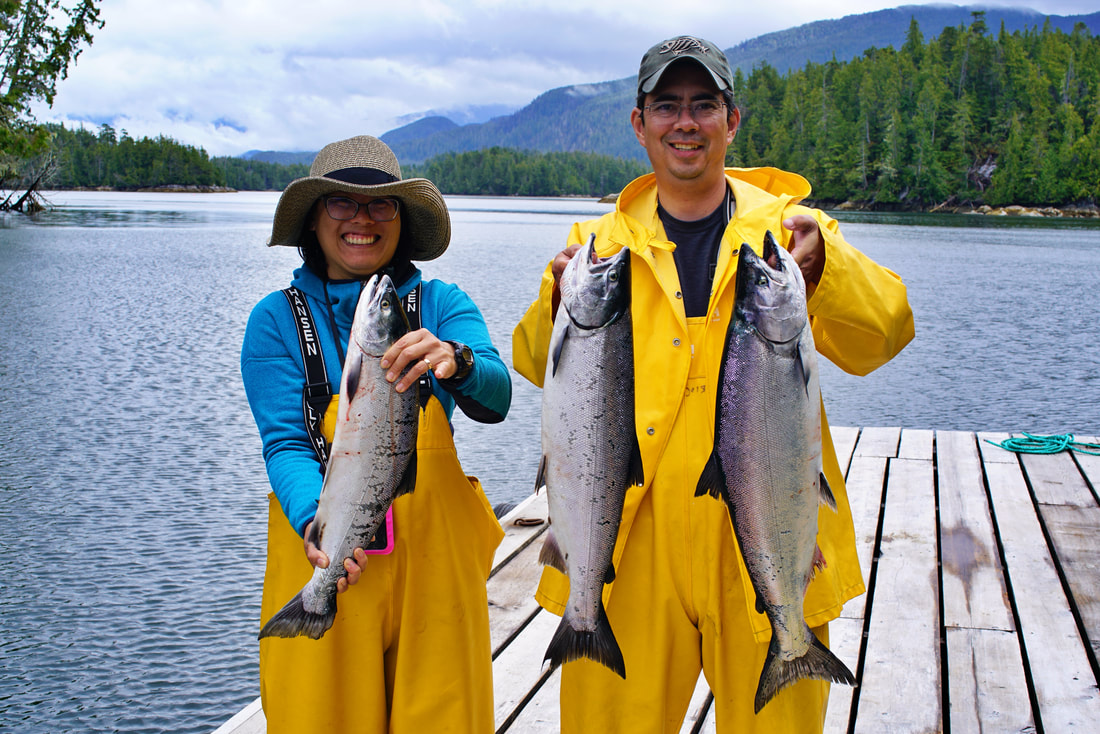 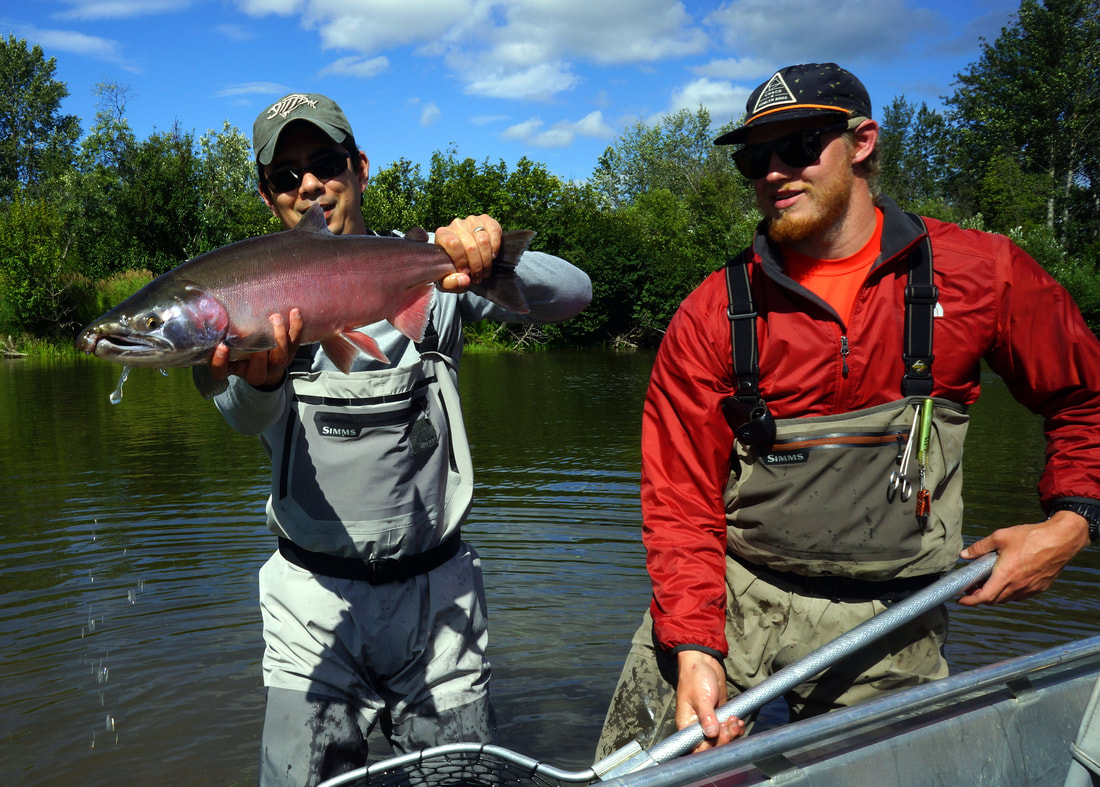 A Silver Salmon that has been in the river a little longer and is starting to turn pink ahead of spawning.
Silver Salmon Baits

In the ocean, cut herring are a very popular bait.  These can be trolled or drifted.

Where to Catch Big Silver Salmon

Alaska has the most, but oddly enough the current IGFA record was caught in the Salmon River in New York.  It was one of the ones transplanted into the Great Lakes.  Alaska is still your best bet for consistent big Coho action.

If you want to target them in the ocean, this is a good choice:  www.kingfishercharters.co

If you have some extra cash to spend, a great place to get them in rivers on fly is www.fishasl.com

This lodge is a great place to target Coho in Alaska in rivers:  www.aniakriverlodge.com.

In the Milwaukee area, this guy can put you on more than you can handle and he mostly jigs for them rather than trolling like most captains there:  www.wibigfish.com 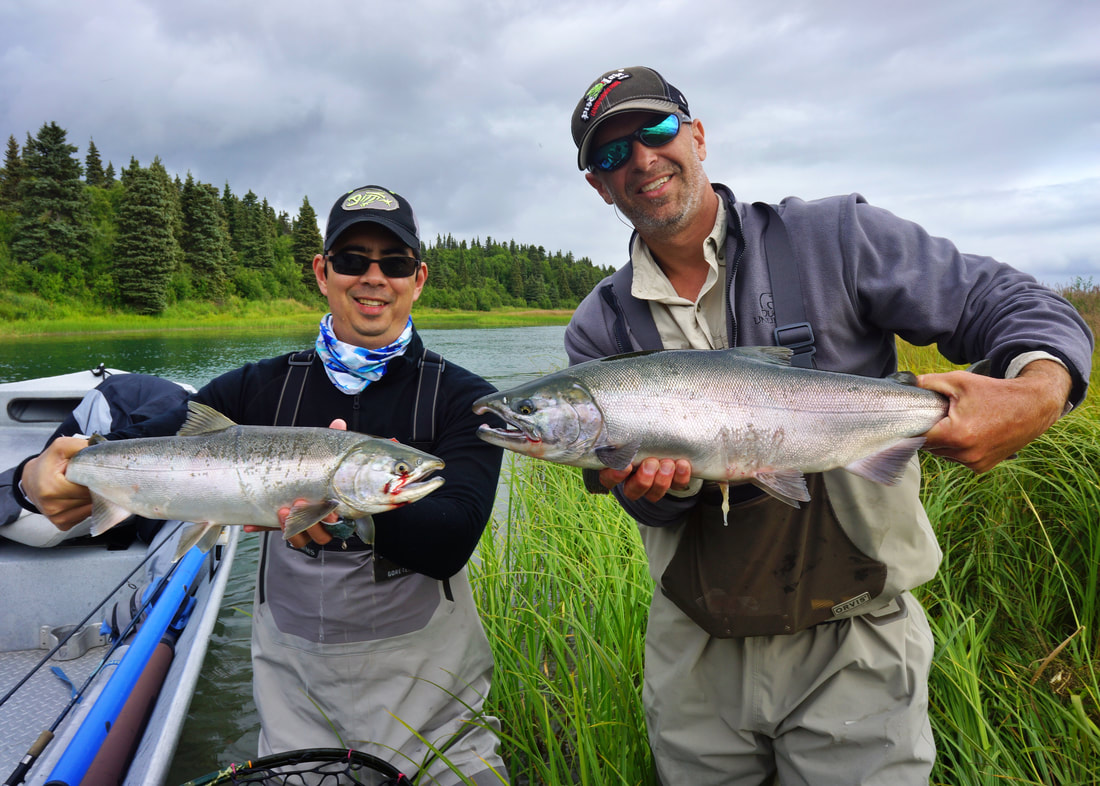 A Coho double in the Kvichak River, Alaska 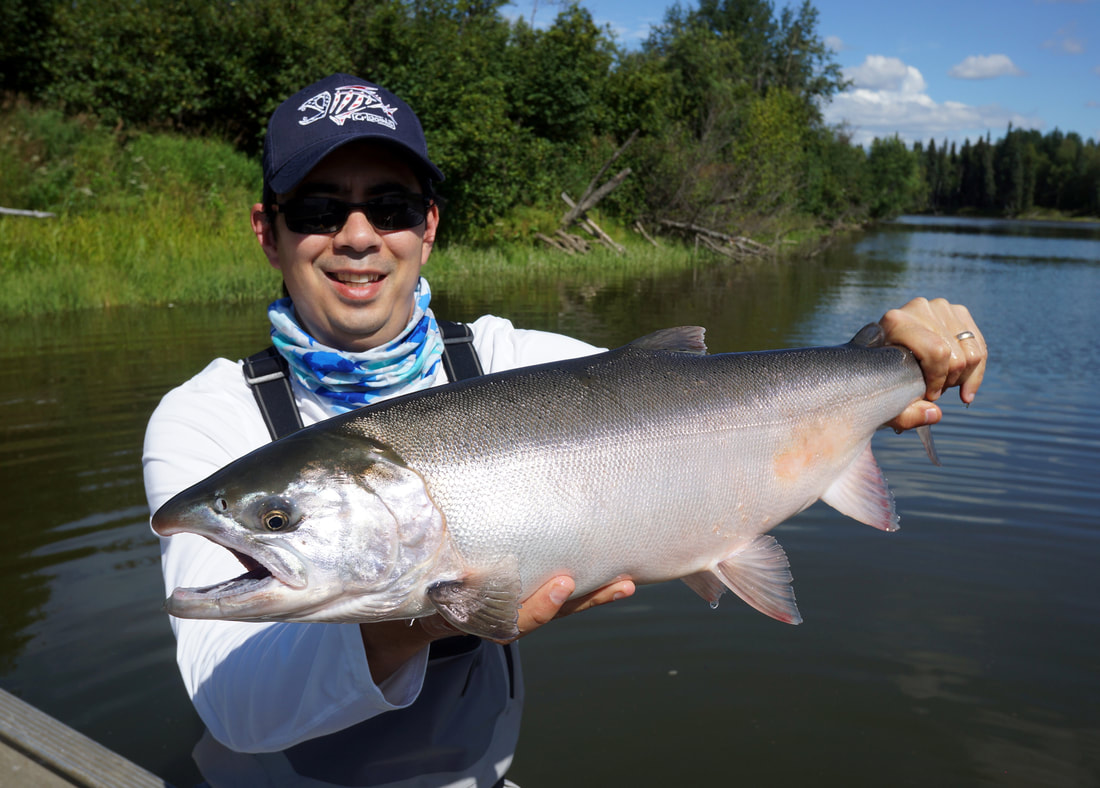 A big Silver caught on a pink marabou jig in Alaska