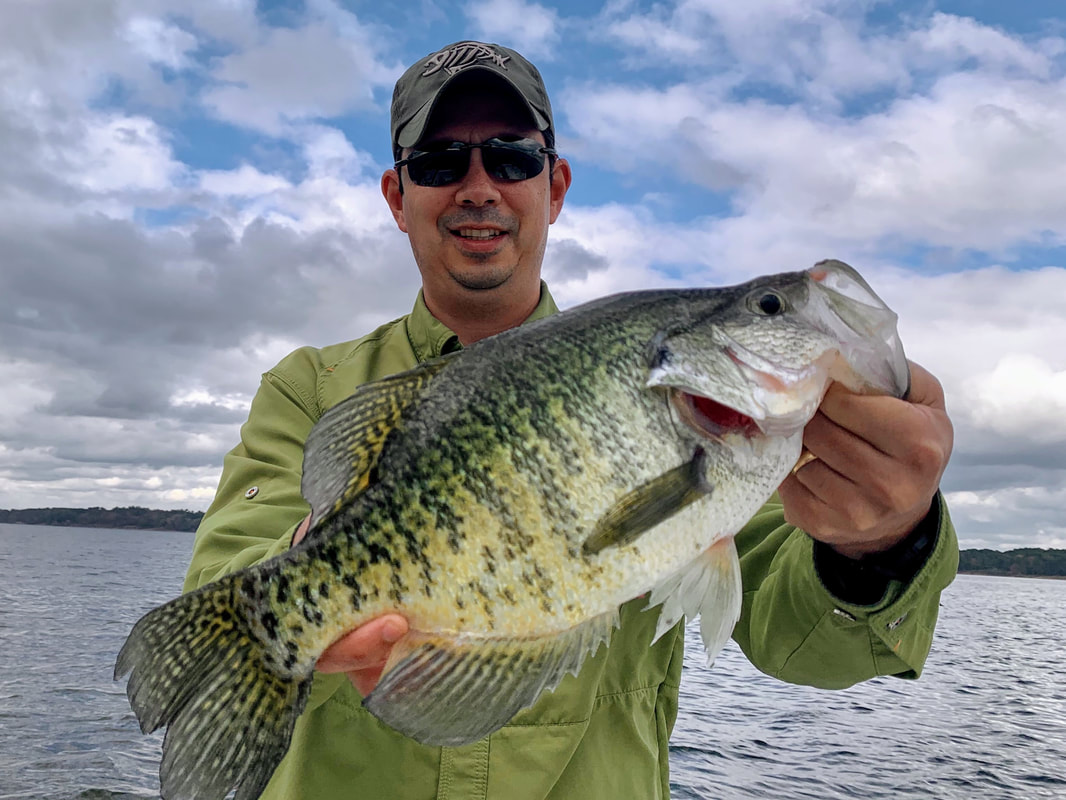 The big fish of the trip, a giant White Crappie
November 2020

Being shut in with the COVID pandemic was getting old, so I decided to take a little road trip to try to chase some big Crappie.  After doing some research, I concluded that Lake O the Pines would provide the best chance for some really big Crappie within a 5-hour radius.  I booked guide Marty Thomas because I could target big Crappie with jigs with him using Livescope, which is a highly advanced sonar system that allows you to pick out and target individual fish.  I met up with Marty at 7 on Saturday and headed over to the lake.  Thankfully it wasn't too crowded for a weekend because it was the start of hunting season.  We heard gunshots throughout the day coming from the woods as people shot at deer rather than fishing for Bass and Crappie.  Totally fine with me.  There were fishermen around, especially at our first spot, but it really wasn't bad.

We started out fishing with several other boats over some flooded trees.  These trees were loaded with Black Crappie in the 12-14" range.  The bites on the jig were light, and I had to really watch my line and feel for any little bump.  However, I fish for Crappie a fair amount on my home lake, so I was used to feeling for those light bites.  What I hadn't done before was fish with the Livescope, which is really a game changer.  It takes a little getting used to, but once I figured out how to translate what I saw on the screen to how I fished, I got pretty locked in.  Seeing how the fish would react to the jig on the screen allowed me to be able to tweak my presentation to get them to bite.

Each spot yielded several fish and by 10 am I was already at my 25-fish limit.

​
The vast majority of fish that I caught were White or Black Crappie, but there were some incidental catches as well, all on the same jigs.  A good-sized largemouth bass hopped on the jig and put up a strong fight on my ultralight rod.
As the day went on, the fish got bigger and bigger.  The biggest ones measured 15.5", and there were several in that size class.  The average size was fantastic; I caught very few fish under 12" all day and ended up with around 65 fish.  What a fantastic day. 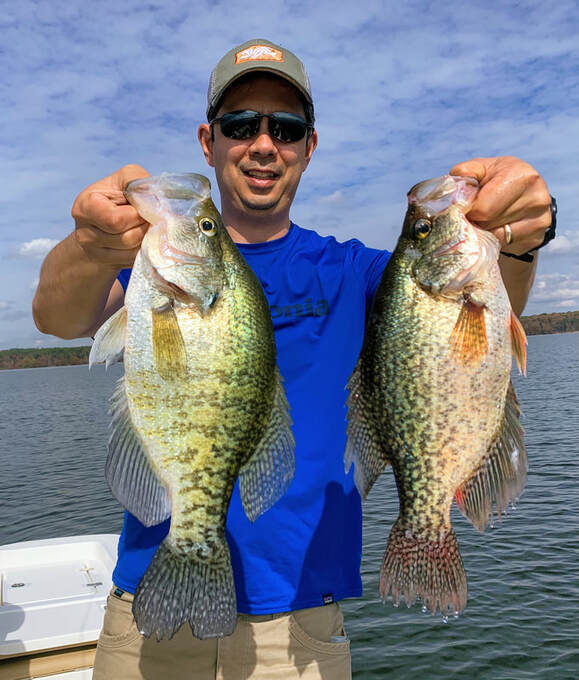 A big White Crappie and a big Black Crappie 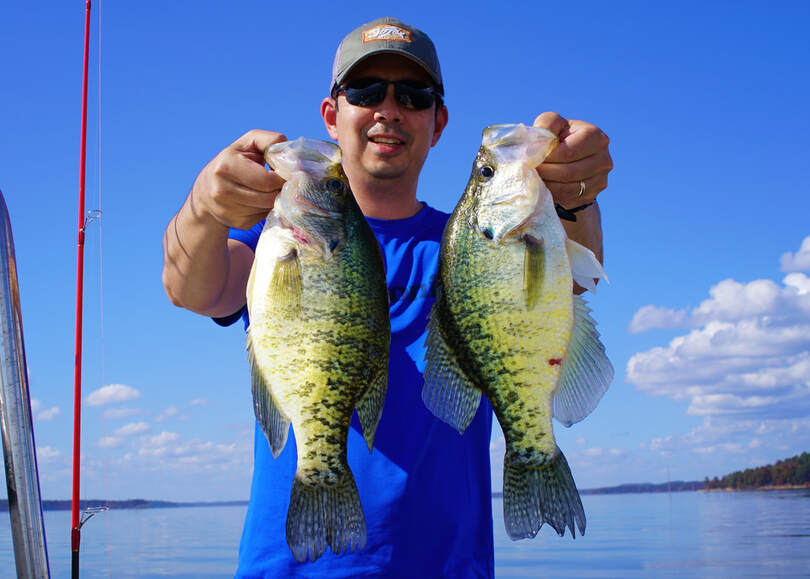 A couple of big White Crappie with good coloration
On Day 2, I told Marty I just wanted to target large individual fish.  We went away from where others were fishing and fished spots that had few but bigger fish.  Fishing started a little slow; it was foggy and I was just getting a small fish here or there.  Early on my braid got wrapped around the tip of my rod and when I set the hook on a fish it snapped.  That was my favorite Crappie rod (Phenix Iron Feather), so I was pretty bummed.  However, Marty's gear was just fine and fishing started to pick up once the morning fog lifted. 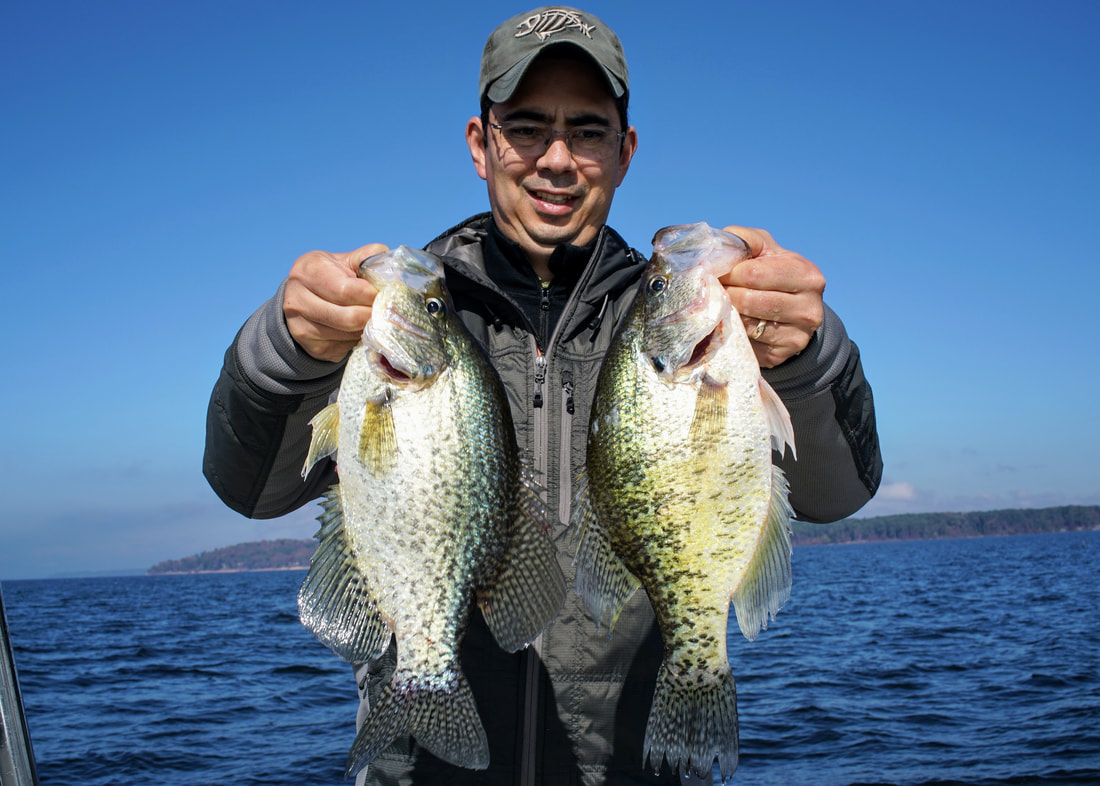 Some early morning slabs on Day 2
As the day got warmer, the fishing got better.  Each new tree would have 1-3 large catchable fish, and I found if I was able to catch the shallowest fish first, it often wouldn't spook the deeper fish and I could work my way down the tree.  By 2pm, I had worked my way past 40 fish with an average size of around 13.5-14" and some bigger ones thrown in. 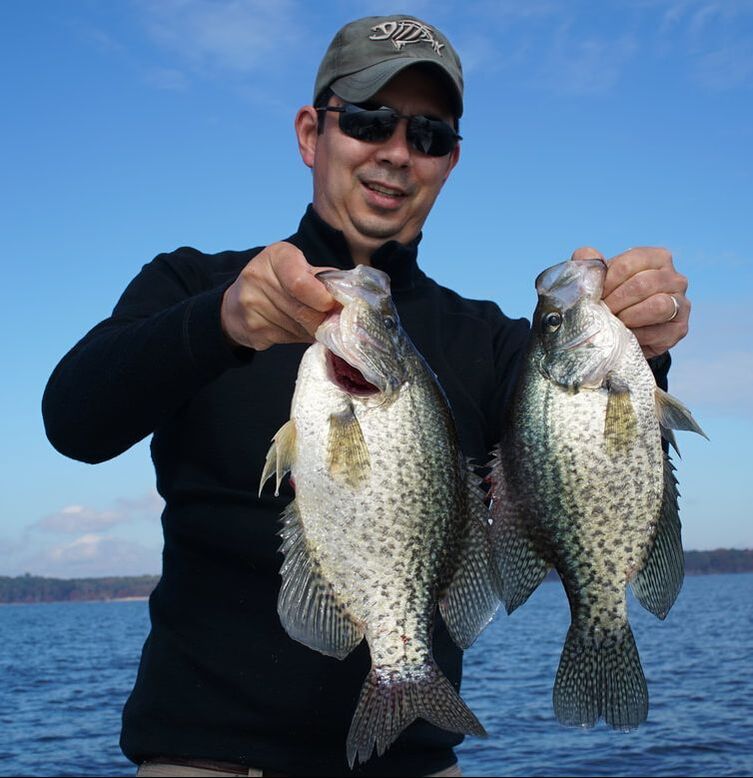 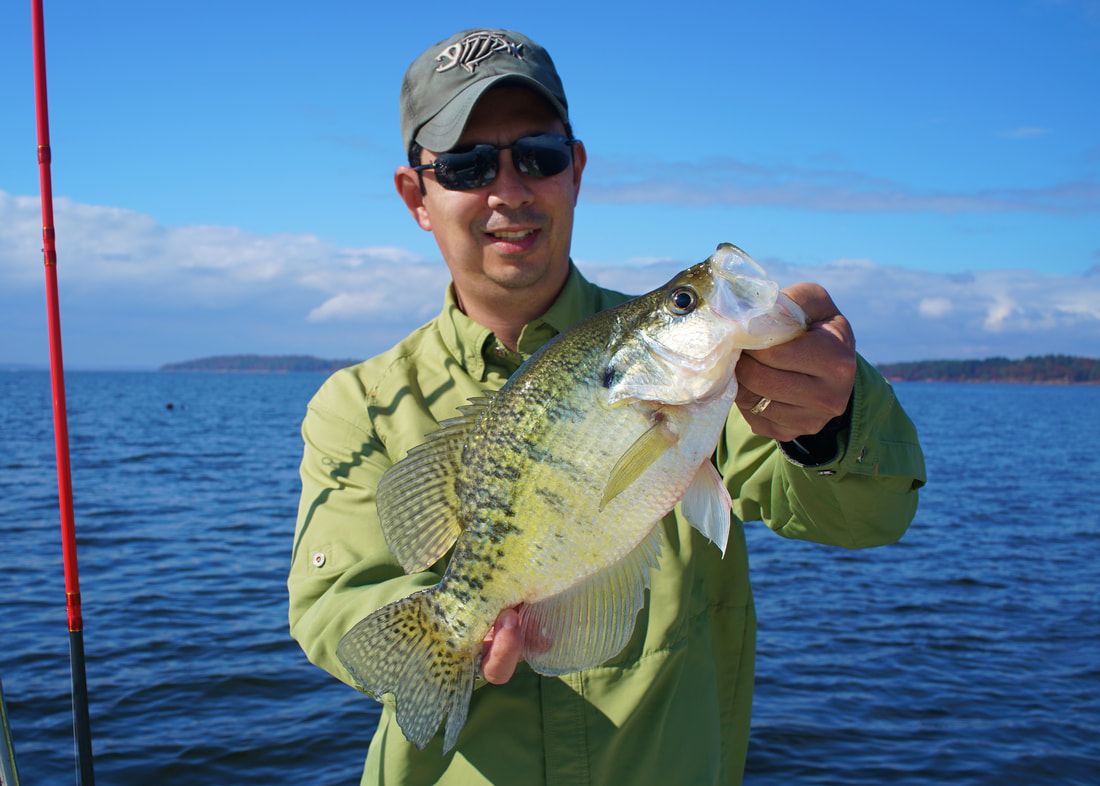 A big White Crappie caught late on Day 2
I had to wrap up a little earlier on Day 2 in order to pick up my wife and make the drive home.  Fortunately, the last fish of the day was by far the biggest.  It looked like an absolute monster when it hit the deck.  I took a couple pics and put it back in the water and revived it quickly.  I hate to kill big fish, and by the time the pictures were taken it had been out of the water for a while so I made the decision to release it without measuring it.  It was definitely bigger than the 15.5" fish I had measured previously (and kept), but beyond that I don't know exactly how big it was.  That's ok; I got a good picture.

Overall, this weekend provided the best Crappie fishing I could imagine. Big fish on artificials with beautiful weather.  Thanks to Marty - below is a link to his website:

The last fish of the day, an absolute monster