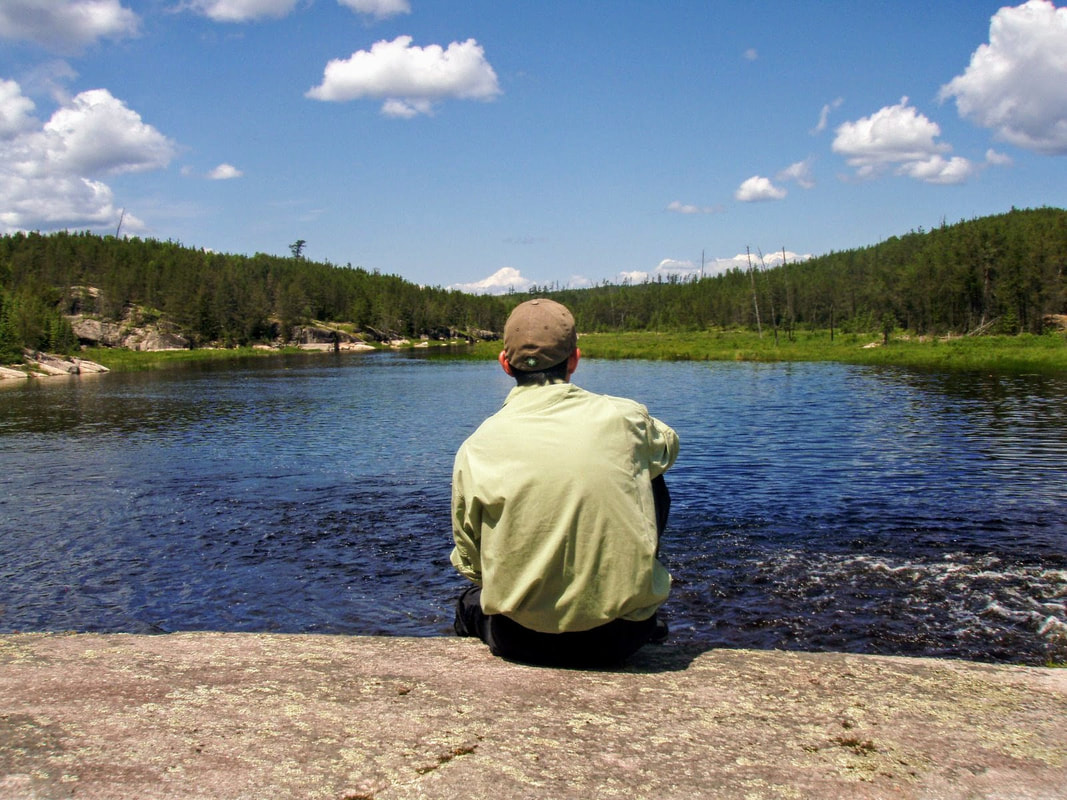 I had never really fished in Canada for northern species like Pike, Walleye, and Smallmouth Bass, so I decided to take a trip with my brother Matt to Hawk Lake Lodge in Ontario, Canada.  Hawk Lake Lodge attracted me because it had exclusive access to many lakes (around 17 if I recall) but was accessible by car.  Getting there was relatively easy; we just flew to Winnipeg and then drove to Kenora, Ontario.  It is incredible how many lakes there are in this part of the world; I lost count of how many we passed on our drive over there.

Hawk Lake Lodge was very comfortable, with some amenities like a hot tub and game room.  It is situated on Hawk Lake, which is the largest of the available lakes at 2600 acres.  Each day you can fish Hawk Lake or decide which of the other different lakes you want to fish and you get it to yourselves (or share with one other boat if it is one of the larger ones).  The other lakes were mostly accessible by ATV.  All of the lakes were extremely scenic and get very little fishing pressure, so it's always a pleasure to fish in places like that.

My brother is not a big fisherman and I had not caught these species before, so I was a little apprehensive about how we would do, especially since we were self-guiding much of the time and my brother was not much for getting up early.  However, there were fortunately many hungry fish in this place, and we did hire guides some of the time and they gave us pointers.  On the first day we fished Saphire Lake, which was chock full of hungry Smallmouth Bass.  Visibility was very good and you could often sight-fish bass cruising near the bottom.  Using watermelon green Senkos, I caught 45 and my brother caught 35, with the biggest going 18.5".  That was probably the best day of the trip for Bass in terms of size and quantity. 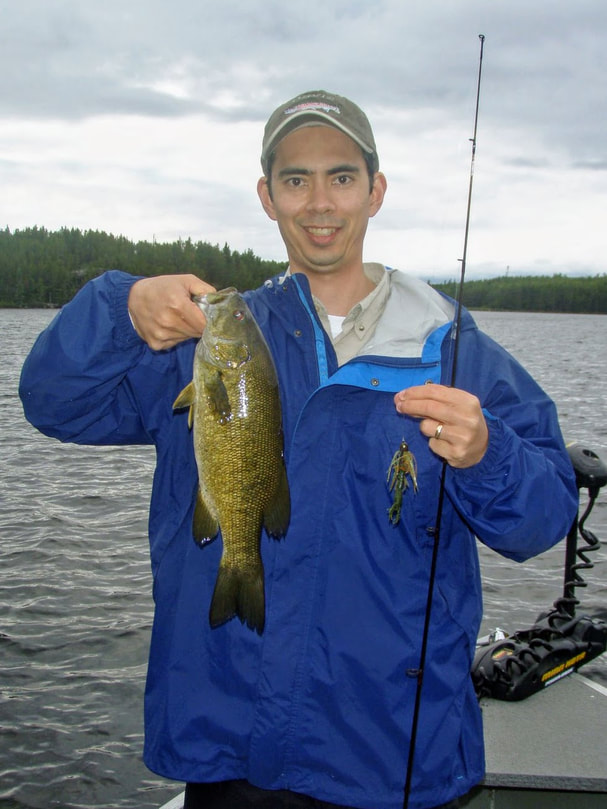 My first ever Smallmouth Bass, caught on a Bitsy Bug jig
On the second day we tried Viaduct Lake, with only a small pike and a bass to show for it.  We moved over to Bear Lake, where we caught about 12 bass between us.  In the afternoon, we went back to Hawk Lake and caught another 15 or so medium size bass, along with 3 pike.  The biggest of the pike was around 35" and was caught on a small leech by my brother.  However, it got tangled in the net and we were not able to get a good picture of it.  As soon as the picture was taken, it did a crazy flip and somehow untangled itself and landed back in the water. 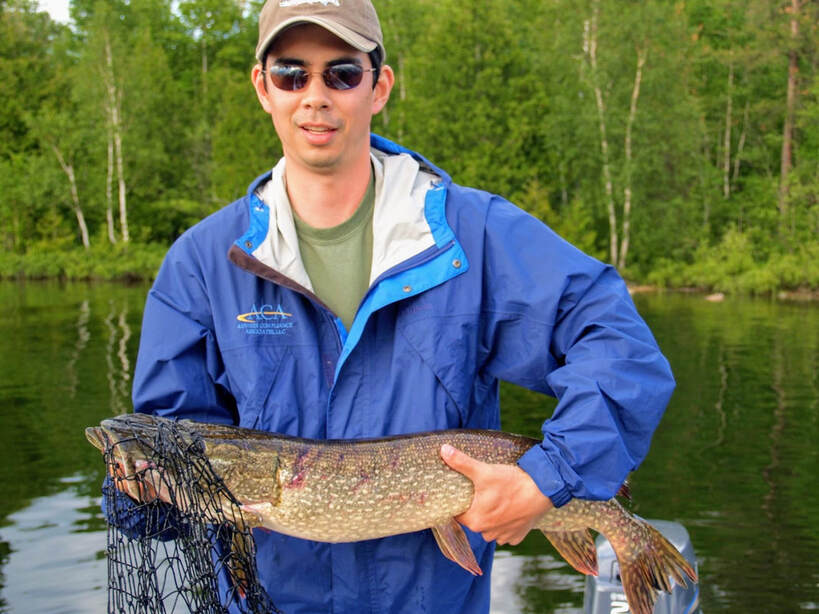 A rather poor photo of our biggest Pike of the trip tangled in the net. Right after this pic it somehow freed itself.
On Day 3 we tried Wolf Lake in the morning where I landed 20 bass and Matt got 6, mostly on Senkos.  In the afternoon, we were back in Hawk Lake where we trolled up a really nice Walleye on a Shad Rap and I got some more bass on topwaters.  Hawk Lake did not have a lot of Walleye, but it had some nice ones. 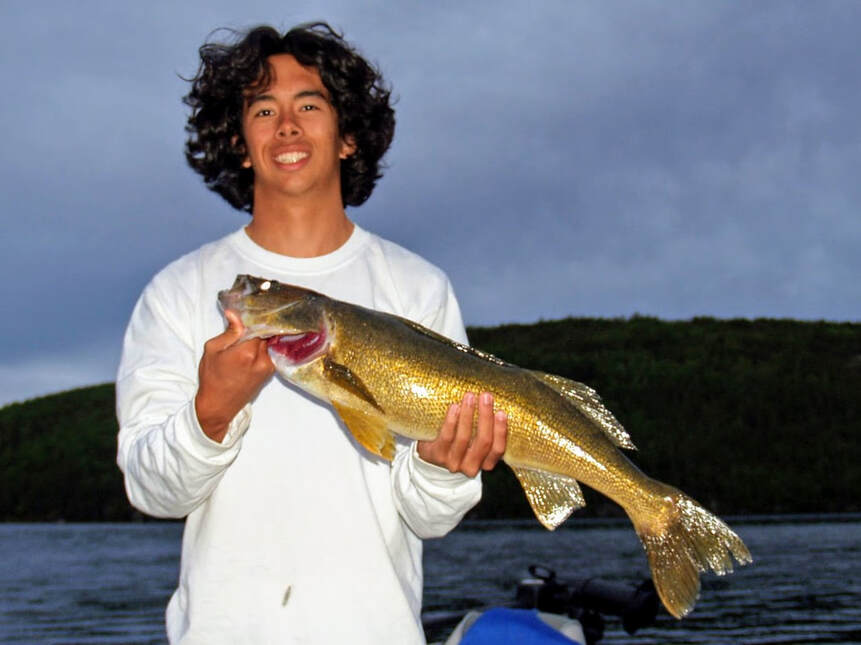 Matt's big Walleye
Day 4 we decided to take it easy and just did a little fishing in Hawk Lake.  Highlight of the day was this Walleye.  We also tried out my float tubes, which are a great way to catch fish but we had only modest success. 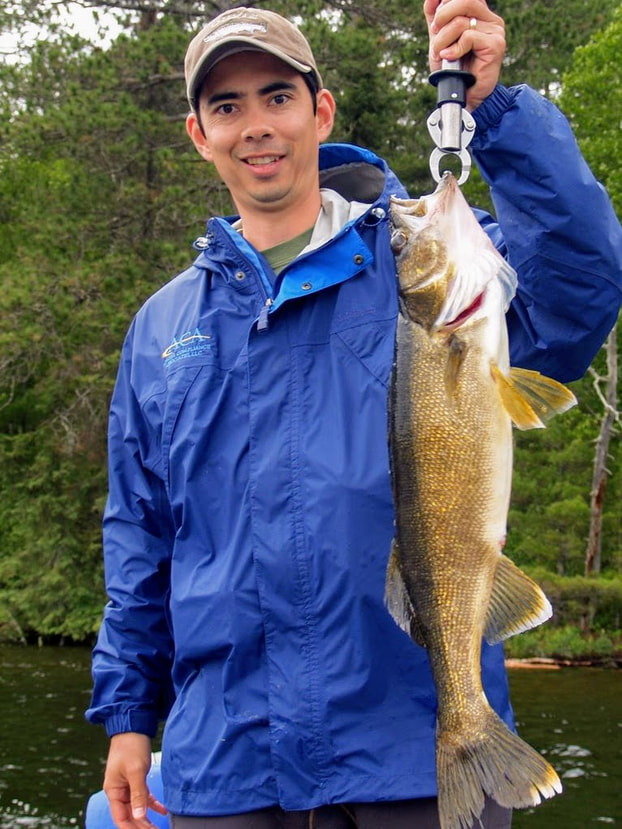 Big Walleye caught in Hawk Lake
Day 5 we went to Blue Herring Lake, which is known for numbers of smaller bass.  It did not disappoint as we combined for around 80 of them on Senkos in just a few hours in the morning.  It was a good thing we packed a lot of Senkos.  Many of the bass were found in front of beaver dams; some dams yielded 20+ fish before they wised up.

In the afternoon we fished a little at Hawk Lake and caught some Pike.
Our total for the 5 days was 220 Smallmouth Bass, 7 Pike, and 2 Walleye.  We could have done quite a bit better if we applied ourselves, got up early, fished harder, etc but we were taking it a little easier than I usually do on a fishing trip.  If I were to go again I think I would try to concentrate more on the Walleye, as there are some really nice ones there.  There are also some Lake Trout, but they are mostly caught earlier in the season and I didn't hear of any caught while we were there.  All in all a very nice trip with some new species for both of us.  Hawk Lake Lodge was just as advertised and we had a great time:  www.hawk-lake.com 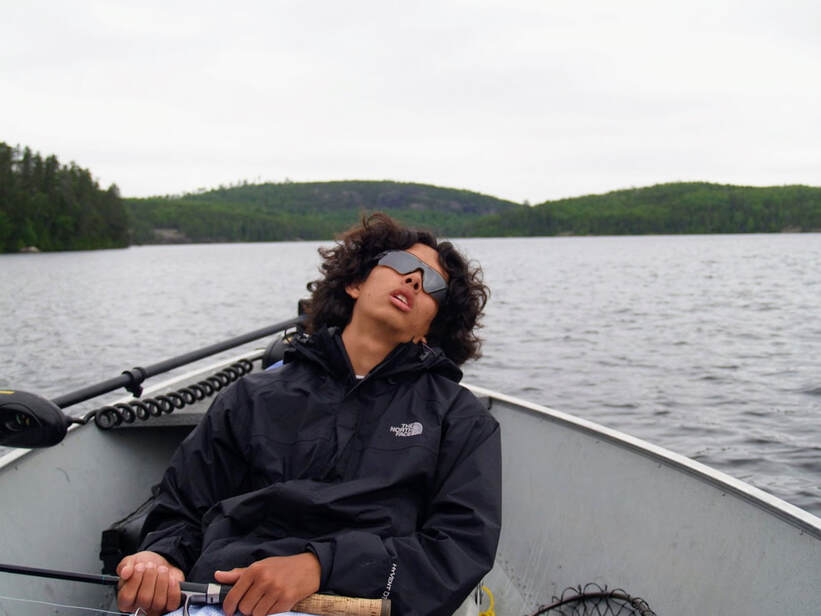 My brother Matt did not always take the fishing very seriously 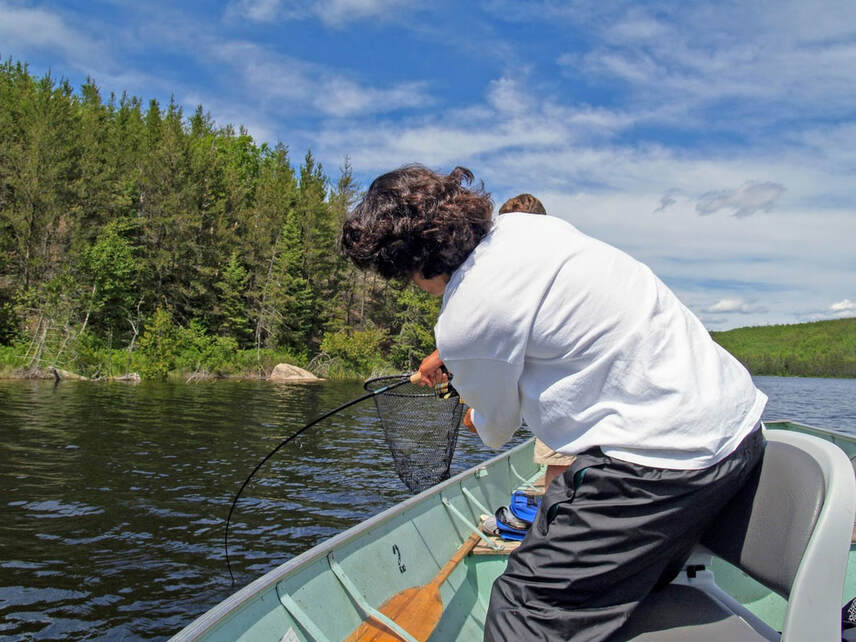 Trying to get a bass into the net 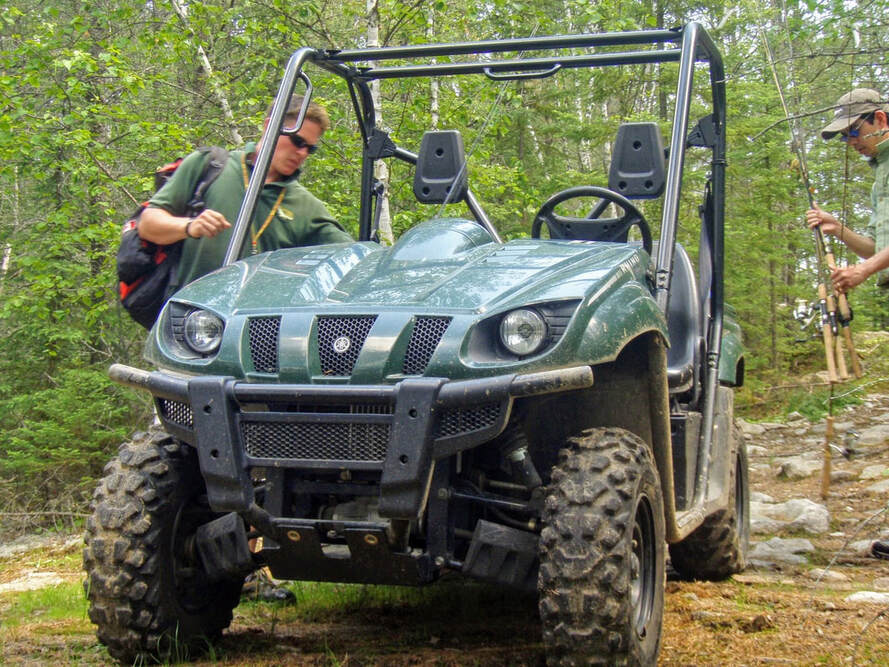 Heading out to one of the lakes 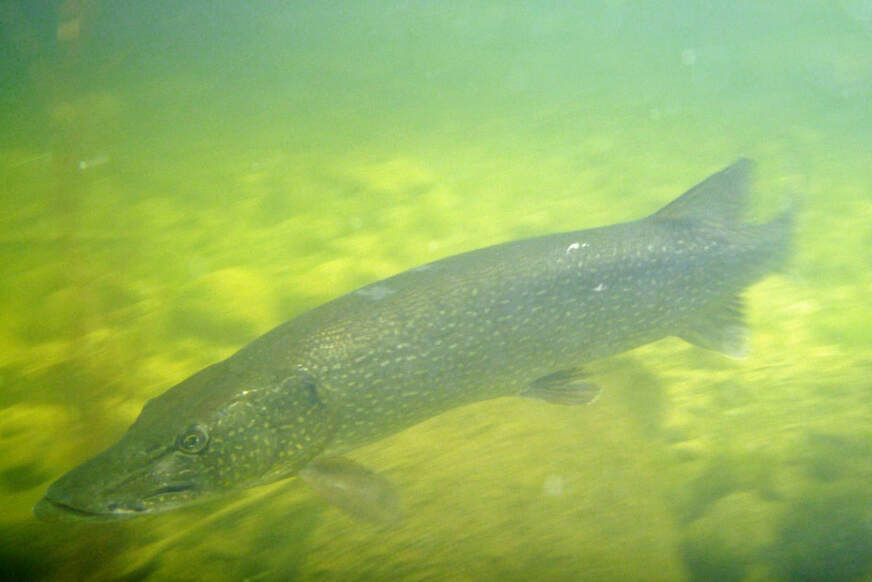 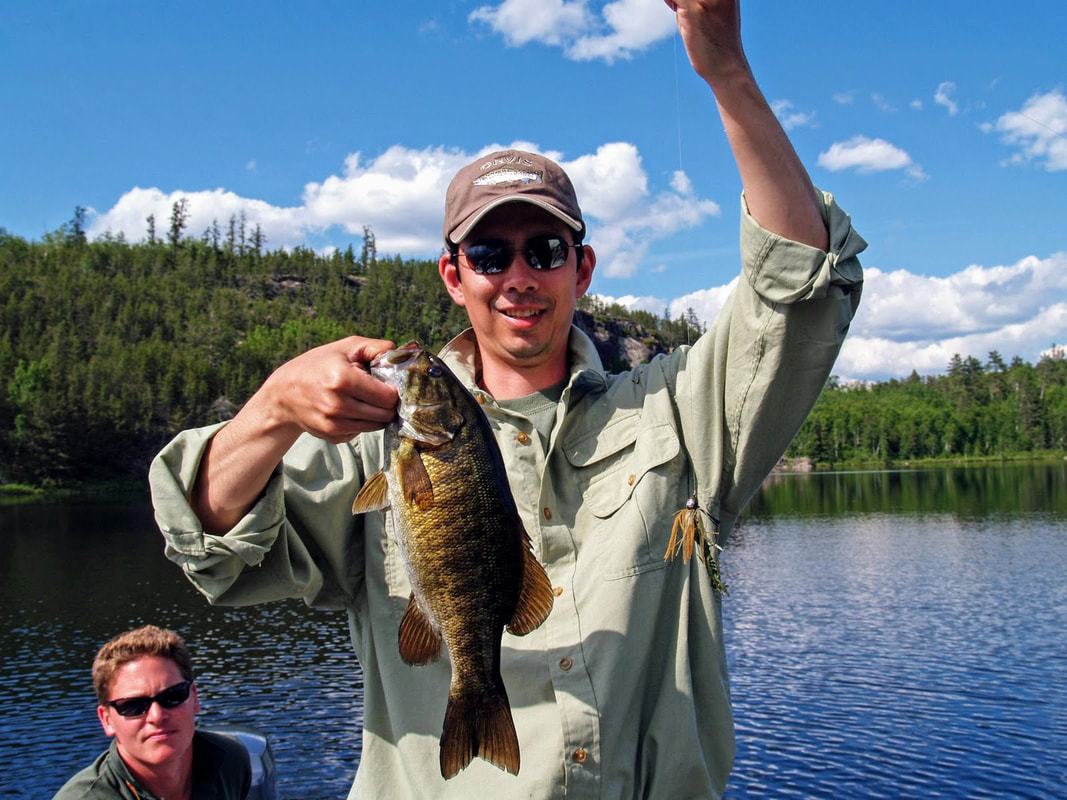 Another bass on the Bitsy Bug