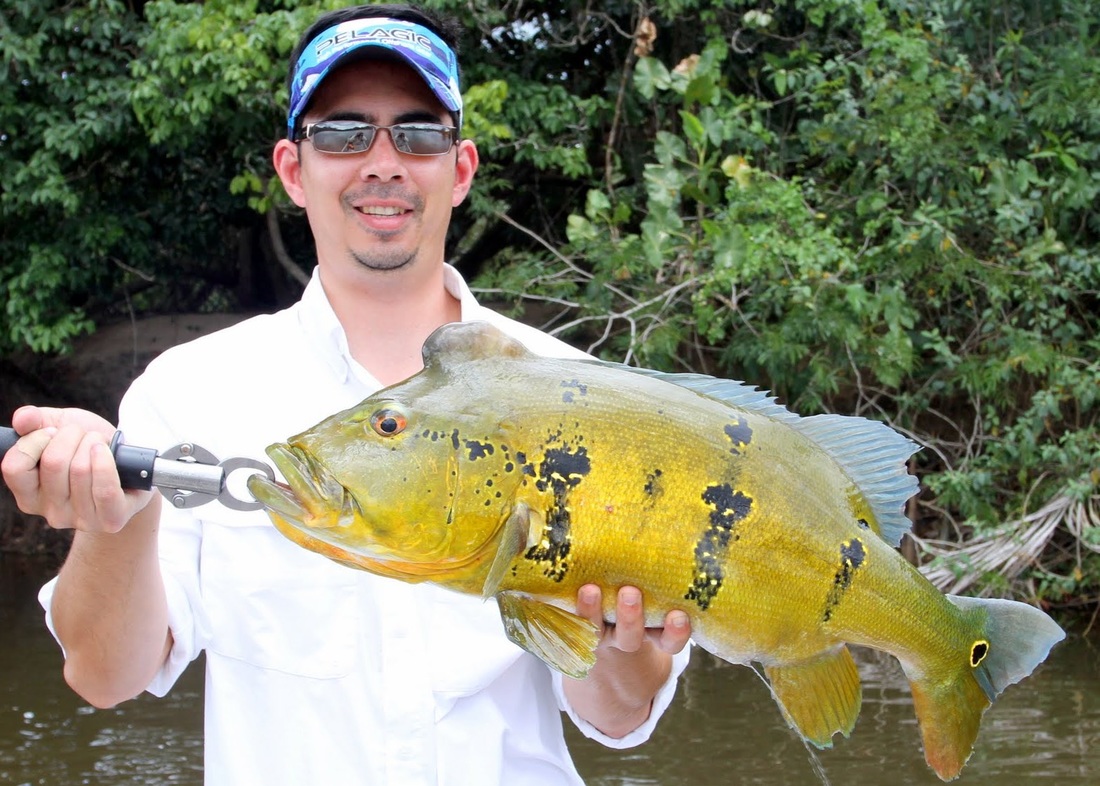 I made the trek down to the Rio Travessao in Brazil. That is not the real name of the river, but the outfitter wants to keep the name secret to keep it uncrowded which I respect.  There is a lot of competition down there for quality fisheries.  It is a different type of river than what most people go to in brazil. It is relatively fast flowing and does not have the lagoons that most rivers farther south have. There are some mild rapids and lots of rocks. Other than a couple of scattered tiny indigenous villages (the closest was about a half hour away and had only about 30 people) there are no people there and no sport fishing pressure. We were one of the first groups ever to sport fish this part of the river. There were 6 of us and we slept in tents on a small sand island in the middle of the river. The trip was organized by Acute Angling, which is a good outfitter. This was my third trip with them.

Fishing was focused on peacock bass, wolf fish, and various amazon catfish. The peacock bass here max out around 15lbs, which is a little smaller than in some of the other rivers that are more commonly fished. However, the average size is much larger than on any other river I have heard of at around 9 lbs. About half the fish I caught for the week were 10 lbs or better which is a really nice size on bass tackle. The biggest ones I caught were two 13 lbers. These peacocks are actually a different species and are only found on this river as far as I know. They are a brilliant yellow color with lots of green. Most of the ones we caught had large humps on their heads which I believe indicates that they are spawning males. They were really spectacular looking fish.

The wolf fish, called trairao in brazil and Aymara in Venezuela, are really an underrated gamefish. They readily crush surface lures and jump repeatedly when hooked. Their mouths are very hard and they often throw the hook. They have wicked teeth and sometimes bit through wire leaders. They get over 40lbs but generally the biggest ones are caught on bait. The biggest one I caught this trip weighed 18lbs and was caught on a chunk of piranha. The biggest ones I landed on lures were a pair of 12lbers but I lost some bigger ones. There are a lot of things that can go wrong when fishing for those things so you just have to set the hook hard several times and pray. If they weren't so ugly they would be a very popular game fish. There are small ones in other parts of the amazon that are kind of a nuisance because they tear up your tackle but the larger ones are a blast to catch and well worth targeting.

The third main target was catfish. We spent an hour or two at the end of the day fishing for these using small wolf fish for bait. There are some really cool looking species down there. The largest are the Piraiba, which get to over 300lbs. I didn't get any but one guy caught a 165lber and a 125lber. I did get a couple of redtail catfish around 40lbs and some junjia catfish of 17 and 12 lbs. catfishing was kind of slow but when you did hook one they really pulled. One guy focused just on catfish and got a few each day but I don't think any were over 80lbs or so.

Another fish worth mentioning is the piranha. They get absolutely huge here. The average size was about 5lbs and the biggest one I caught was 7 lbs. That is about double the size of the biggest ones I've seen anywhere else. You could catch hundreds of them on bait if you wanted to target them but we all avoided them. You would still catch a few a day on lures. They tore up all the jigs that I was using for peacock bass so I had no jigs the last 3 days. I'm sure my peacock total would have been higher with those jigs as in some spots that was all they would hit. 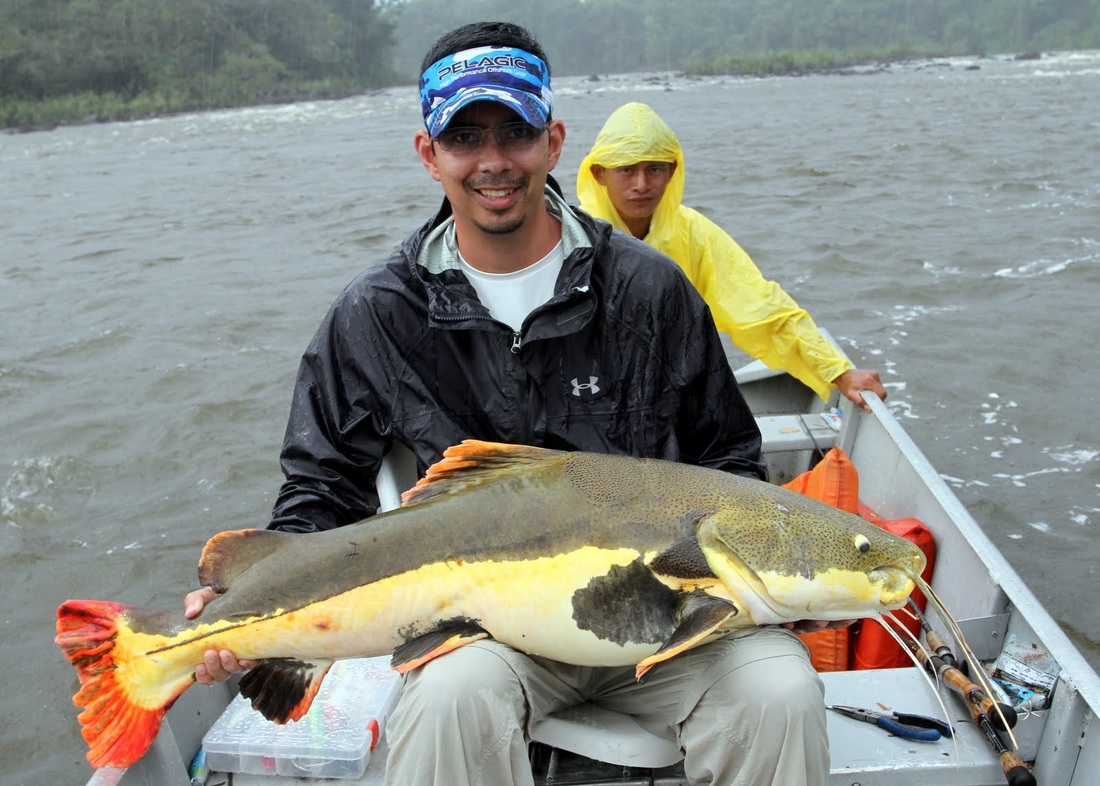 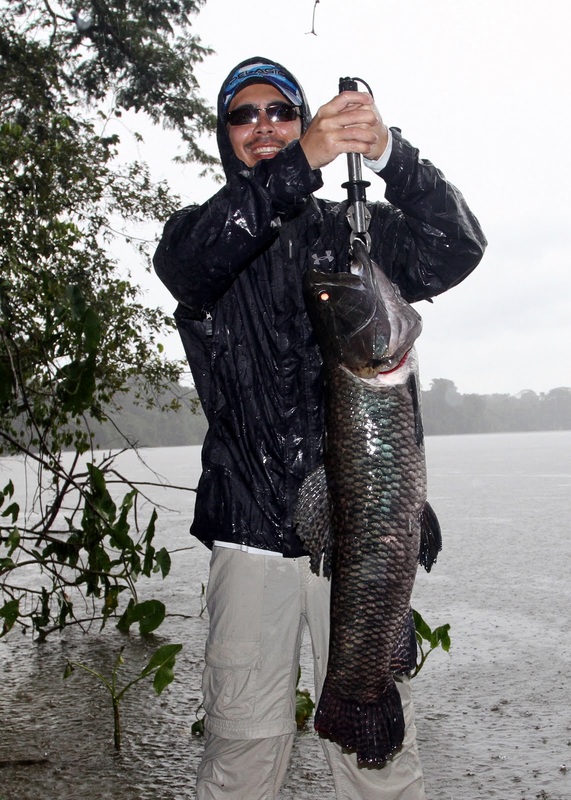 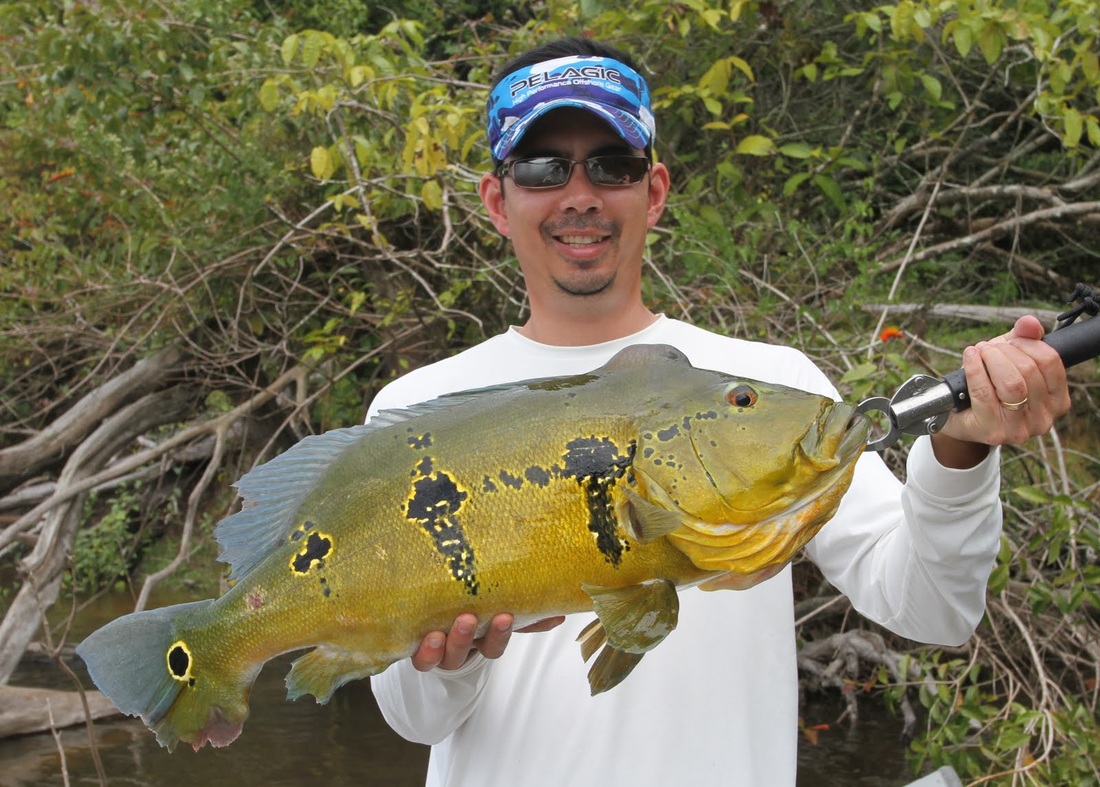 As you might expect, there was a good amount of wildlife. A few kinds of monkeys were swinging around in the trees. They were lots of birds and bats flying around. In the river were giant river otters which are always interesting to see. Probably the coolest things we saw were the electric eels. They were 6 feet long and pretty thick. They must have been spawning or something because in a couple of small backwaters they were packed in tight. They were not scared of the boat and would come over and look at us. Apparently their shock can kill you so we took care not to go in the water where they were or upset them in any way. The water was a little murky but I got some underwater footage of them with my gopro camera.

In summary, this was a good trip but not for everyone. I wouldn't recommend it if you like creature comforts as it was tent camping. Bathing was in the river. It rained every day for an hour or two and it was difficult to dry stuff. The camp was very comfortable with a generator and a staff to cook. Meals were basic but good. Mostly fish caught that day. You had to be very careful about not accidentally drinking any river water. I was careful and still got a little sick but I took some cipro and immediately felt better. This is not a trip for non fishing partners as there is nothing else to do.

If you haven't been to the amazon then I don't recommend this as a first trip. Instead I would recommend one of the more traditional trips that focuses on peacocks. However, if you want something different this might be the trip for you. 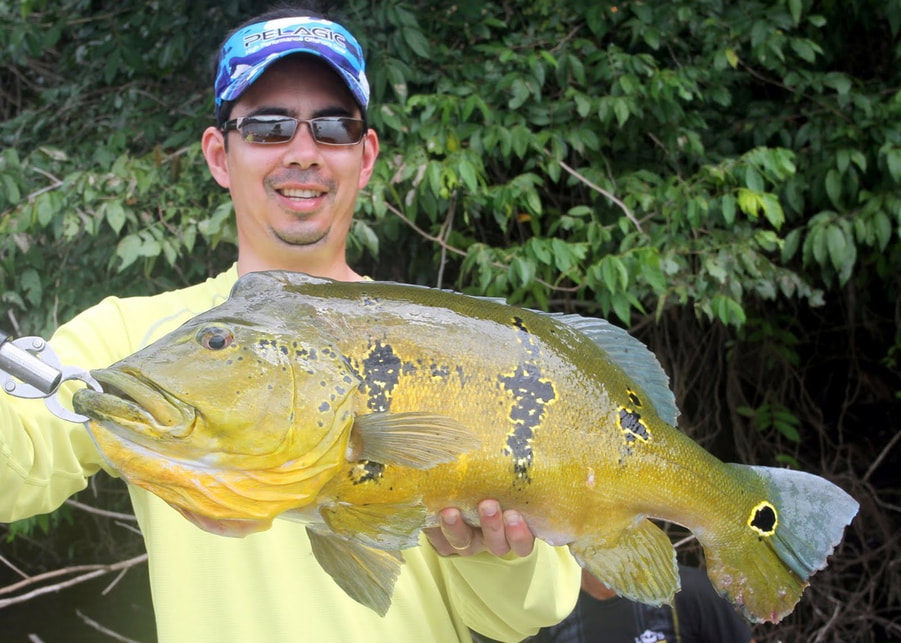 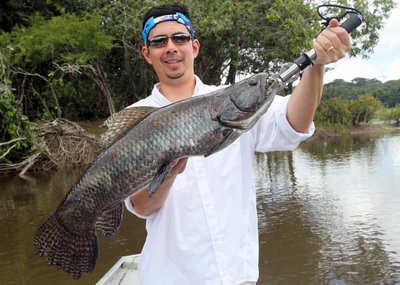 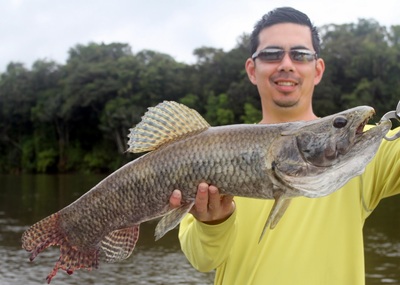 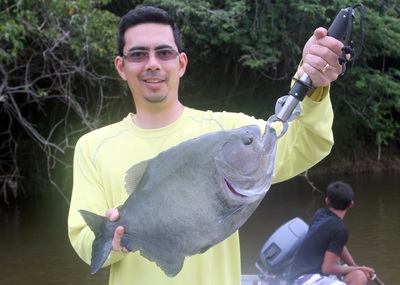 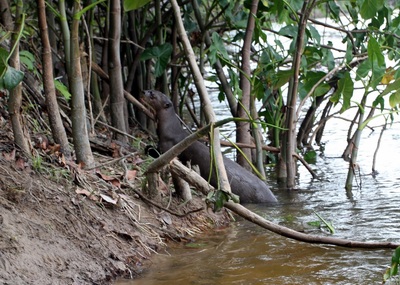 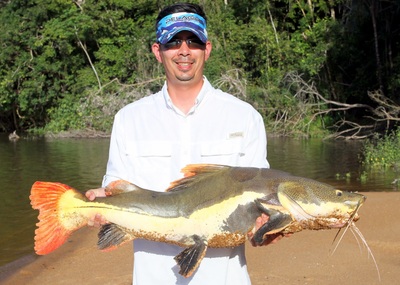 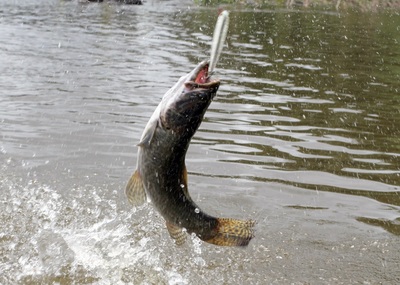 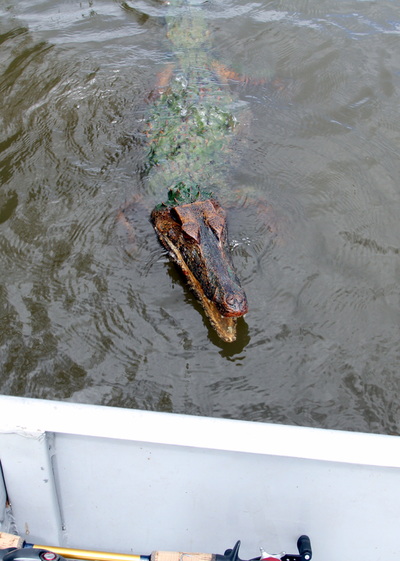 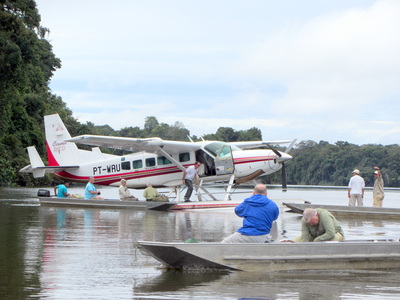 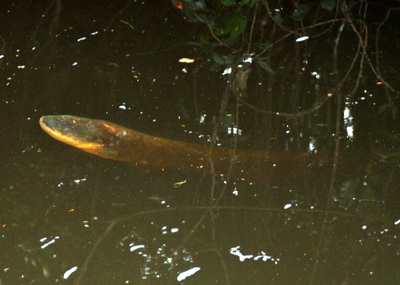 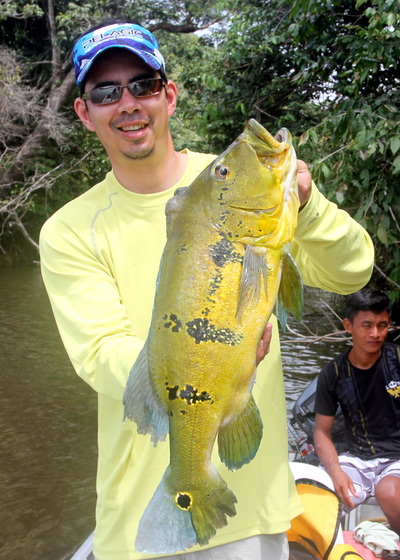 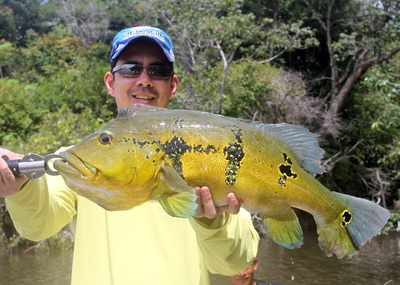 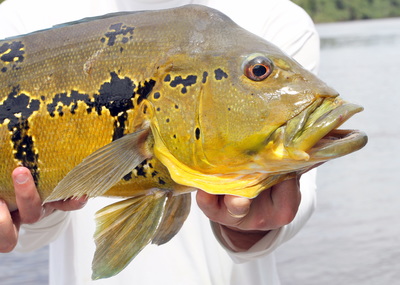 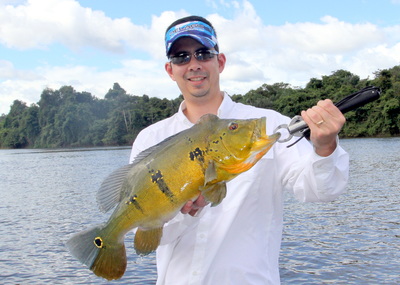 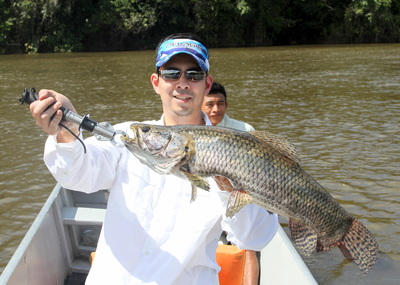 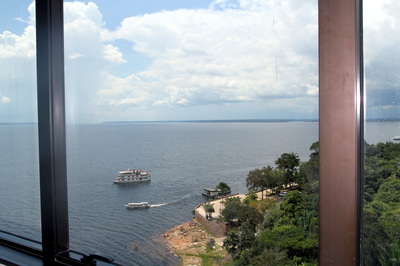