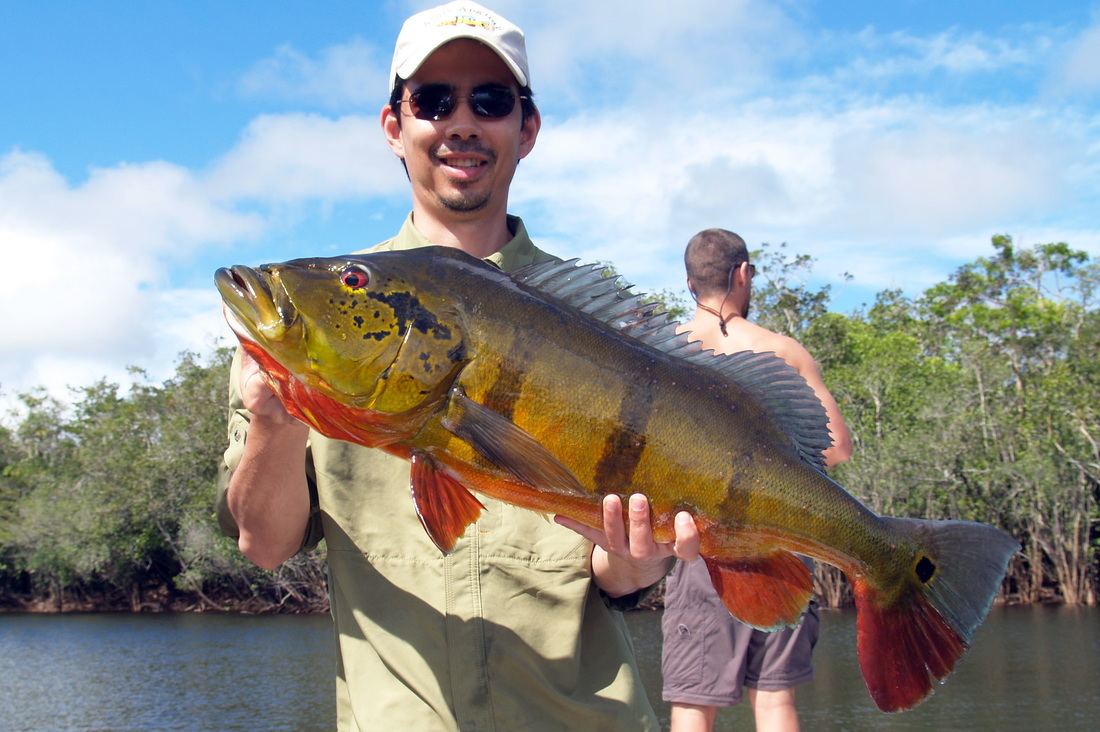 Fishing on this trip was phenomenal. My partner and I caught about 50 peacock bass per day, per person. We also caught 10-20 exotic misc fish per day (piranha, trieda, arowana, bicuda, jacunda, etc). The average size was around 3-5lbs and we got some double digit fish each day. There were three kinds of peacocks: butterfly (smallest and most common), speckled, and three-bar. My biggest was a 19.5lber, followed by a 16, a 15, some 14s, etc. My partner had a similar catch; I think his biggest was 18. Most fish were caught on brightly colored bucktail jigs whipped erratically on a fast retrieve. I also caught some nice fish on woodchoppers but those were a lot of work and didn't catch the other exotic fish. I also caught some fish on Yo-Zuri Crystal minnows and Rapala X-Raps. We tried live bait for about a minute and it was immediately devoured by piranhas. Made the water boil like in a movie and reduced our big 14 inch bait to a skeleton. My biggest peacock was caught on a bed. My guide was insistent that they would not eat when on the bed, but I was able to convince him to stay for a while to try. Conventional approaches indeed did not work. However, I tried lobbing a jig into the middle of the bed and just letting it sit there for about 10 mins, occasionally jiggling it. The big peacock tried to ignore it but eventually couldn't stand it any longer and hit the jig. I caught three big fish off beds (actually two since one 16lber spit the hook) and made a believer out of my guide.  Once released, the fish went right back to the beds.

Lodging for this trip was on mobile cabin barges; two anglers per barge. You'd better really get along with the person you are bunking with because you end up spending 24/7 together between fishing, eating, and sleeping. I lucked out and got a guy who was very easy to get along with. There was an obnoxious guy on my trip and if I had to room with him and share a boat the trip would have sucked regardless of fish caught.

I highly recommend this trip. The Amazon was nothing like it seems in the movies; it was beautiful and pristine. Sort of like I would imagine the Garden of Eden being like. The water was clear and you could always see hundreds of fish, turtles, brightly patterned stingrays, etc. There were also lots of pink river dolphins, some giant river otters, and ever present giant caiman. The caiman, which are like a crocodile, would follow the boats around trying to grab a peacock being reeled in. They didn't have much luck. They were pretty fearless and my guide would occasionally have to whack one with his oar when it got too close. Most caiman I've seen have been pretty small but these were huge; 14-16ft. Not a good place to go swimming.

If you are thinking of this trip, make sure you go with a reputable outfitter. There is really no way to do this kind of trip right cheaply, so don't try or you will be disappointed. 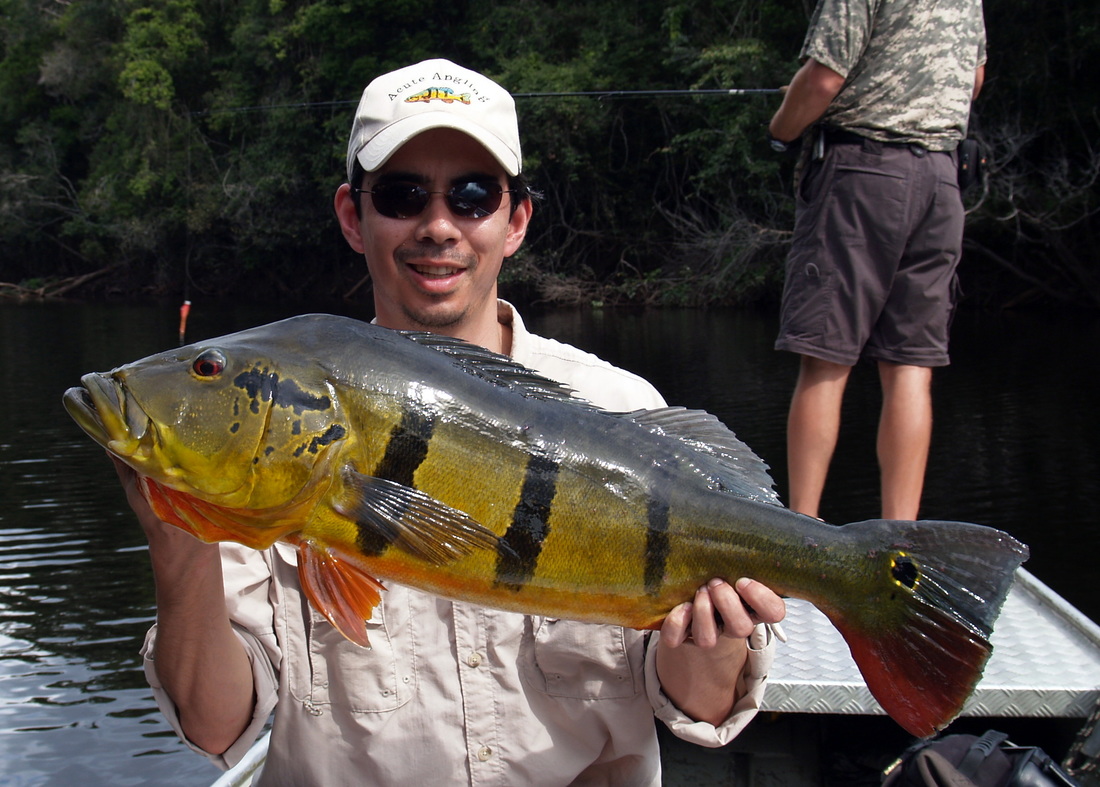 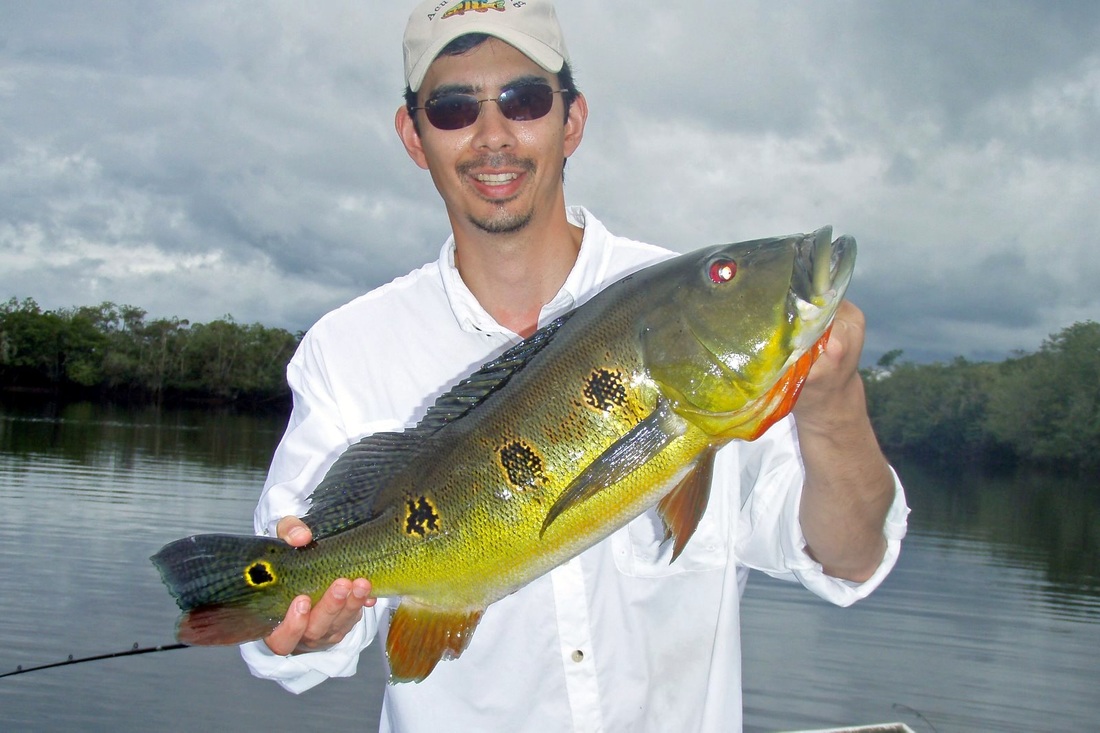 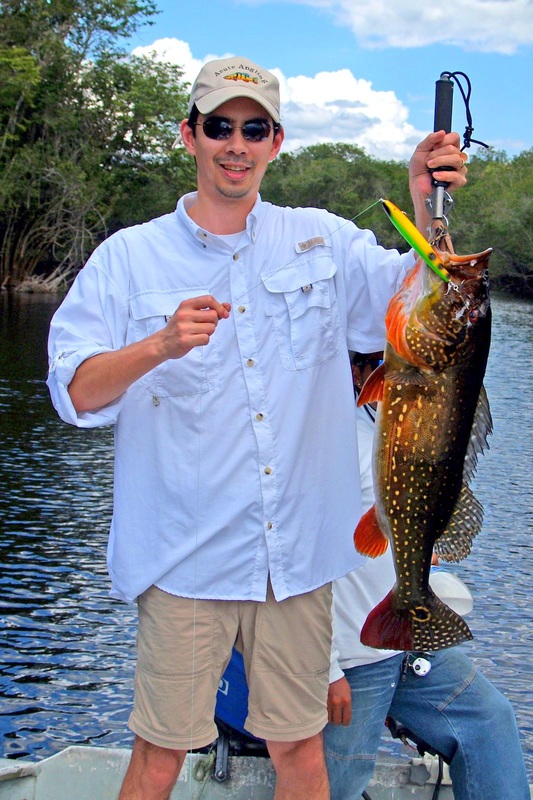 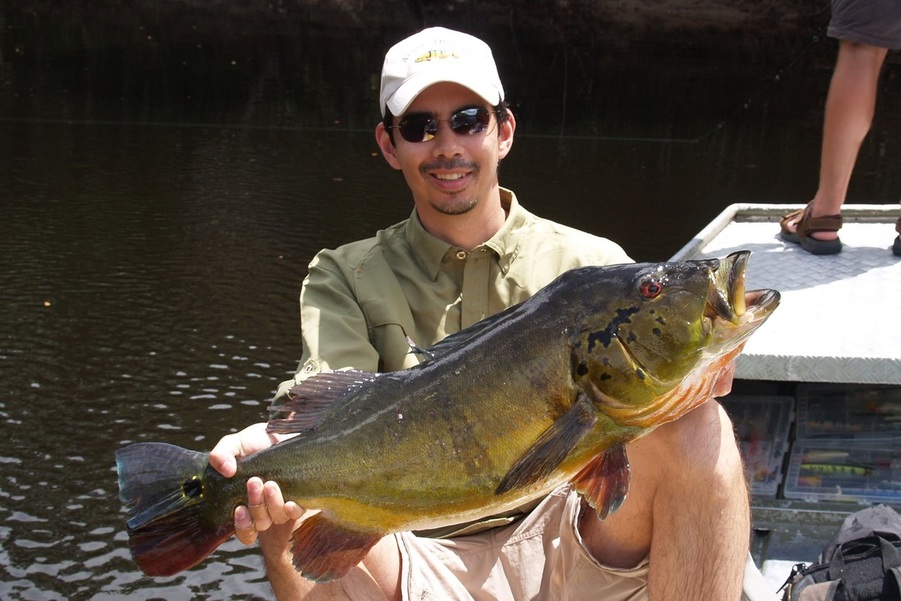 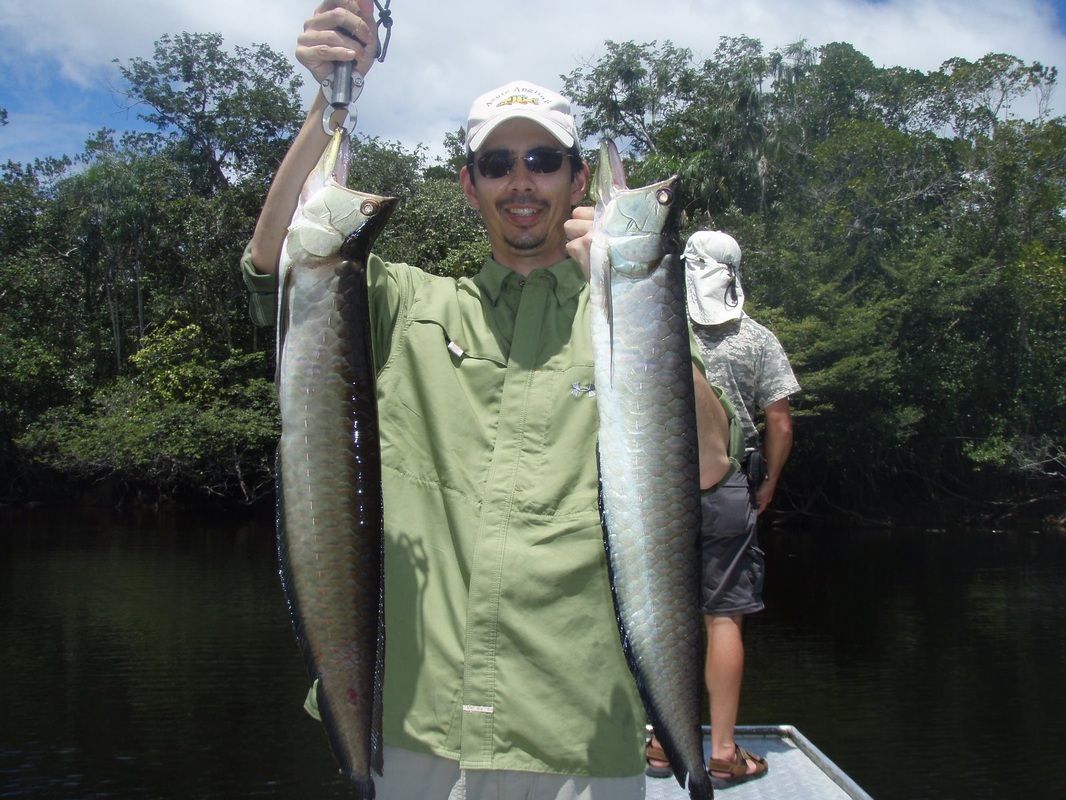 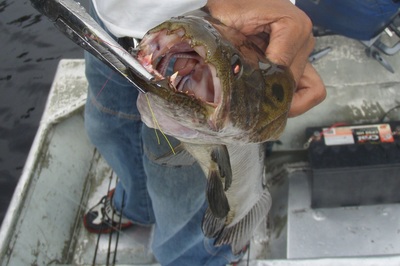 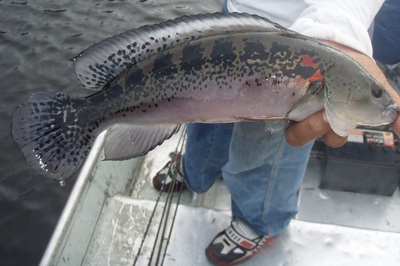 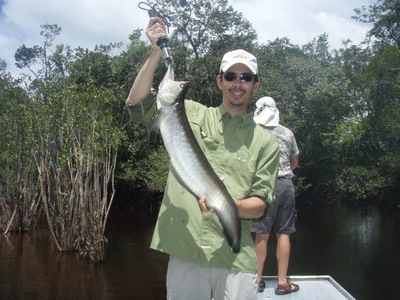 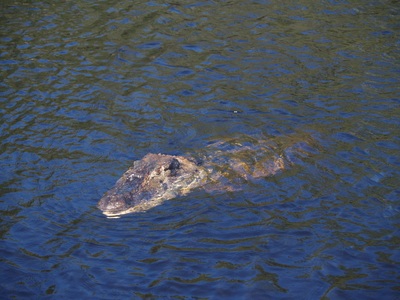 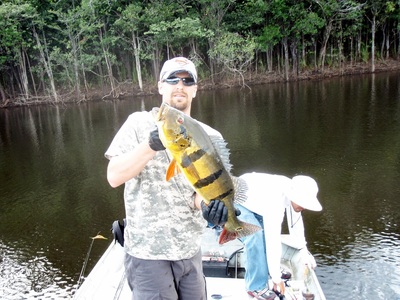 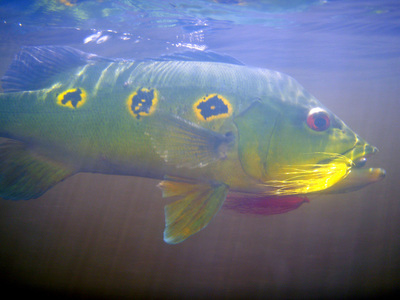 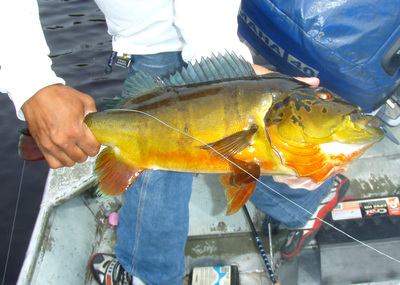 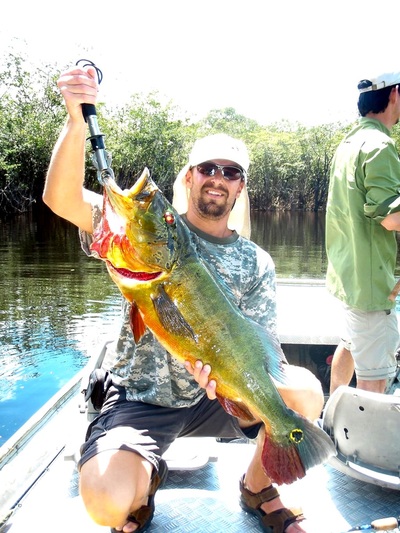 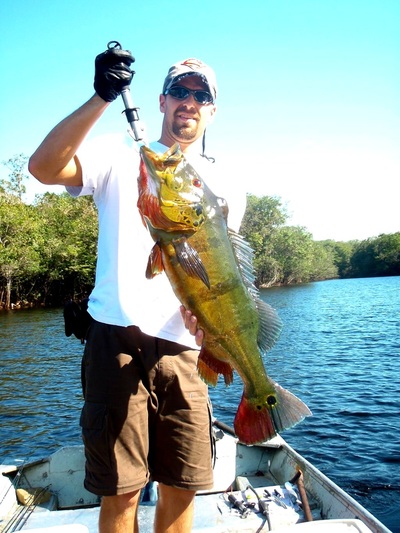 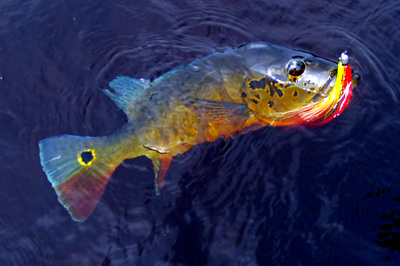 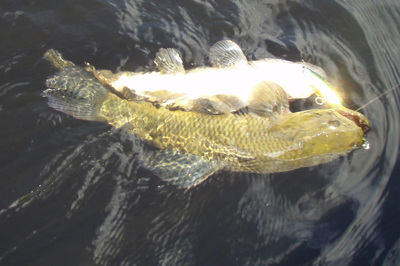 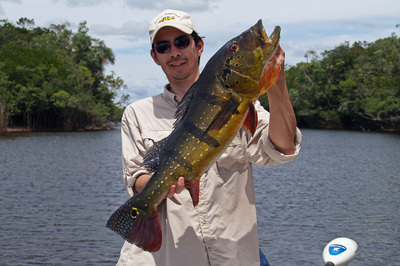 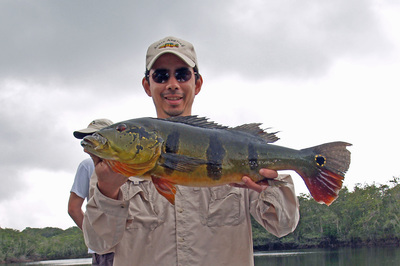 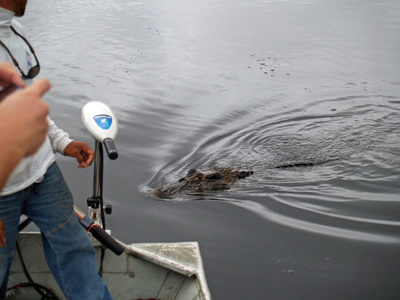 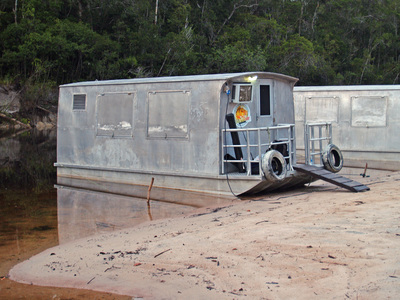 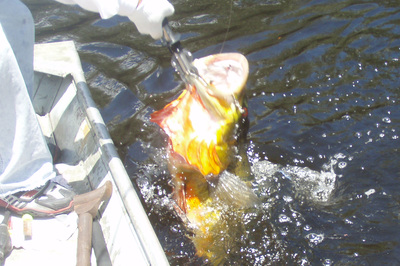 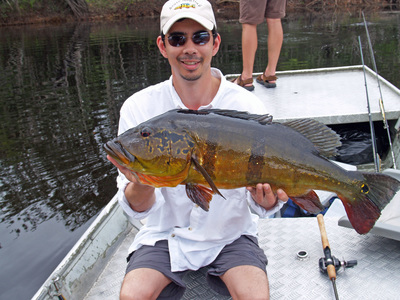 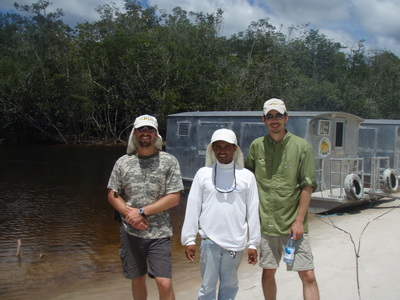 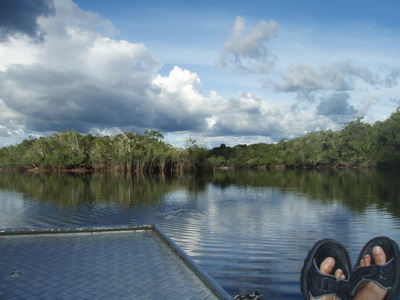