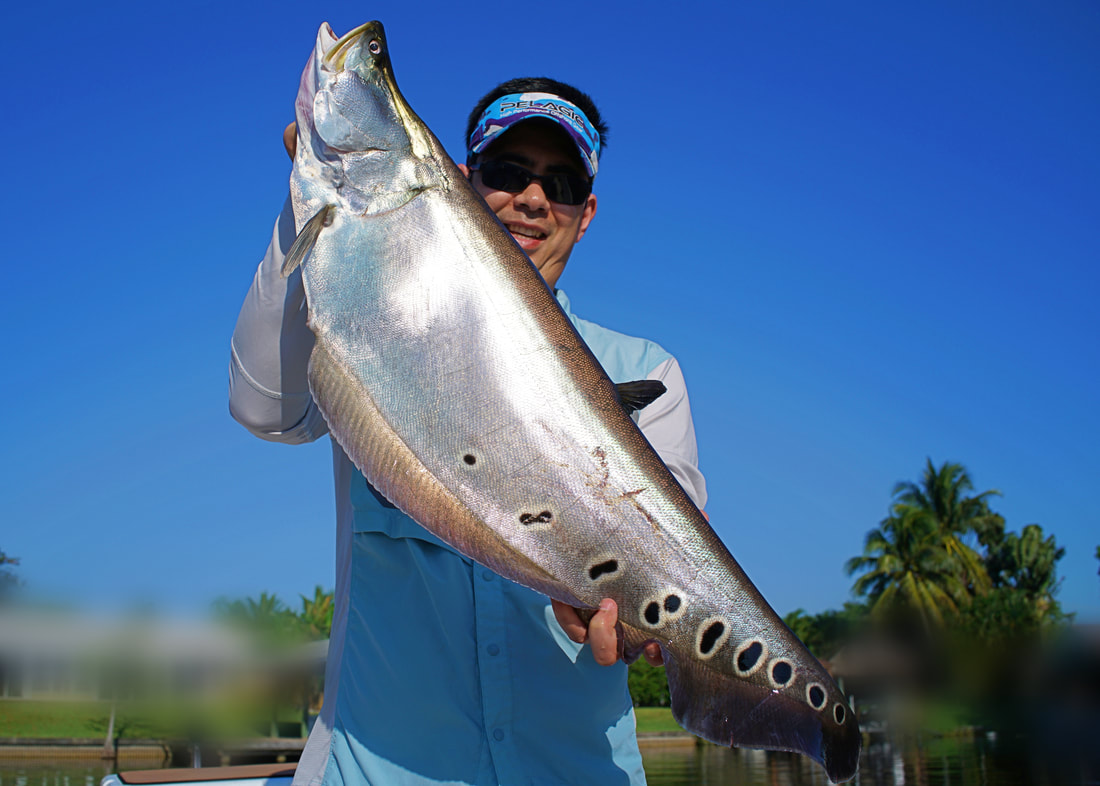 This trip was an add on to a work trip I made to South Florida.  My goal was to land as many exotics as possible, with the ultimate prize being the Clown Knifefish, or Featherback.  I had fished for Peacock Bass and Largemouths in this area on a number of other occasions, and had always been intrigued by the many other species I spotted swimming around.  I decided that for this trip I would put the Peacocks and Largemouths to the side and focus on those other species.
​
Some Internet research indicated that Hai Truong was a guide who might be down to target what I wanted to target, and after exchanging some calls and emails it was clear he was the right guy.  I met up with him on the first day and we started off by catching a bunch of live bait.  While fishing for bait, I was able to catch some nice Spotted Tilapia on bread.  First species crossed off in the first 5 mins; it was a good start. 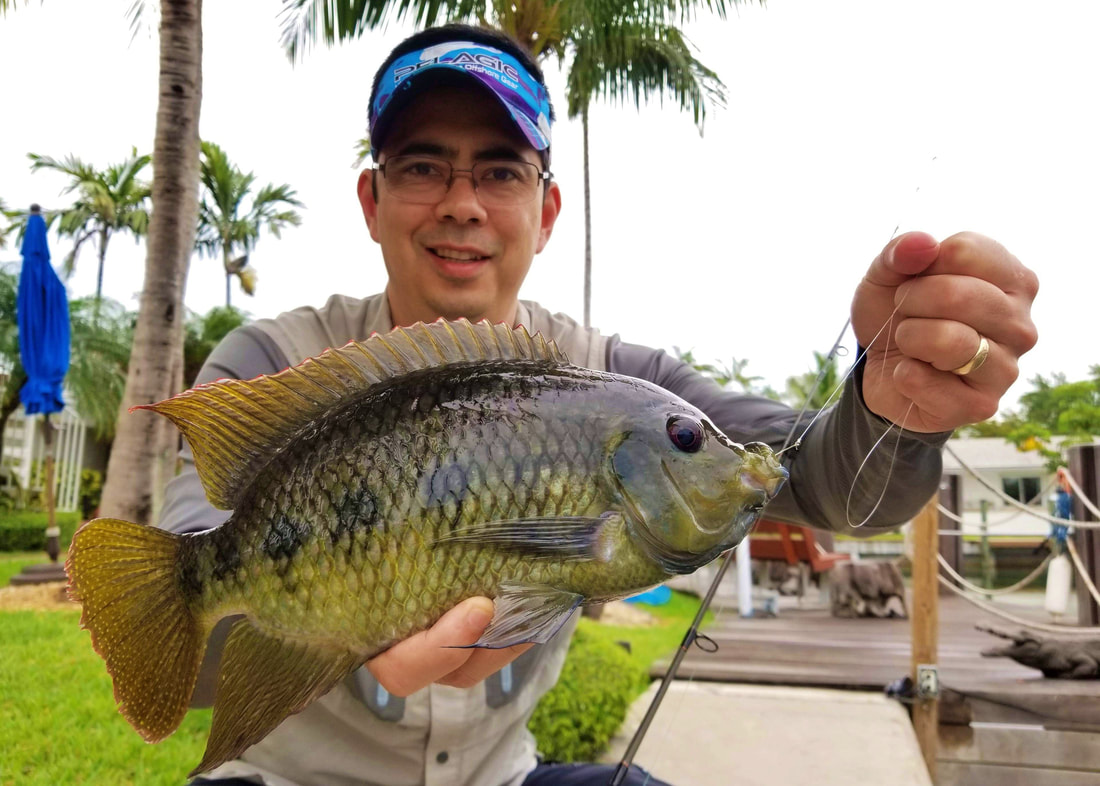 Spotted Tilapia
Hai primarily uses native baitfish and bread when fishing bait.  It’s amazing how many types of fish eat bread.  Hai’s approach involves driving around Miami to fish various public and semi-public spots that are accessible from land.  It’s an interesting type of fishing that I have not seen anyone else offer.  Nearly all of the fish I casted to on the first day were sighted first, and after the first cast we would determine based on body language whether we would be able to get them to eat.

The Midas Cichlid was the next species crossed off of the list, and I got two really nice ones with big humps on their heads on bread.  They are really brightly colored and easy to spot.  They put up a decent fight for their size with their compact and powerful bodies.  The key is to fish them with the right tackle, and the two Daiwa Presso ultralight travel rods I brought were definitely the ticket.  At home I use them for Crappie, but I got some nice Peacocks up to 4lbs on them on this trip along with the smaller cichlids and Tilapia.  Scroll to the bottom for links to buy tackle for all the fish shown. 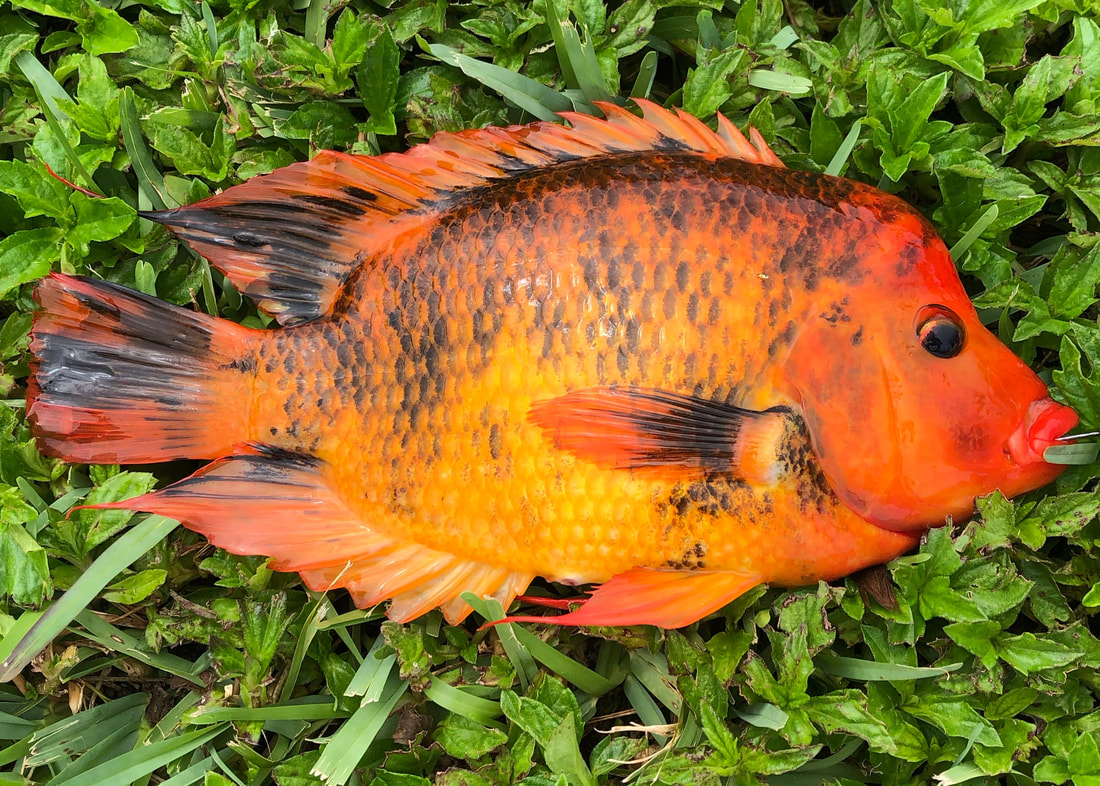 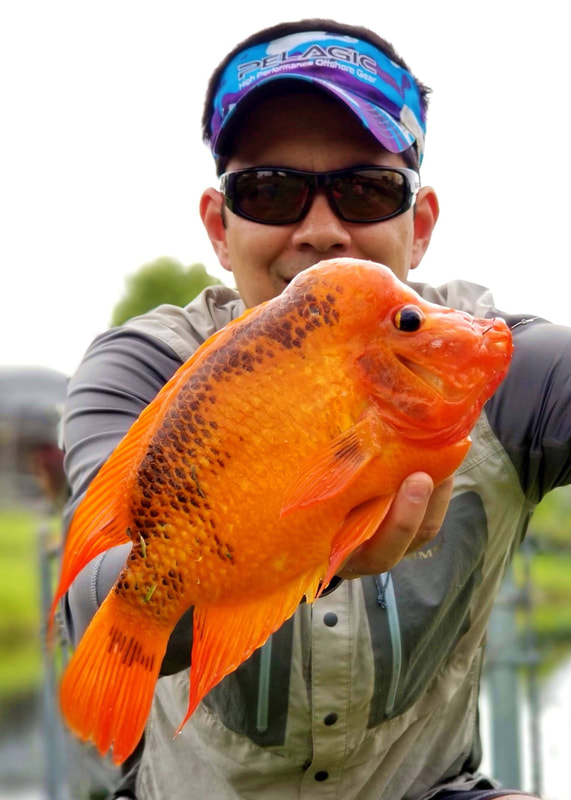 Midas Cichlid with nice hump on head
Peacock Bass could be seen at most of the spots we fished, and I picked up 10-12 of them throughout the day up to around 4lbs.  I hooked many of them on my light rods and they put up some really good fights.  The Peacocks in Miami are the prettiest ones I have seen anywhere, and I have caught them most of the places they can be found (Brazil, Venezuela, Bolivia, Panama, Puerto Rico, Hawaii).  I’m not sure what it is, but their colors are on fire down there. 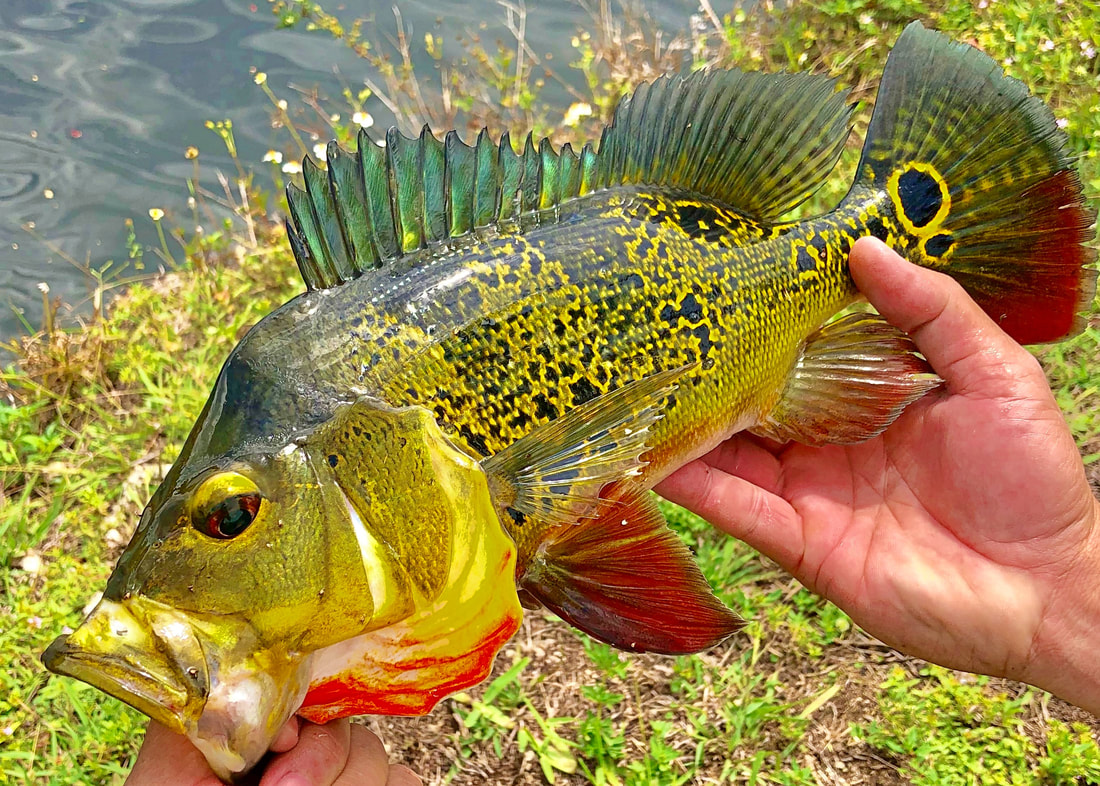 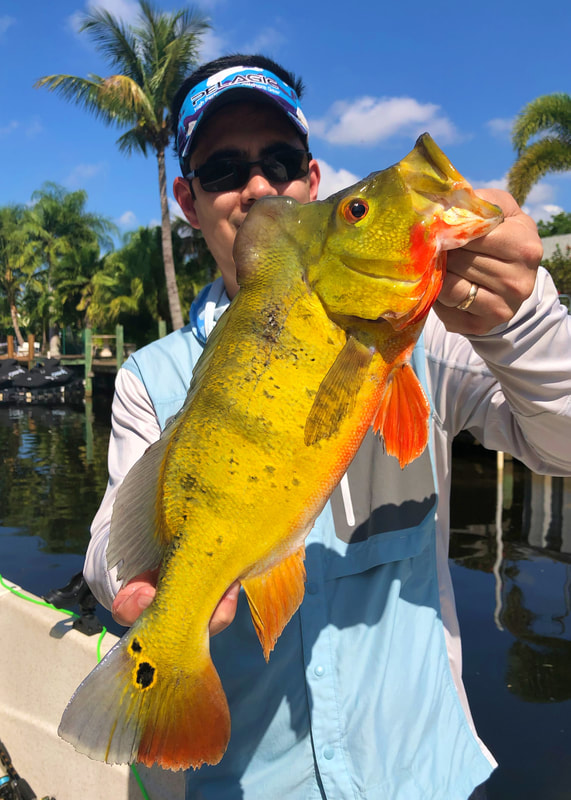 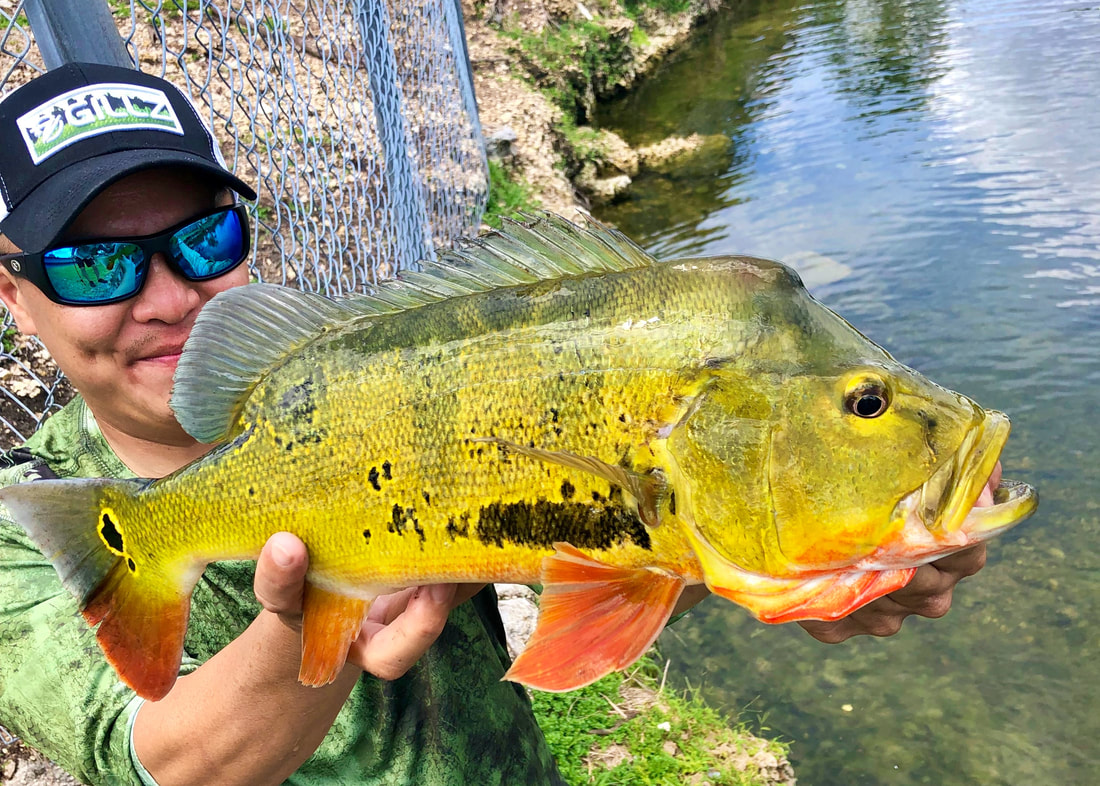 Peacock Bass
Many of the Peacocks we saw were on beds with eggs or guarding small fry.  We avoided fishing for those in order to let them reproduce for the next generation.  I liked that Hai was conscientious like that; the ones on beds and fry are the easiest to catch and are heavily targeted, and that takes a toll on the population.  Midas, Mayan, and other cichlids will quickly snap up eggs and fry if a parent is taken out for even a few minutes.

We spent some time trying to target Blue Tilapia, and we saw a bunch of them, but they showed no interest in either bread or live bait.  Hai indicated they are a tough species to catch.  We also cast to some Mayan cichlids, but they weren’t hungry either.

The Oscar was high on my list, as I had never caught one before.  At the very last spot we finally spotted two of them, and I was able to catch both on live baits.  They were the strongest fish pound for pound that we caught that day.  I ended the day with around 20 fish of 4 different species. 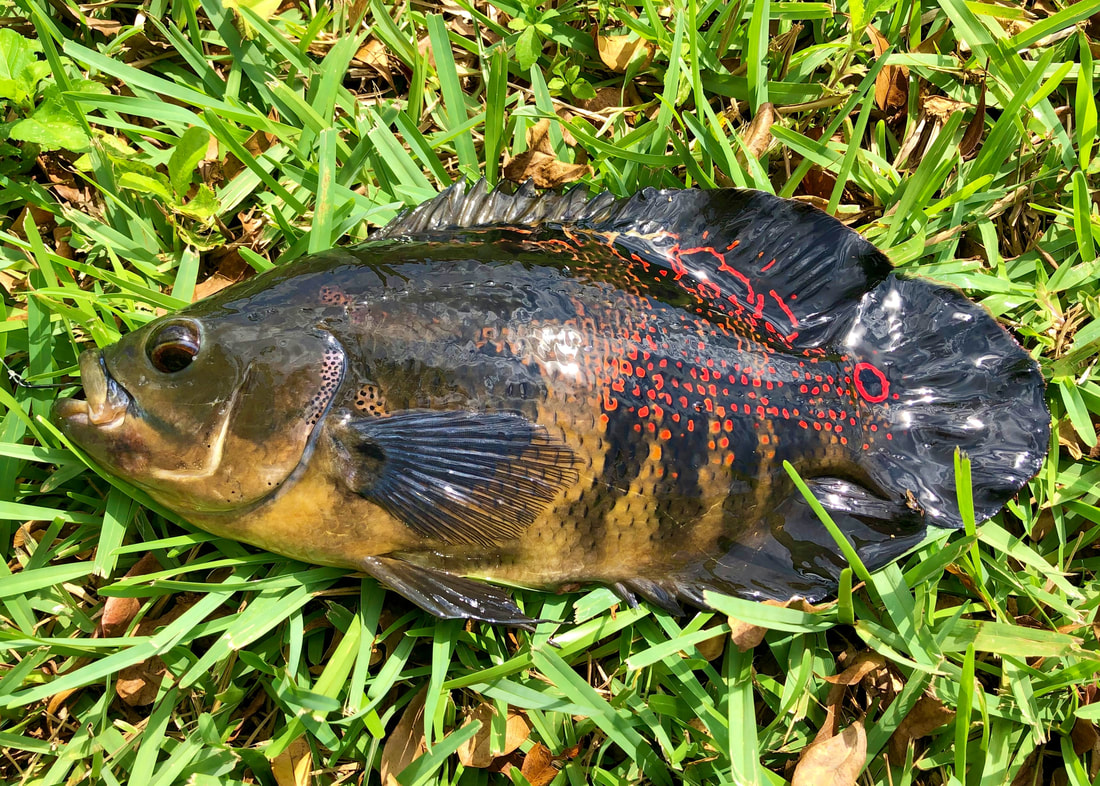 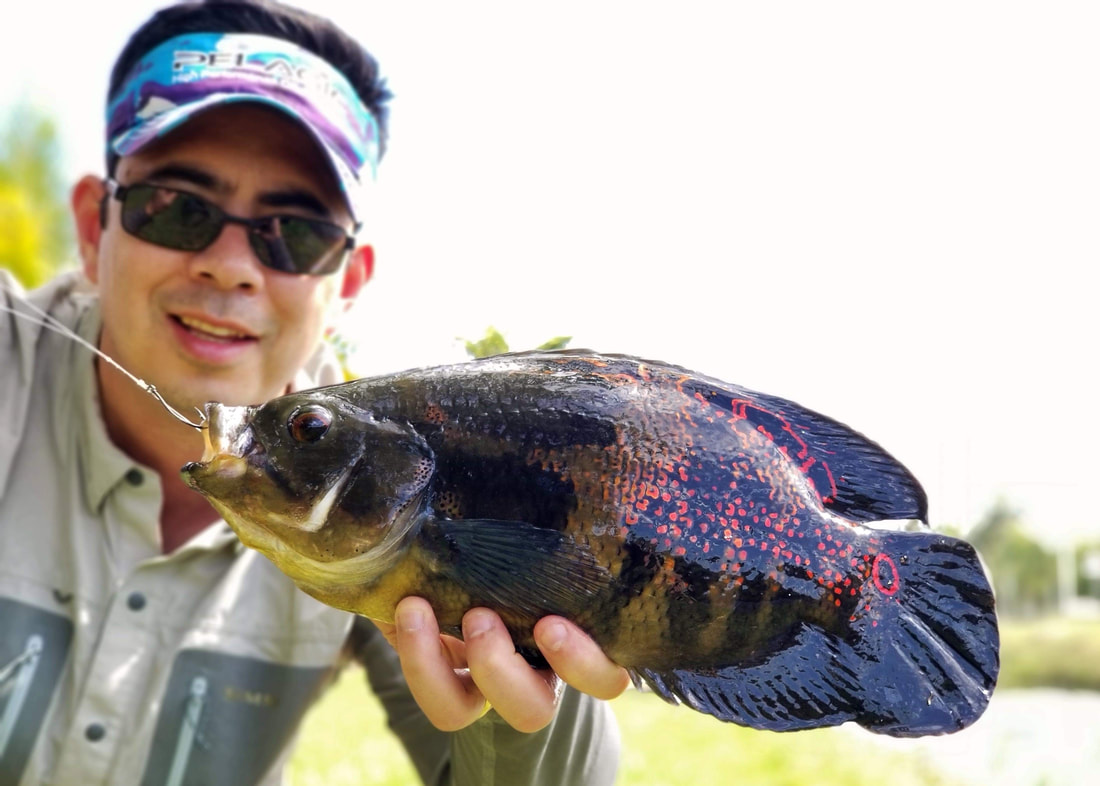 Oscar
The next day I fished Lake Ida with guide Patrick Smith of Swamp to Sea guide service.  There was only one target species on this day – Clown Knifefish.  The Clown Knifefish, or Featherback, is only found in this area of Florida and some remote parts of Asia.  I had kept one in an aquarium years ago and when I saw that they could be targeted as a gamefish I knew I had to try.  Patrick kept my expectations low by saying that one Clown Knifefish in the boat was a good day, and anything more than that was a great day.  He said he had a group come down and fish three full days for them and not get any.  He also said that fishing for them could be kind of boring since the best way to target them is to soak live baits.  However, I was ready to soak live baits all day for a shot at one of these rare and unique fish.

We started out in a shallow spot and some Clowns could be seen surfacing periodically, so that was a good sign.  The day started out with a small Largemouth Bass of about a pound and a half, followed by something bigger that broke the braid, which made me a little nervous about the state of the gear.  However, that was the only equipment failure of the day; that braid must have gotten nicked on something.  Incredibly, 10 minutes later I caught a decent sized Peacock with our line hanging out of its mouth, so we solved the mystery of what broke me off earlier.

I hooked a Clown that came near the surface and spit the hook, and I was really hoping that would not be the only chance I would get.  A little later I hooked a big fish that I was hoping might be a Clown.  It dove into the weeds and for a short but nerve-wracking amount of time I couldn’t feel it at all.  Many times when that happens the fish is able to shake free or bend the hook (we were using very small light wire hooks), but fortune was smiling upon me that day as the fish eventually decided to swim out on its own.  When it came near the boat, I could see that it was not a Clown but a very big Largemouth of around 8lbs.  I was not going to complain about bycatch like that; I hadn’t caught one that big in quite a while. 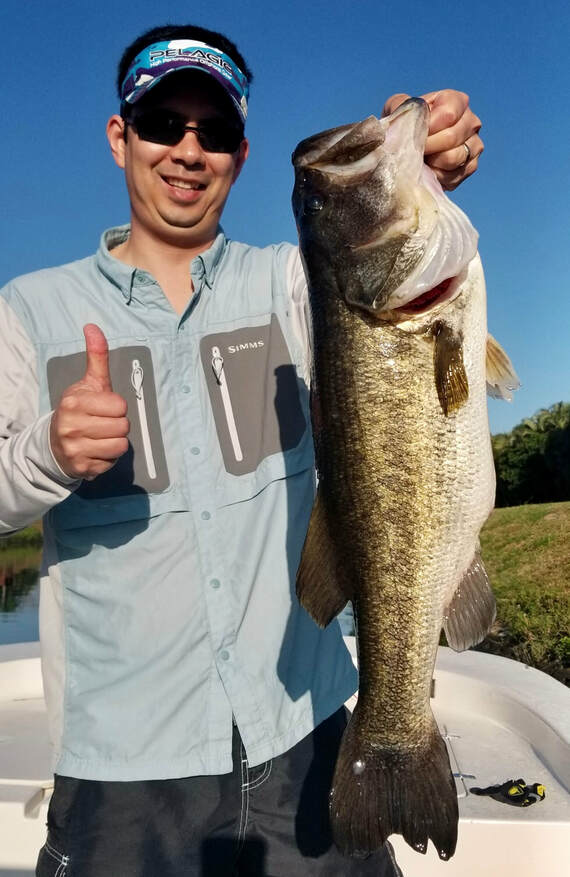 Big Lake Ida Largemouth Bass
At this point the sun was moving higher and we decided to try a deeper spot.  Fish were showing on the meter, so we dropped baits and were rewarded with the Clown bite I had been waiting for.  Patrick told me to wear the fish out so that it wouldn’t thrash around as much near the boat and throw the hook.  I played the fish for a while and eventually got it near the boat.  It took a while to land, and it made some head shakes near the boat that made me really nervous, but finally Patrick grabbed it and brought it in.

That was a great feeling to get that fish in the boat.  What a beautiful fish!  That is what I came to South Florida for.  Everything after that was going to be gravy. 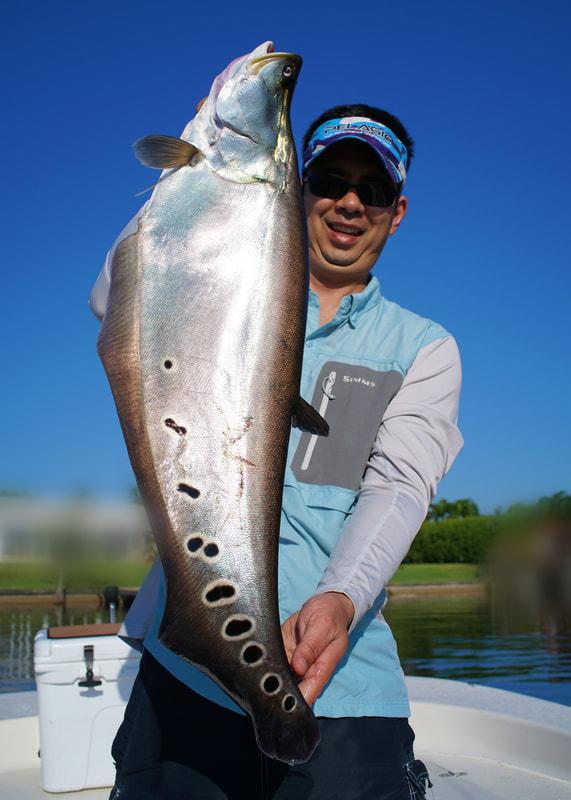 We put some baits out and caught some small hybrid striped/white bass which they call Sunshine Bass down there.  The small (under 1lb) ones didn’t put up much of a fight, but over 2lbs or so they actually fight pretty well.  Later on I hooked another smaller Clown (maybe 4lbs) which I got to the boat but which spit the hook after being leadered and held near the boat for a while.  I count that as a catch; we could have easily netted it if we wanted to.  It was held next to the boat by the leader for the more than a minute.  I would have liked a pic, but that’s ok.

We moved to another spot and saw Clowns rolling but got no bites.  We moved again just 20 yards over or so and caught another big Largemouth; this one around 6lbs.  We also got a couple of nice Peacocks there; lots of fun. 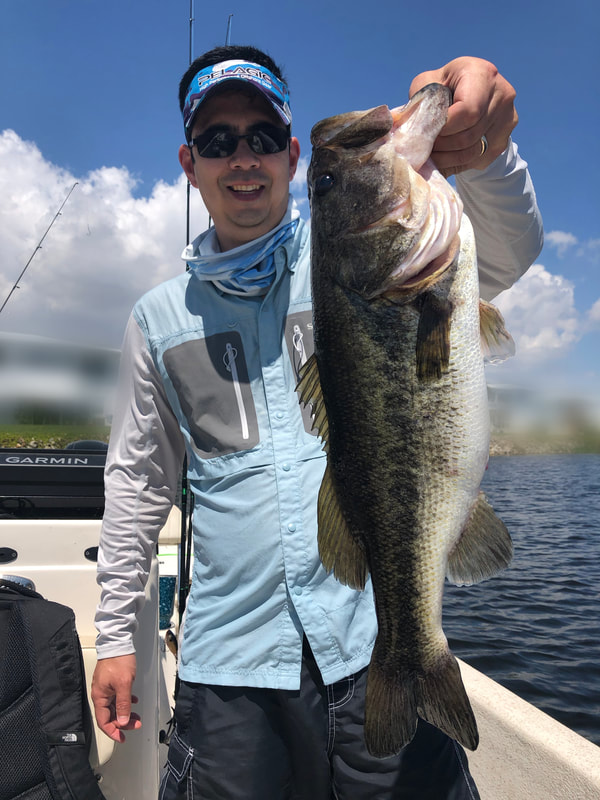 Largemouth Bass
Then came the bite I was waiting for – another big Clown!  This one put up quite a fight and felt heavier than any of the other fish that day, and indeed it was.  When it came over the side it looked to be in the 11lb range; what a fantastic fish!  I couldn’t be more stoked about the day at that point. 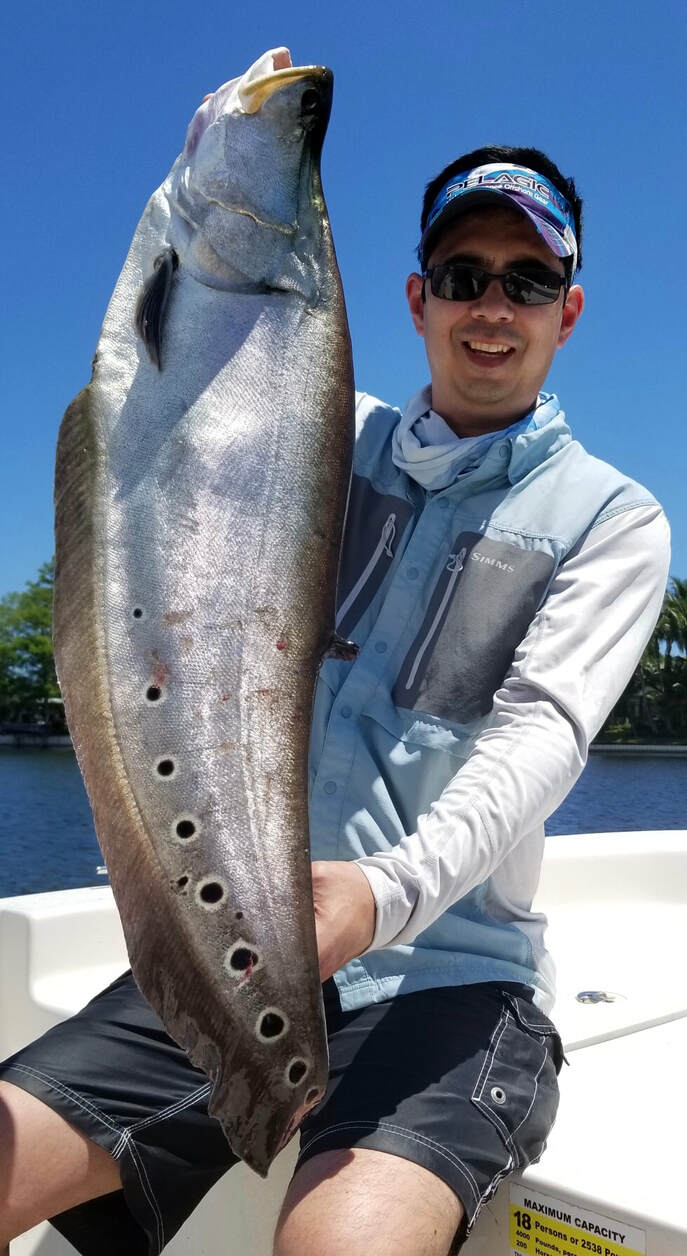 Clown Knifefish
We made a few more moves and picked up some other decent fish including a bigger Sunshine Bass and a Largemouth in the 5lb range.  Considering I was not trying to catch any, this turned out to be an excellent Largemouth day.

Finished the day with 3 Clown Knifefish, around 6 Largemouth Bass (including an 8lber, a 6lber, and a 5lber), 5 or so Peacock Bass (all decent size), and about 10 Sunshine Bass.  An outstanding day of fishing. 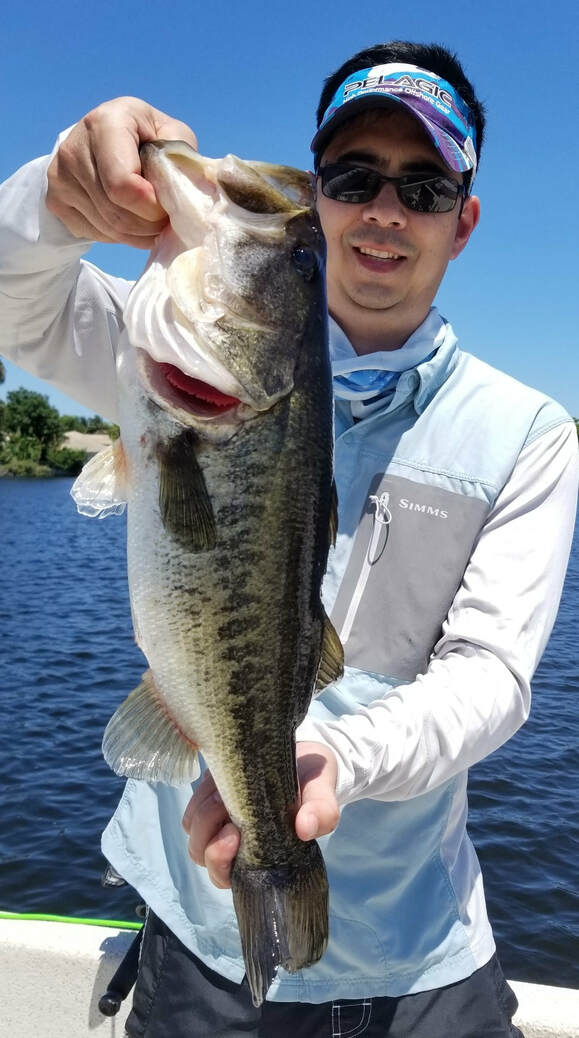 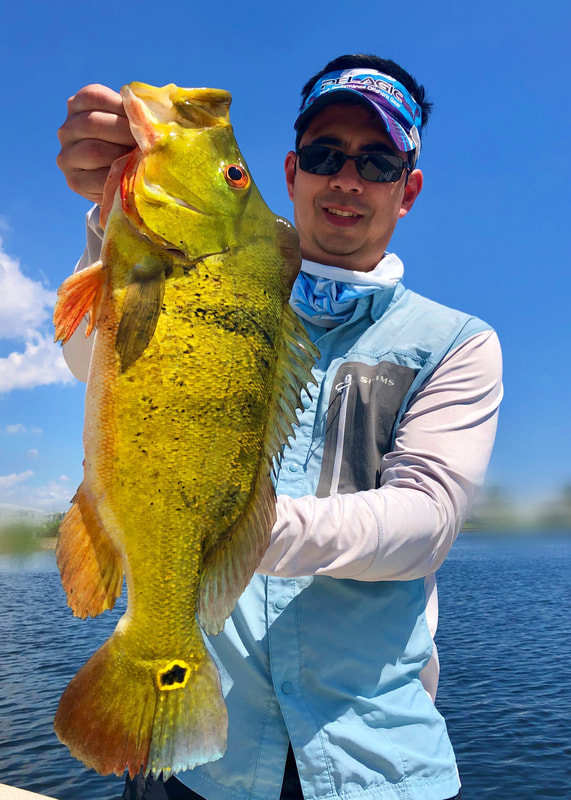 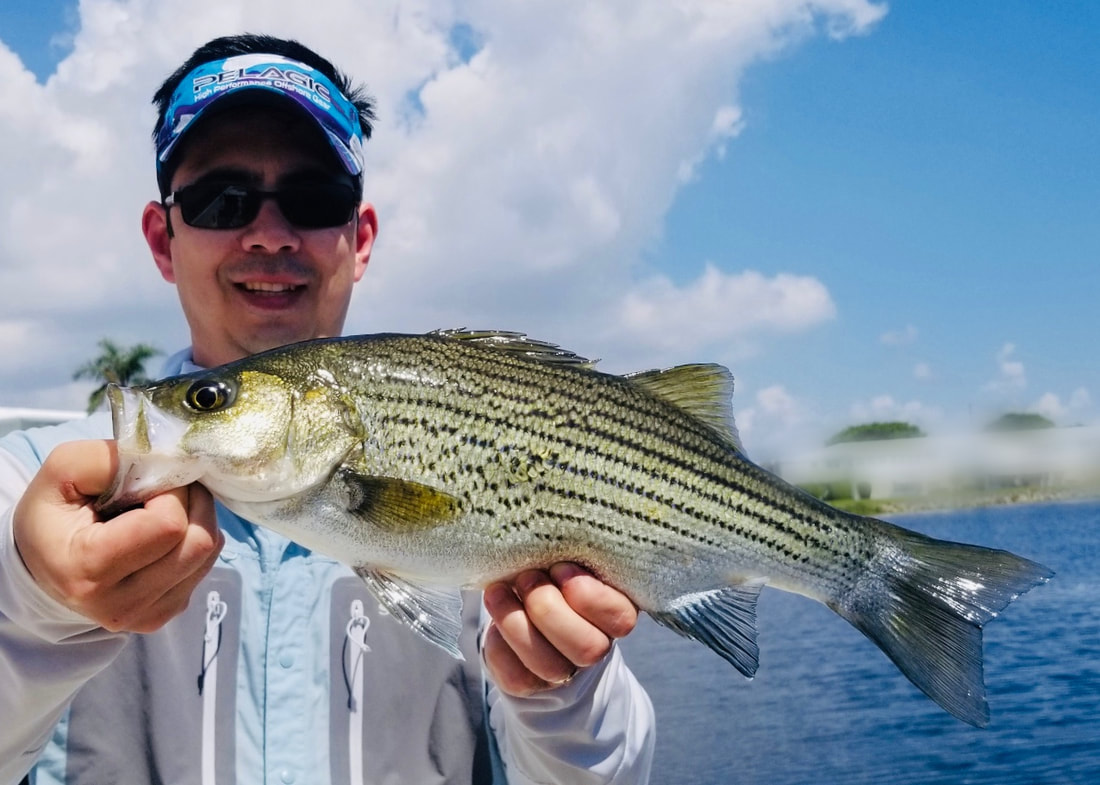 Sunshine Bass
The last day I was back with Hai in Miami trying to cross more species off the list.  After getting bait, the first fish of the day ate aggressively on the first cast.  It was a black Midas which was an extremely rare catch.  It was looking like there was going to be a lot of action, but the fishing turned out to be surprisingly tough.  We went to a lot of spots where few or no fish were spotted, and in some spots where we did see fish they were not in a biting mood. 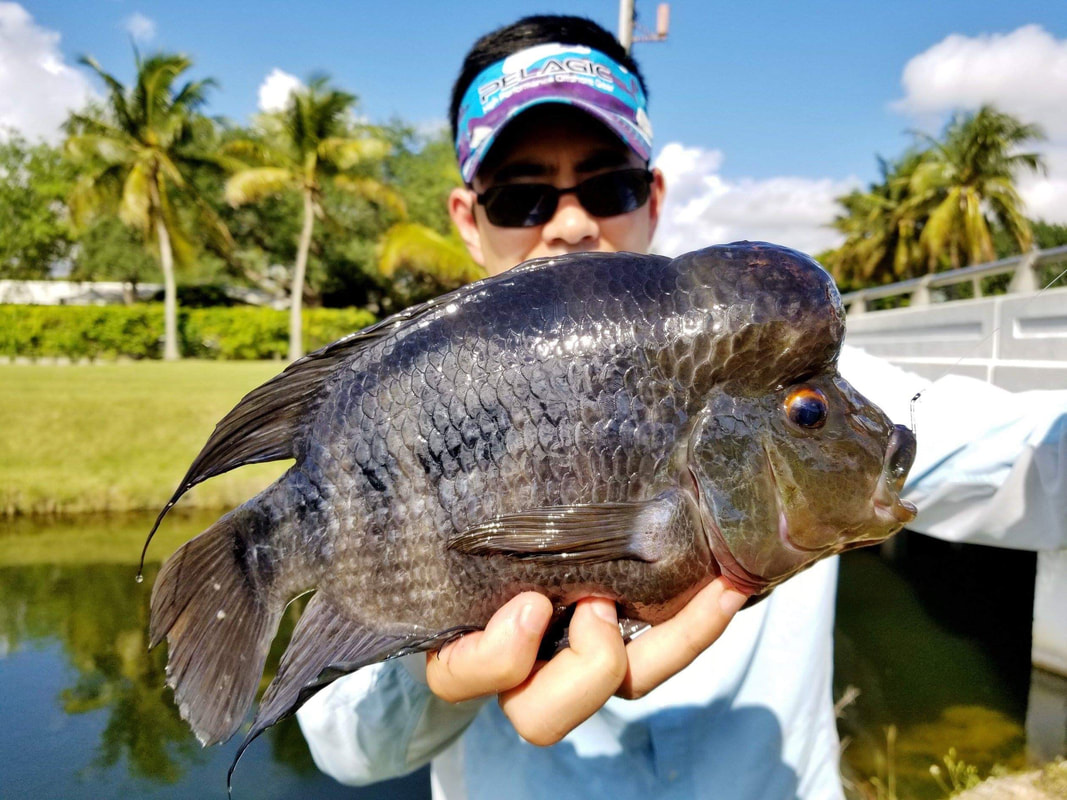 Black Midas
I did pick up some Peacocks in the city; nothing big but nice looking fish. 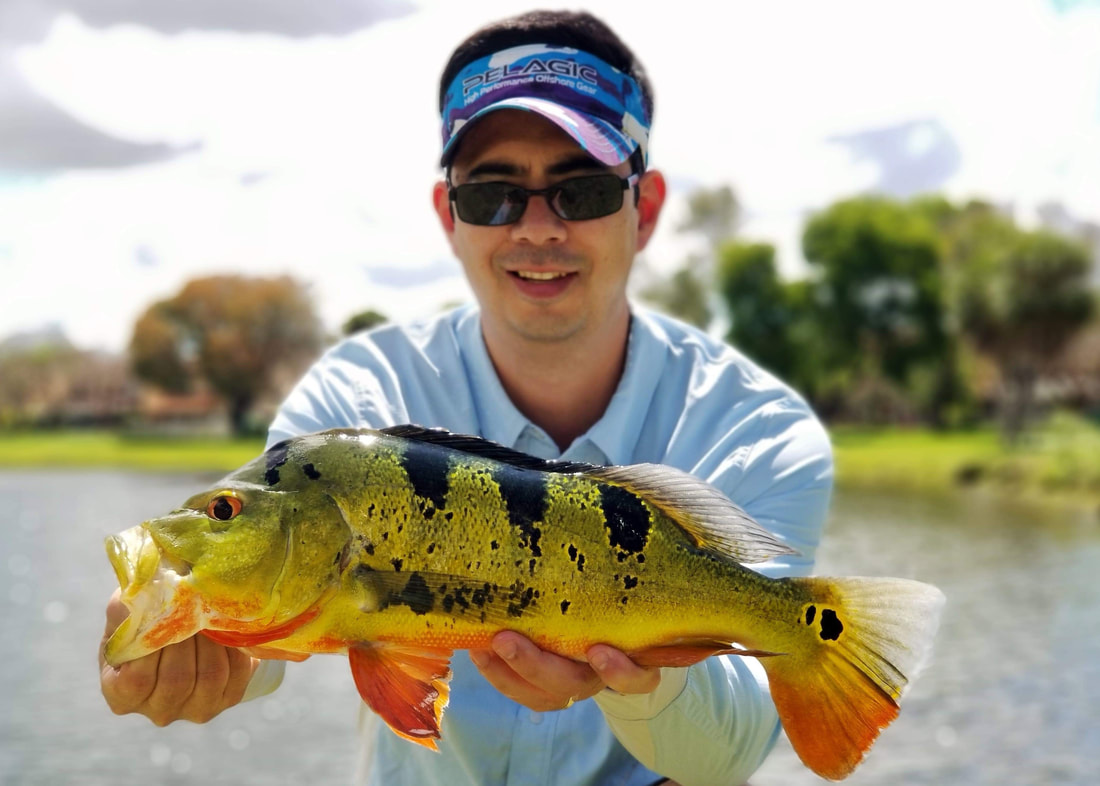 We headed out to the Everglades and I was able to catch a Mayan Cichlid (finally) and a couple smaller Oscars.  I also made some casts to a Chain Pickerel, but it showed no interest in the live bait dancing in front of its nose. 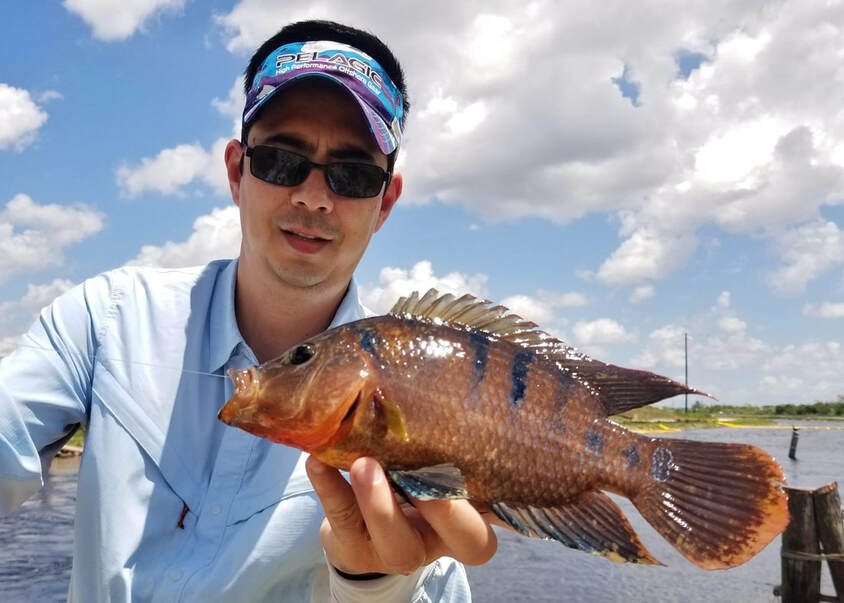 We headed back into the city and looked at a bunch of spots that we didn’t decide to fish, and finally headed to one final spot.  That spot had some Blue Tilapia that actually showed a lot of interest in biting.  Every other one we had seen during the trip did not react to live bait or bread at all (or ran away from it), but one chased my live bait very aggressively at this spot.  I switched to bread and hooked it immediately; it was a beautiful fish. 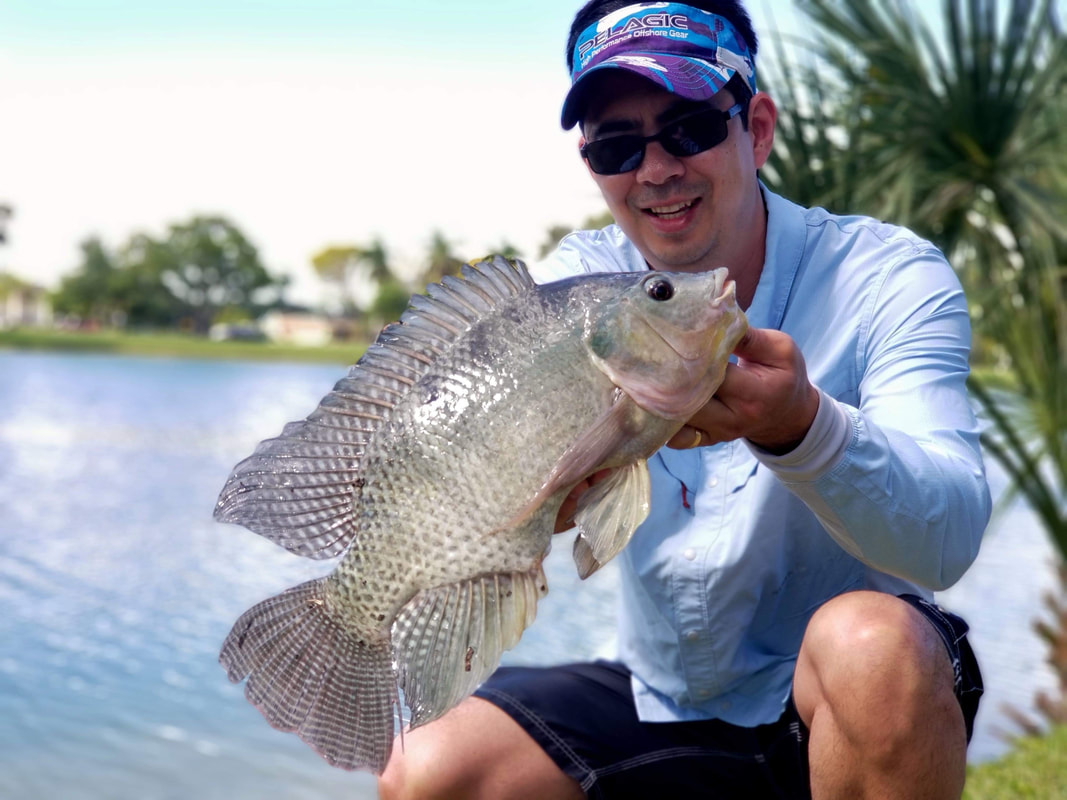 I hooked and landed a smaller Blue Tilapia, and then switched to Peacocks.  After a couple of small ones on bait, I was able to sight cast to a decent one with a jerkbait and land it.  This was the only fish I landed on a lure this whole trip.  Usually I fish lures about 90% of the time, but the fish in South Florida have a lot of food options and can be picky and I wanted to give myself the best chance at landing all these new species. 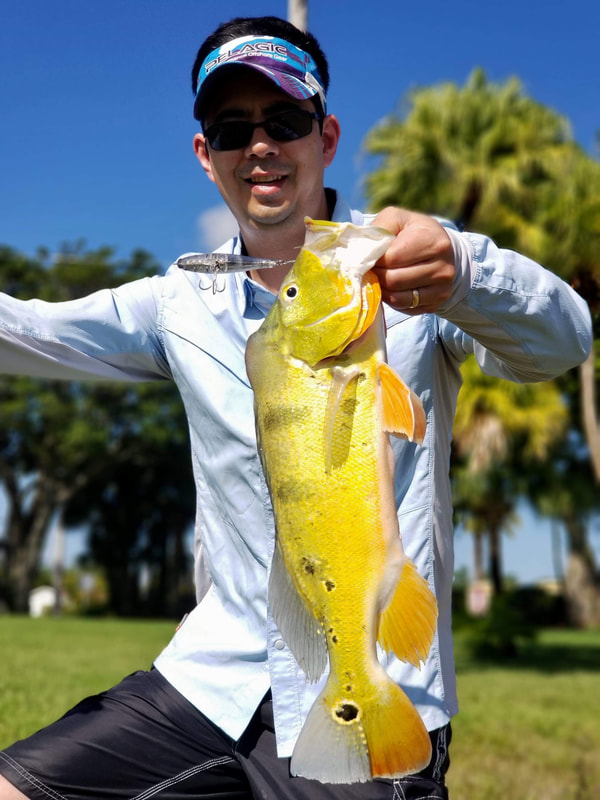 I really enjoy freshwater fishing in South Florida.  The Peacock Bass are not huge but are abundant and brilliantly colored, and there is so much water and so many different fish to target.  There is also a lot of wildlife, and on this trip I spotted many lizards (including Green Iguanas and Basilisks), several snakes (including the large one shown below; you have to watch your step anywhere with taller grass), some gators, and many different species of birds. 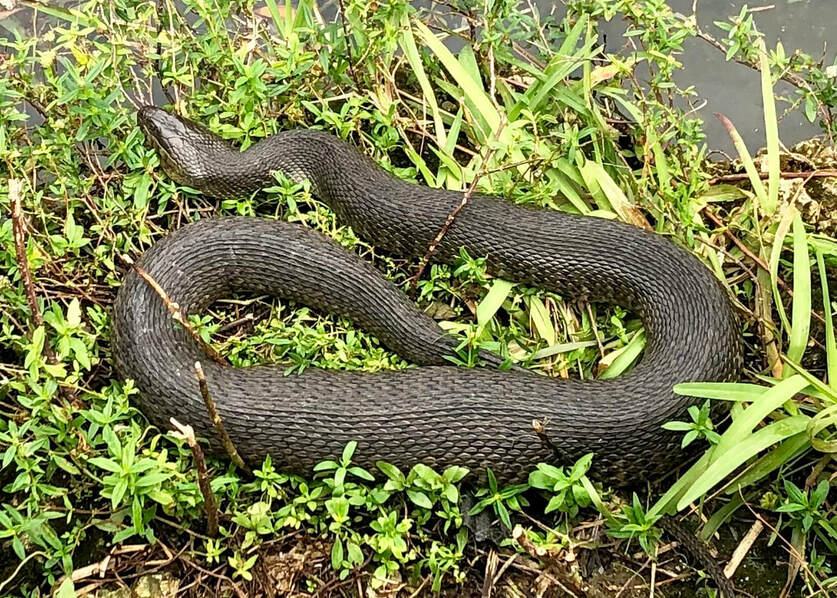 South Florida has a lot of snakes. Watch where you step.
Hai and Patrick are great guides if this is the kind of thing you might want to do.  Here is their contact info below: