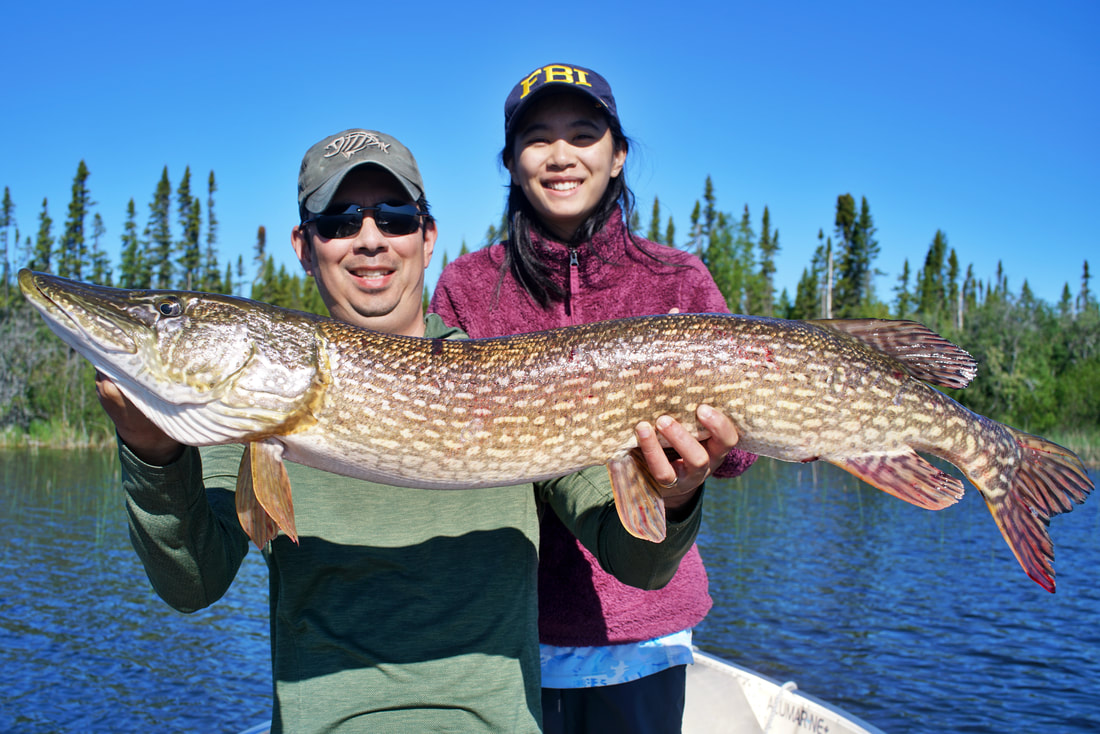 Pike are a cool looking fish that resemble a freshwater version of the Great Barracuda.  I was introduced to them when I lived in the Midwest for a few years a while ago and I’m sad we don’t have them here in Southern California.  Pike are voracious toothy predators that routinely try to consume prey half their own size and larger.  I have seen pictures of a 3” baby pike eating a 2.5” baby pike.  Apparently they are hard to raise commercially because if you fill a pond full of pike fry you generally end up with just one huge pike.

Pike are much, much easier to catch than their elusive cousin, the Muskie.  Frankly I never understood why people like to cast for days on end to try to catch one or two Muskie when they could be loading the boat with Pike.  The two fish look very similar and although the average Muskie is bigger there is not that huge of a size difference.

Pike are generally referred to in terms of length, with anything over 35” being a large fish.  Pike under 30” tend to be skinny and kind of a nuisance to catch, but around 30” they start to put on some girth and become a more substantial fish.  A 32” fish will weigh significantly more than a 27” fish.

Pike are not highly sought after as a food fish, but small fish in northern waters (north of the United States) can actually taste quite good.  However, they are not easy to fillet as they have a number of pesky Y bones that are hard to remove. 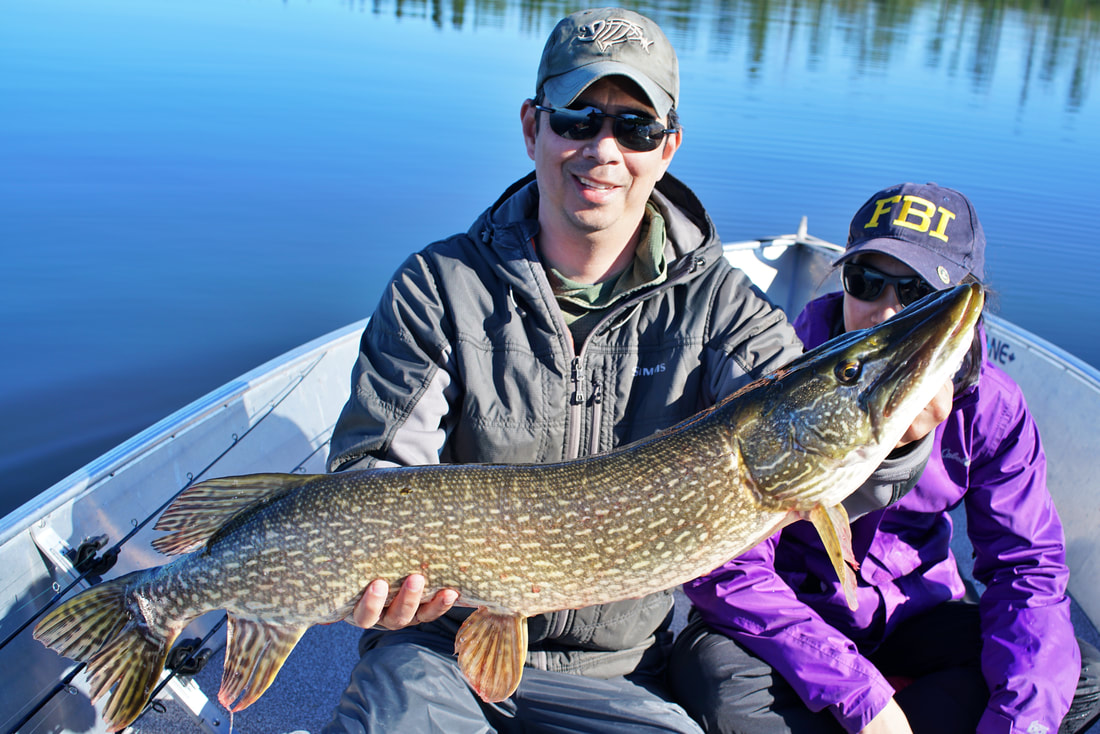 Pike are not particularly strong.  They do make some ferocious initial strikes, but the fight usually does not last long.  The biggest worry is getting cut off by their teeth.  They also do a lot of twisting and spinning around trying to dislodge the hook.  They occasionally jump.

Pike do not put up that great of a fight and with some skill I’m sure you could land almost any size Pike on 6lb line.  I tend to use 12-15lb line depending on where I'm fishing with a thin wire leader for their teeth.  They are not very line shy.  For baitcasting the Daiwa Steez is an ideal reel, while if you want to use spinning gear the Daiwa Certate is the best in class.  Click here for tackle recommendations. 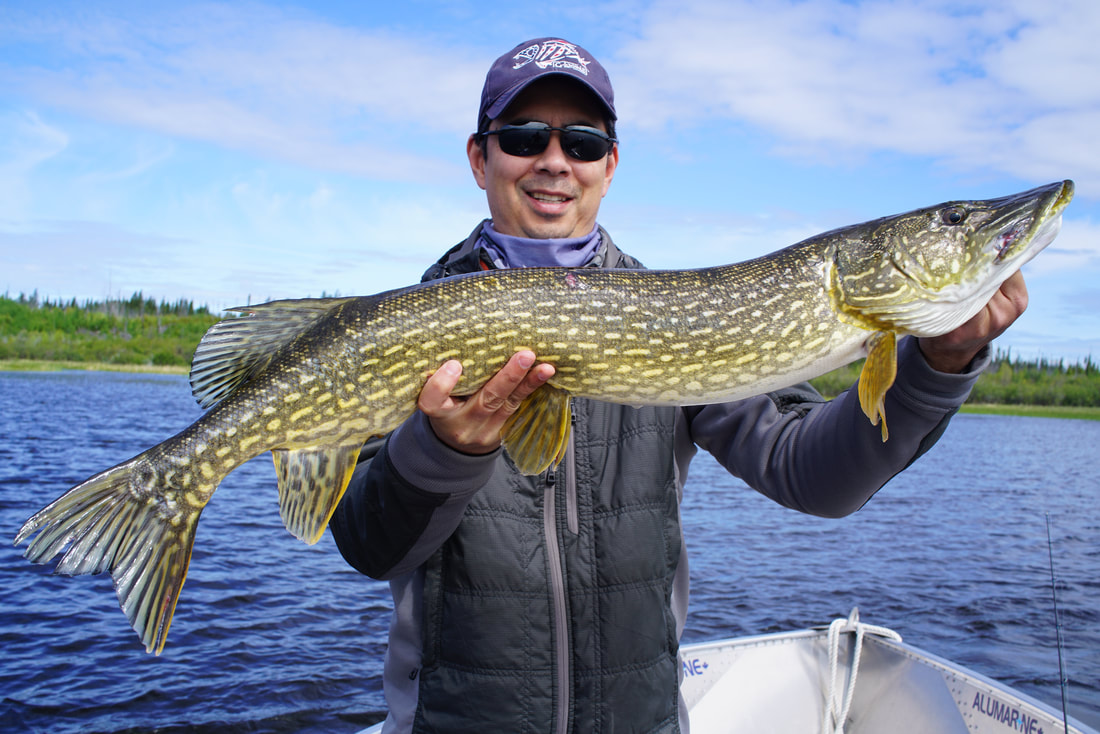 A brightly colored Pike caught on a spinner in Manitoba, Canada
Pike Techniques

Pike are caught on lures, live bait, and dead bait.  They are ambush predators that tend to just hang out until some food swims by.  Many larger Pike are caught on bait, especially in heavily fished areas.  Right after winter they tend to be in shallow water where it is warmer.  In the summer when weed beds grow, they are often found in those.  They also like hanging around rocks and other ambush points.

Lots of lures work for Pike.  When they are feeding, you can throw almost anything at them.  Many of my lure-caught Pike have been caught on 6” Storm swimbaits that look like baby pike.  Daredevil and Mepps Cyclops spoons and large Mepps spinners are popular.

When you can see Pike in the shallows a plastic like a Gulp Jerkshad fished weightless is a good option.  They also work well on a lead jighead when the fish are deeper. 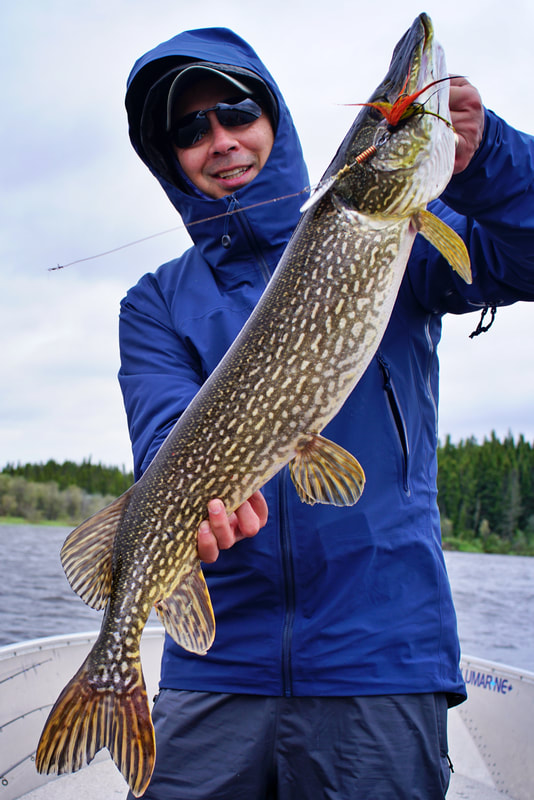 Fish such as live suckers are good bait for Pike.  You can use relatively large baits because Pike are not shy about engulfing things over half their own length.  It’s usually a good idea to use a stinger treble in back of a big bait as Pike often grab fish in the middle.  If you use a stinger hook you should set the hook right away; if using a single hook let the fish eat the bait longer.

Where to get the big Pike

Northern fisheries from Wisconsin up into Canada hold some big pike.  There are supposed to be some big ones in Europe as well but they are pretty heavily pressured.  For my money, Canada is the best place for size and numbers.

The above barely scratches the surface on how to catch Pike.  The resources below will provide a wealth of information:

Pike: An In-Fisherman Handbook of Strategies is an excellent resource and has everything you need to know.

www.wibigfish.com  This guy will put you on the fish if you are in Wisconsin.

This is a nice lodge in Canada that offers good Pike fishing:  www.godslake.ca 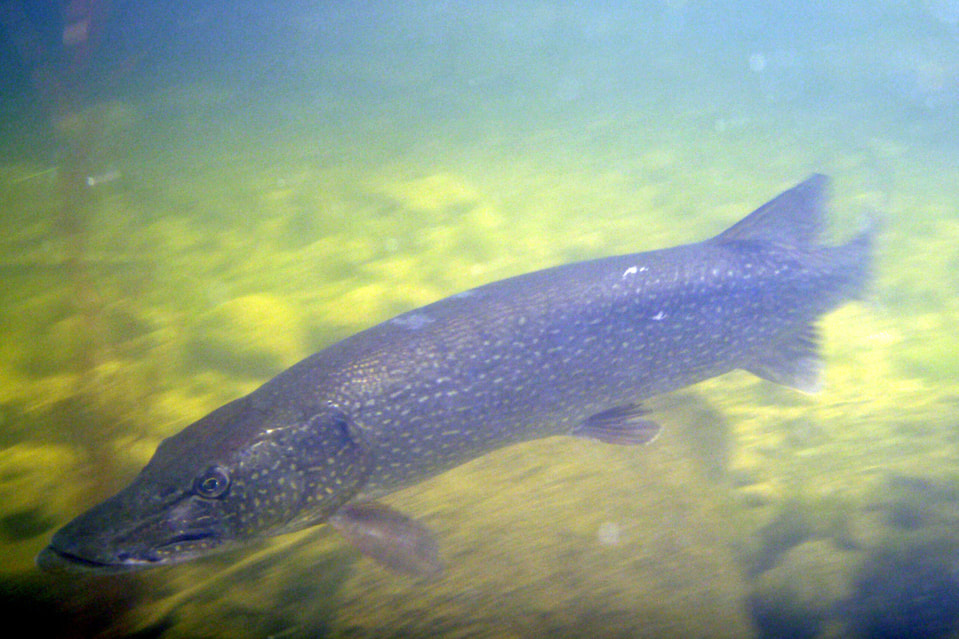 A pike swims off in a lake in Ontario, Canada. It was hanging out under a dock and let me take a picture but wouldn't eat. 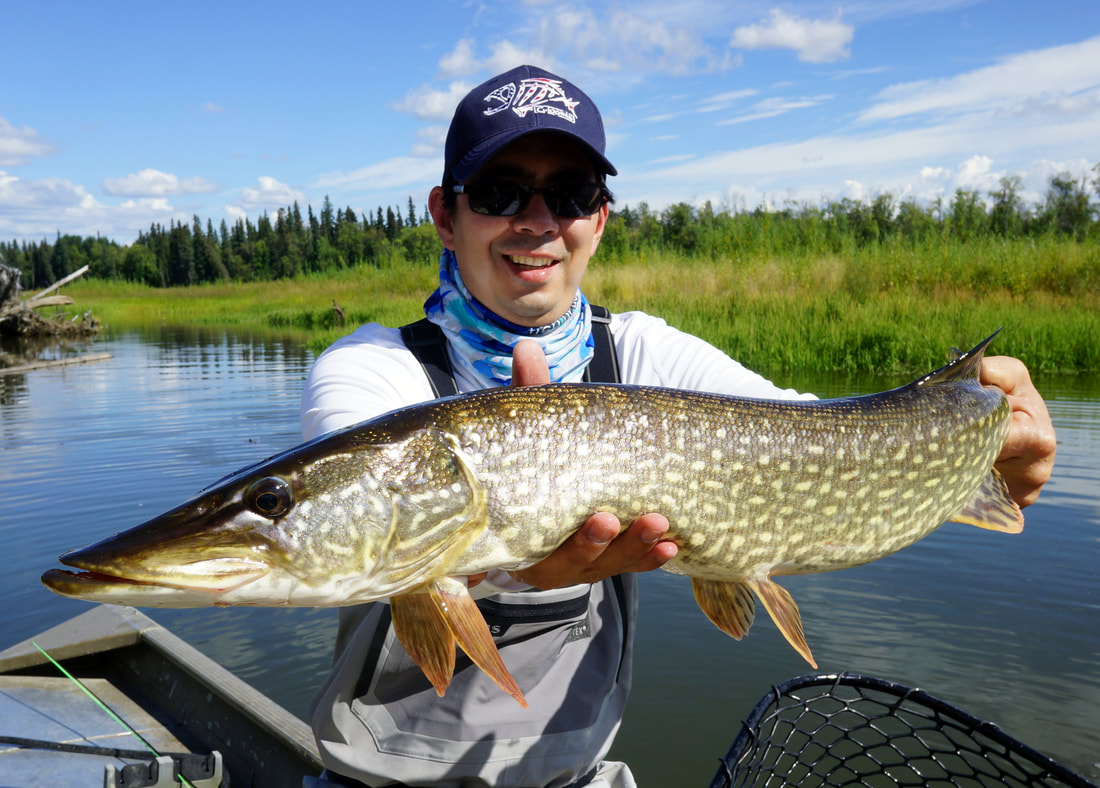 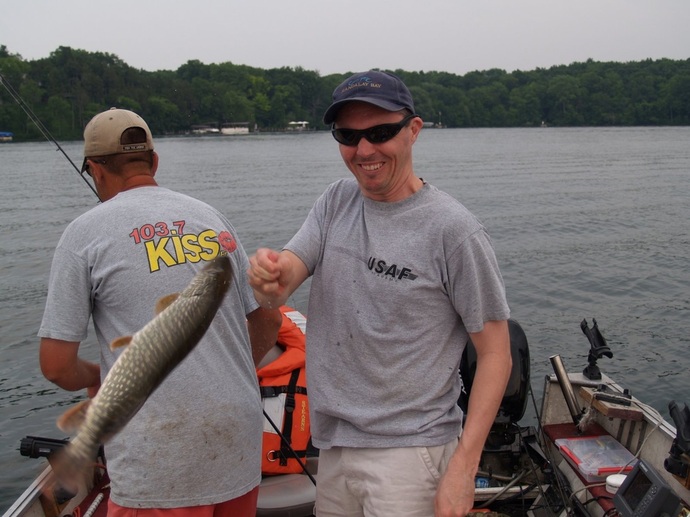 My friend Rob demonstrating how to properly grasp a Pike in Pine Lake, Wisconsin 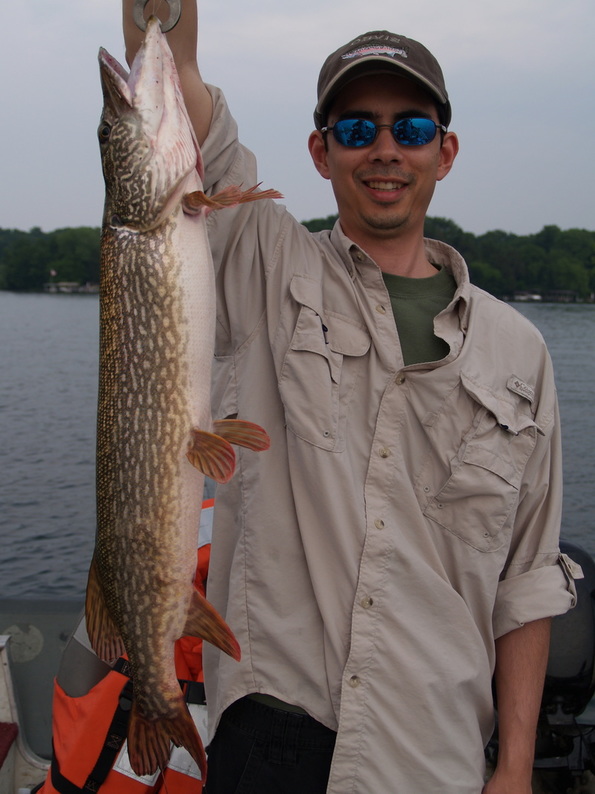 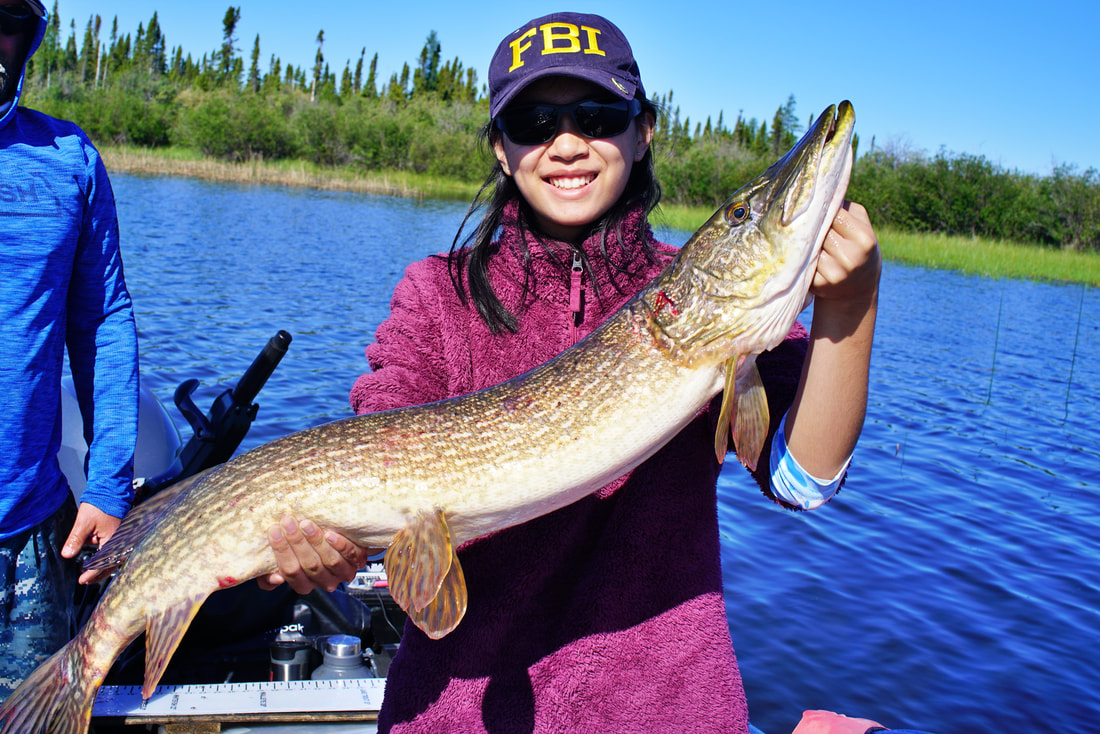 The author's daughter with a beauty caught in Canada