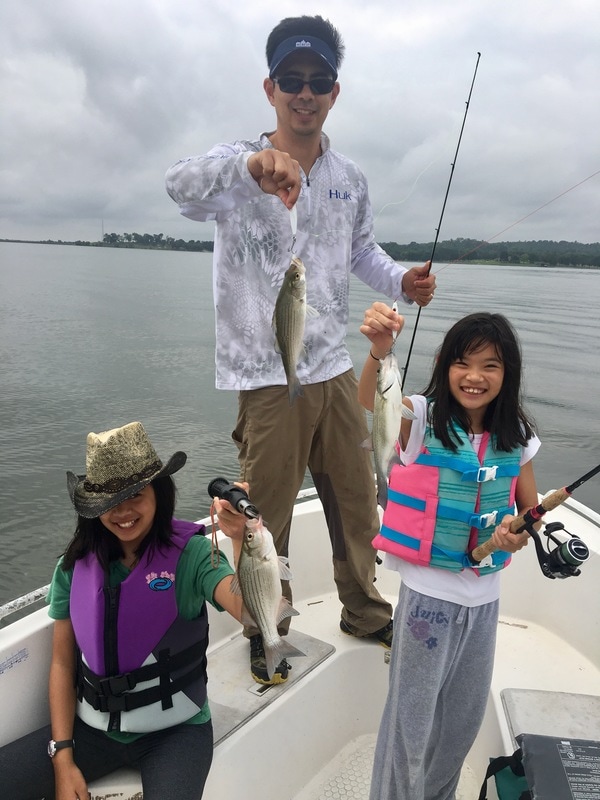 Three casts, and three fish. That's how White Bass fishing can be when you find a feeding school. Here the author and his daughters show some average-sized White Bass
White Bass
Morone chrysops
HOME
Other Species

White Bass, also known as silver bass or sand bass, are a scrappy little gamefish found throughout the United States, particularly in the Midwest and the South.  They are the state fish of Oklahoma.  As can be seen from their appearance, they are related to Striped Bass and often mistaken for them.  White Bass are a schooling fish that can be relatively easy to catch when located.  They are aggressive and can be caught on a variety of different lures when feeding.

White Bass are a relatively fast growing fish, at times living up to 10 years.  They are prolific spawners, with females able to release up to a million eggs at a time.  Spawning occurs in the spring, when the water hits 55-60 degrees or so.  When this occurs, the fish leave larger lakes to move up into creeks to spawn.  The smaller males go first, followed shortly by the larger females.

Juvenile White Bass feed on small aquatic insects and invertebrates, while larger ones feed on baitfish such as threadfin shad.  White Bass average about a pound, with anything over 3lbs being a trophy.  They are popular to eat and relatively easy to clean.

White Bass pull decently for their size, but they don't have much size.  They also don't have a lot of tricks up their sleeves; they aren't going to wrap you up in cover or jump and throw the hook.  If you hook one, you are going to land it nearly every time.

Given that they are a relatively small gamefish primarily found in open water, White Bass can be targeted with light tackle in the 6-10lb range.  Spinning or baitcasting tackle can work depending on preference.  Click here for tackle recommendations.

The key to catching White Bass is finding them.  In the spring, when they are concentrated in smaller creeks for spawning, this can be relatively easy.  The rest of the year, they are more spread out in larger bodies of water.  To locate a school, you can look for surface activity such as boils or diving birds and head over there (without running over them with your boat).  Good electronics are needed to consistently find them in big bodies of water.  Look for them near schools of shad.  They are often right on the bottom below the bait.  Similar to Striped Bass, they only feed on things above them or at their level, so make your presentation at the level they are at.

White Bass get excited when they hear splashing, so sometimes it helps to keep a hooked fish in the water for a little while.

White Bass will hit a variety of lures, most of which resemble shad.  White and clear shades are good most of the time, with chartreuse being popular when visibility is low.  Two popular lures are shown below - the "slab" type lure, which can be jigged or cast and retrieved, and the plastic grub on a jig head.  Spinners and crankbaits will also work well.  White Bass are not particularly choosy; you just have to find a feeding school and put something in front of them that looks like a shad.

White Bass can be caught by trolling, which is effective for finding the schools but not particularly sporty since the fish only average a pound or so.  Also, it's harder to really load the boat with them when you are trolling, unlike when you anchor near a hungry school.  It is much more fun to cast to them or drop down and jig for them once they are located. 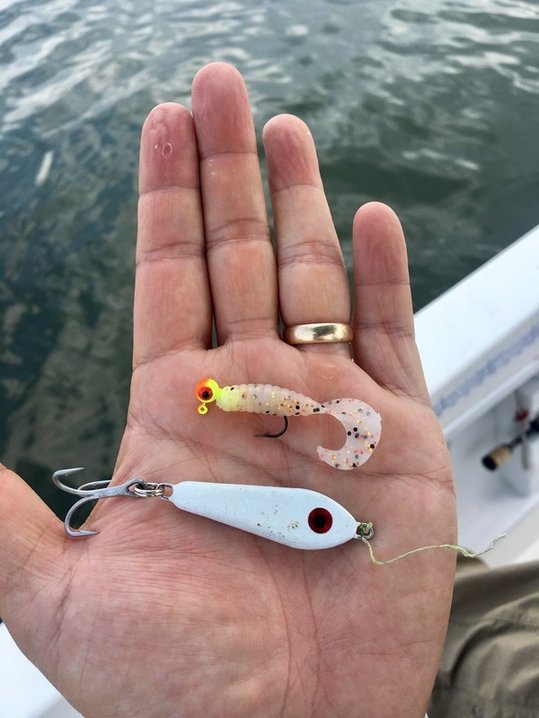 Live shad work well if you can keep them alive.  White Bass will also eat worms.

Where To Get the Big White Bass

Devil's Lake in North Dakota has some huge ones, which can be caught conventionally and ice fishing. 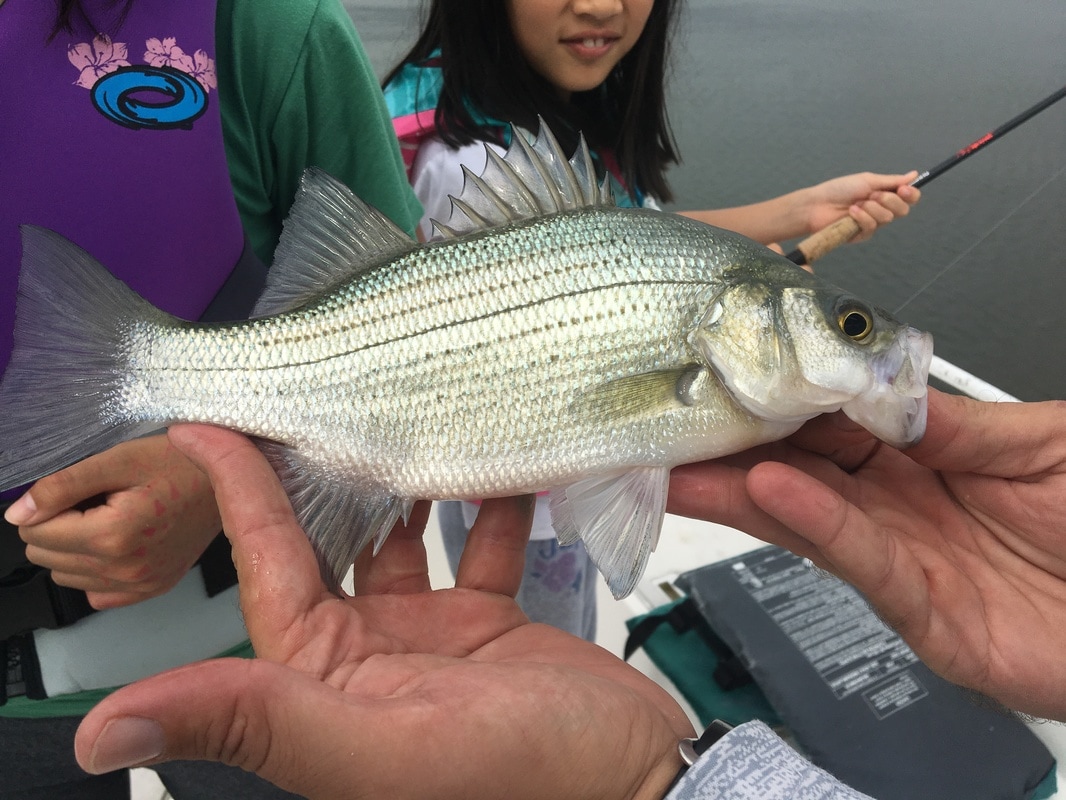 The White Bass is a handsome fish 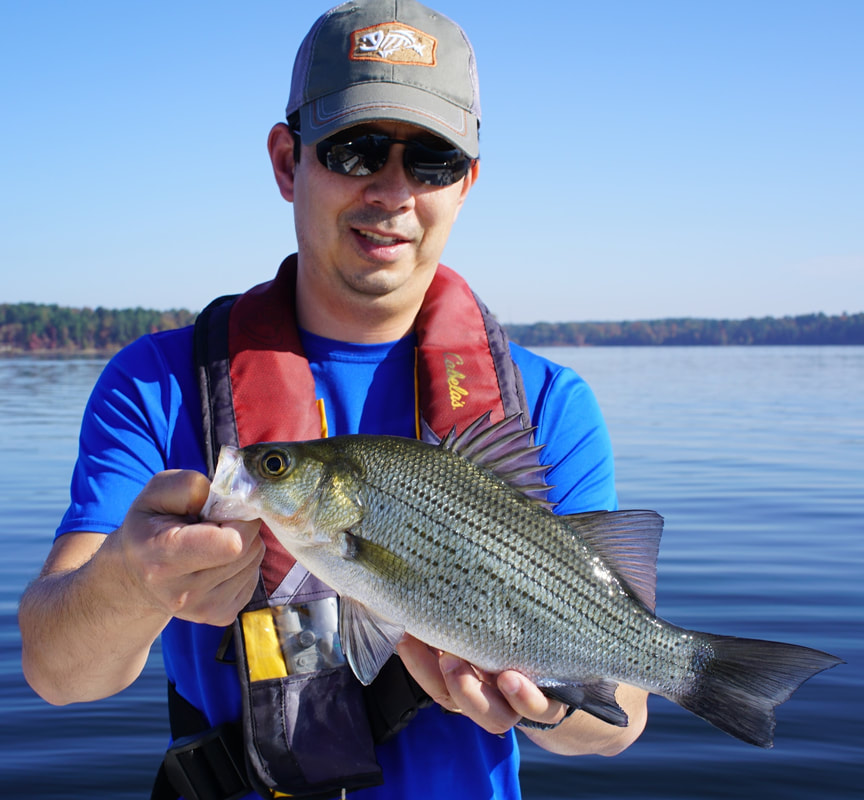 A solid White Bass from Lake O the Pines Texas 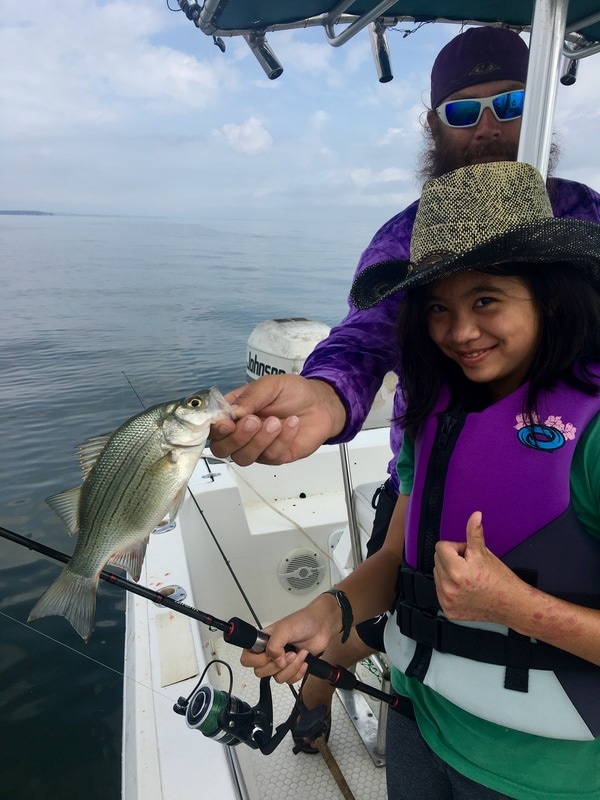 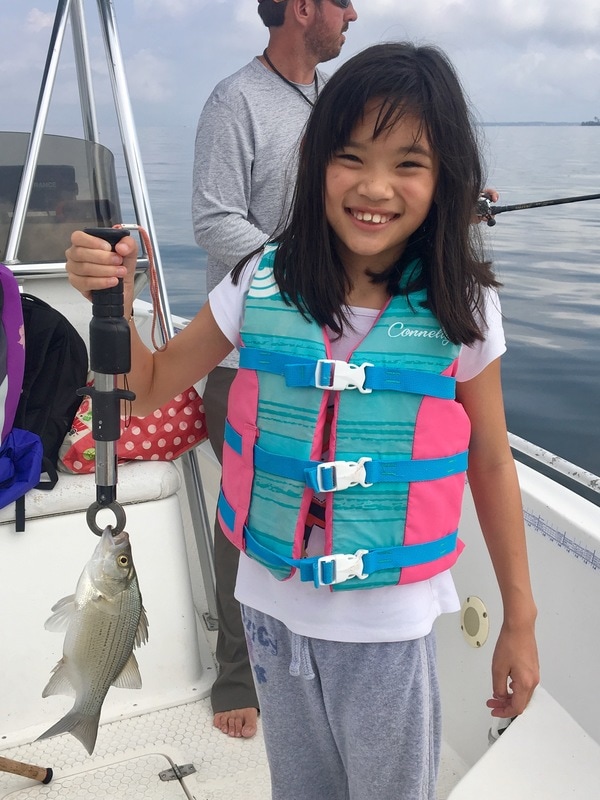