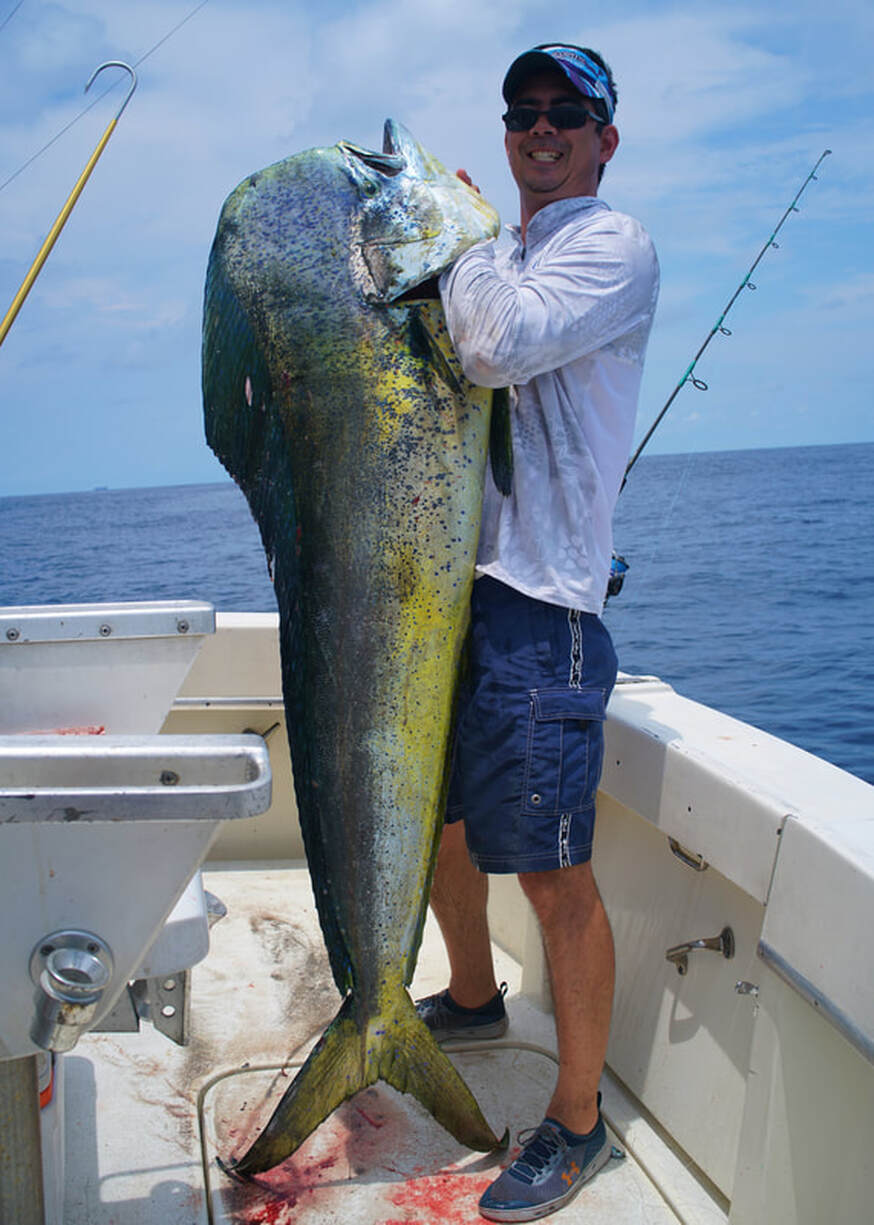 The author's largest Dorado ever, caught while jigging for bait offshore from Puerto Jimenez, Costa Rica on a medium spinning rod.
Dorado

Dorado (or mahi-mahi as they are called some places or dolphin fish as they are called in other places) are one of the world’s most popular gamefish, and it’s no mystery why that is.  They are spectacularly colored, fight hard and jump when hooked, and taste delicious.  They are abundant in most tropical locales and because they are a fast-growing, short-lived fish they are hungry more often than not.  They die of old age around 5-6 years and attain a maximum weight of around 90lbs.

Words and pictures cannot adequately describe the beauty of a fully lit up Dorado in the water.  I have seen thousands of pictures of Dorado and I can’t remember one that looked as good as the real thing.  They can change the intensity of their colors based on their mood and unfortunately their color usually fades almost immediately after they are brought on board a boat.  By the time they get back to the dock they are usually a dull gray color and you would have a hard time convincing anyone that they are one of the most strikingly colored fish in the ocean.  One of my fishing goals in life to get a picture that truly captures their beauty.  The ones in the gallery below are as close as I've gotten so far.

Males, often called “Bulls”, have a large distinctive flat forehead.  They grow bigger than the females, which are called “Cows”.  Most fish over 25lbs or so will be male.

Dorado are very good to eat as their frequent presence on restaurant menus suggests (usually called Mahi-Mahi in the US).  As a kid, they were one of the few fish species of fish that I would eat.

Check out this short video of awesome action on Dorado, Marlin, and Tuna in Puerto Vallarta:  http://www.youtube.com/watch?v=DXAbGeWEoWo

Dorado have a lot of muscle in their relatively slender bodies and put up an acrobatic and strong fight, especially when hooked on tackle that is appropriate for their size.  The fish pictured above was hooked on medium spinning tackle and put up a tremendous fight.

Dorado have a high yield of meat relative to their size and it tastes very good prepared a number of different ways.  I have never heard of anyone eating them raw for some reason, but they have a nice white meat that doesn't taste fishy.  It was one of the few fish I was ok with eating when I was a kid.

Any medium weight conventional set up should work fine.  A Shimano Trinidad 16N is a good reel for casting.  Unfortunately, Dorado are often hooked when trolling with heavy tackle meant for larger fish such as Marlin and so they are totally outmatched and really don't get a chance to show what they are made of.  This is one of the great tragedies of sportfishing.  If you hook a 30lb+ Dorado on a lighter saltwater baitcasting rod and reel you are in for quite a fight.

If you got any useful info on this site, please consider clicking on the links below to buy a rod or reel.  Also, Dorado live in hot places so make sure you take the sun seriously and stay cool with the type of clothing shown below: 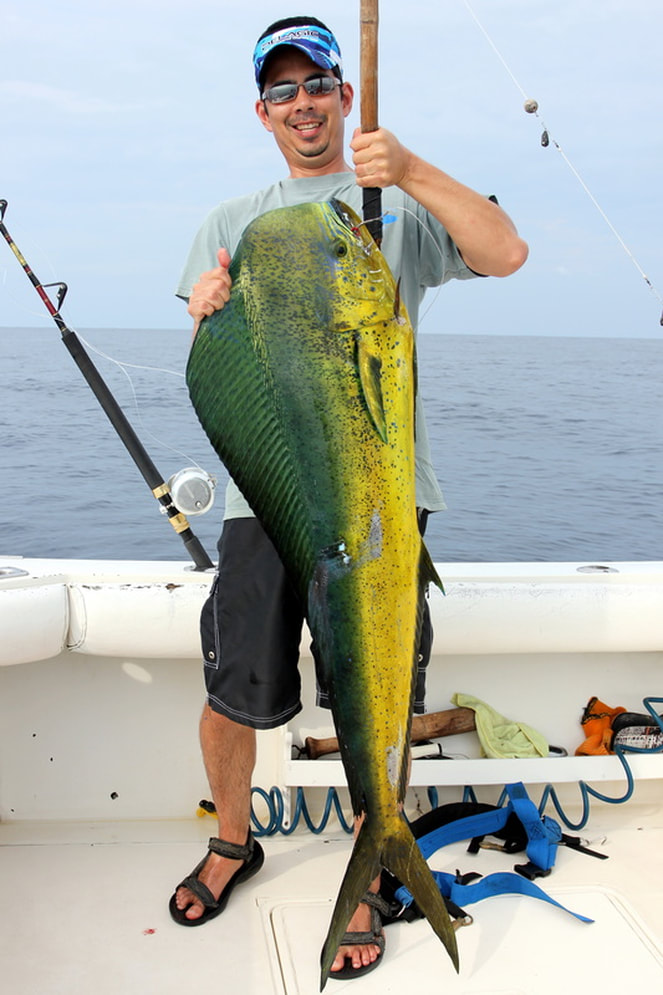 Dorado are an open water species that often associates with floating debris such as logs.  If you are in an area with Dorado any floating object is worth a look as it may concentrate the fish.  If you have anything to chum with, that can really get them going.  They are considered a pelagic fish but I have seen them caught from shore on rare occasions.

Most Dorado are caught on trolling lures such as rubber skirts meant for Marlin or Sailfish or feathers meant for Tuna.  They also hit trolled plugs such as Rapalas.  It's amazing how large of a lure they will eat; they are a greedy fish.

If Dorado are concentrated in an area, either through chumming or because there is a piece of floating debris, a wide variety of lures may be cast to them.  My favorite is a popper, which they will readily eat.  If they are fired up they will pretty much eat anything.  Whatever you cast to them, make sure you watch out with heavier lures as Dorado jump wildly when hooked and the lure could come flying back at you at a high rate of speed.

Click on the links below to purchase some good Dorado lures:
Dorado Baits

Dorado mostly eat fish so traditional baitfish such as sardines and Pacific Mackerel work well.  Larger fish will eat larger baits.  Dorado have relatively small mouths but it always amazes me how they can somehow still engulf relatively large baits.  When they are fired up they will eat almost anything, alive or dead.

Where to get the big Dorado

Any tropical location where there is good fishing for other pelagics such as Marlin or Wahoo should have some Dorado.  Some world-record fish have been caught in the Cabo San Lucas area so that would be a good bet.  After rain flushes debris in the water is a good time to go Dorado hunting as the debris will concentrate them.

The above barely scratches the surface on how to catch Dorado.  The resources below will provide a wealth of information:

If you are in Puerto Vallarta, these guys will find the Dorado for you:

This is a good spot in Baja:  www.rancholeonero.com
Below is an example of how Dorado change color; these two photos are of the same fish taken within minutes of each other in Costa Rica: 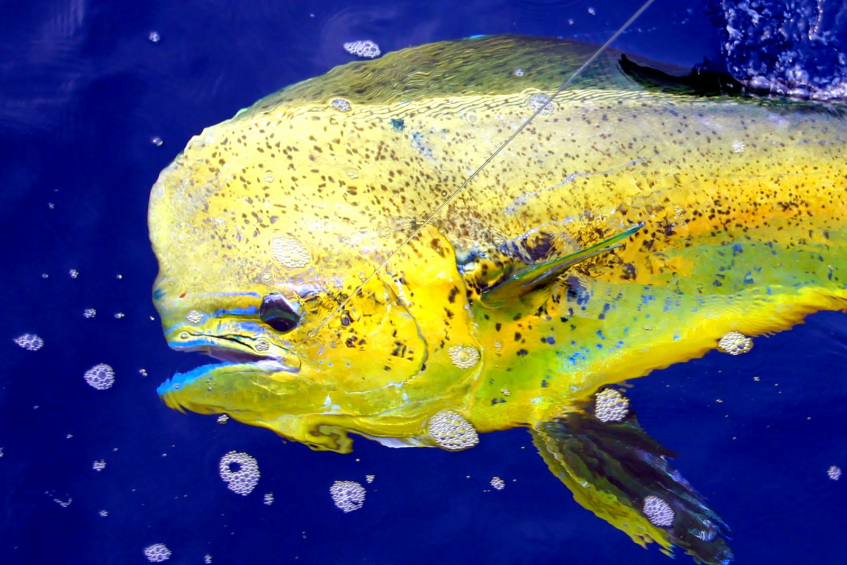 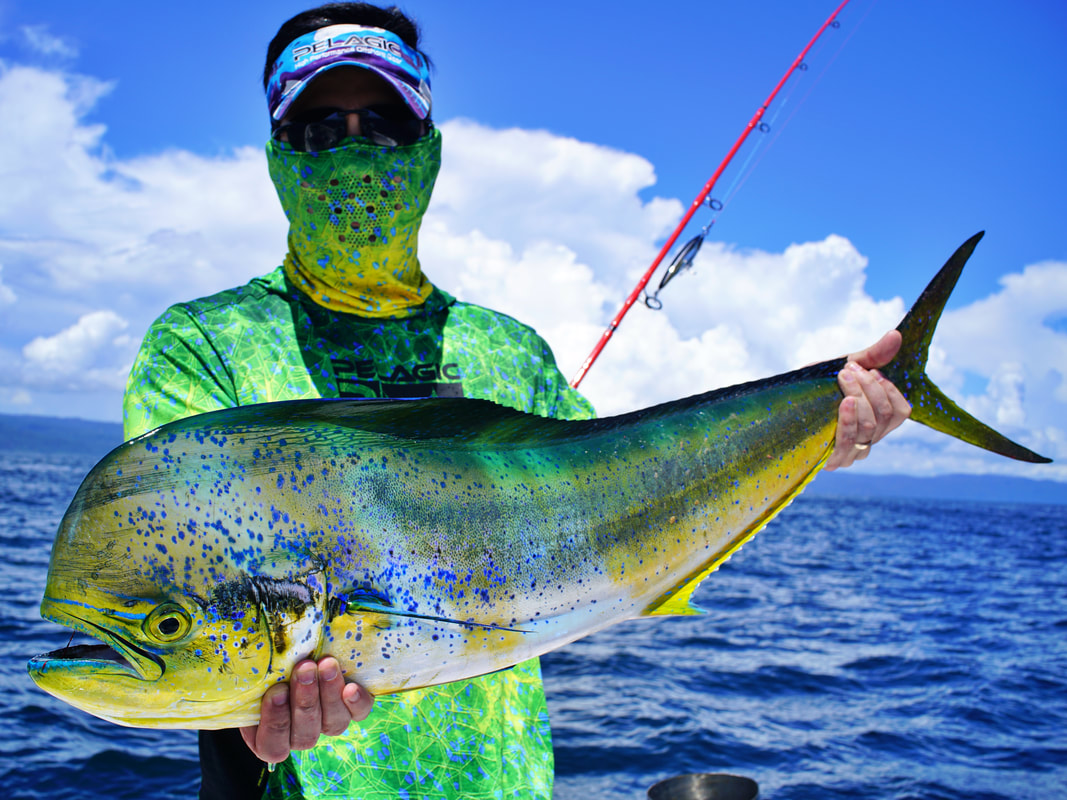 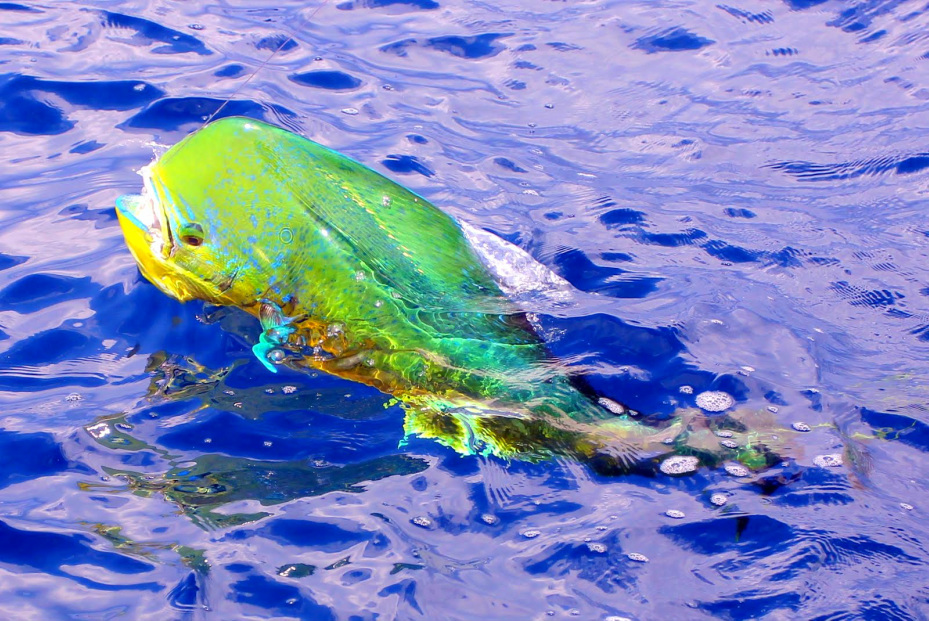 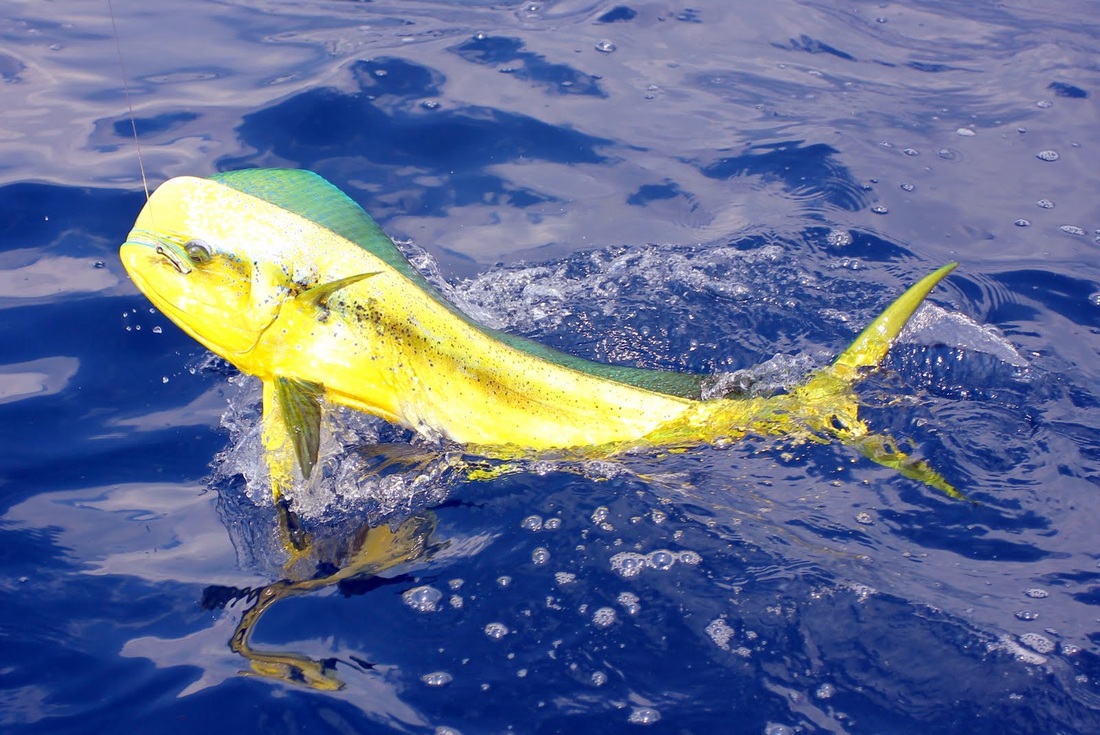 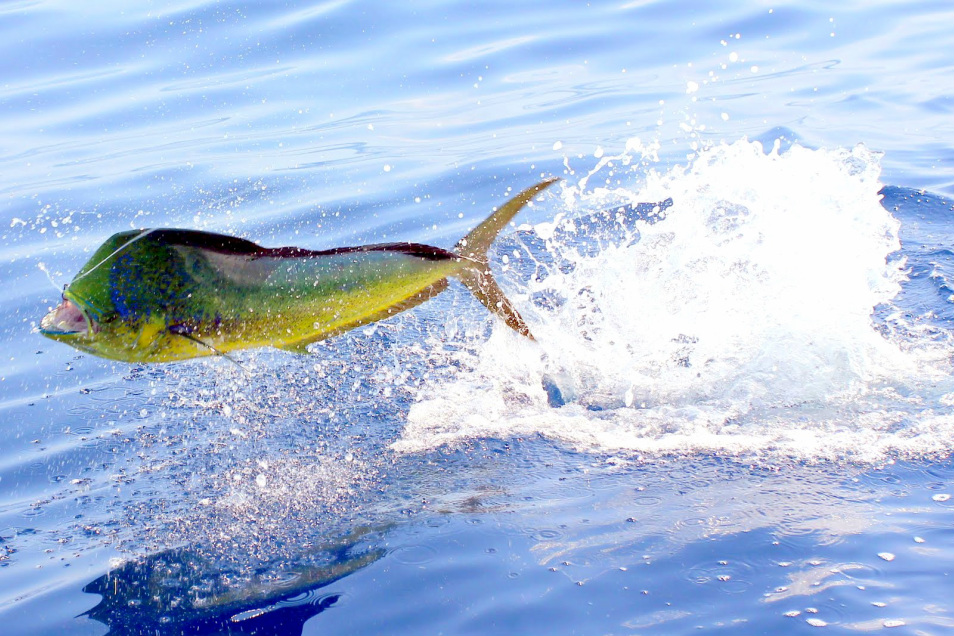 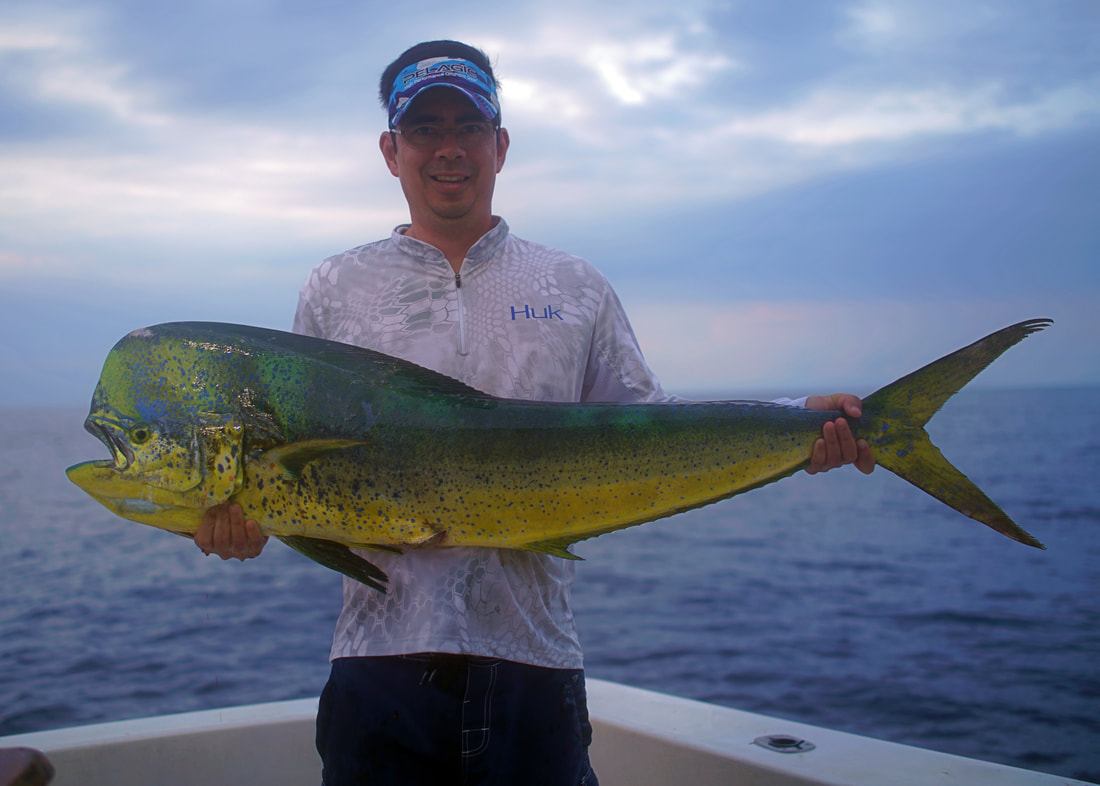 Click on a pic in the gallery below to enlarge 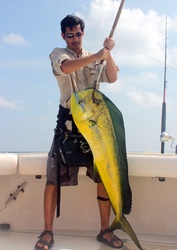 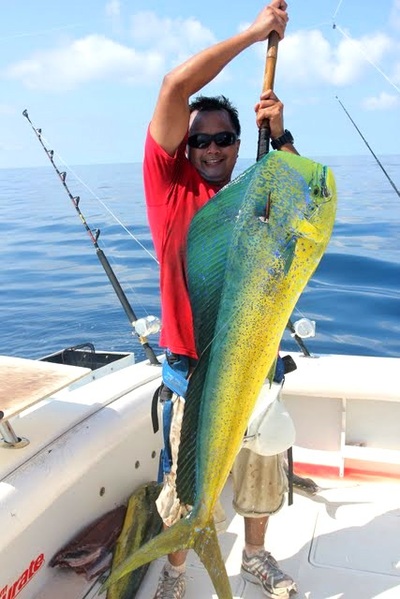 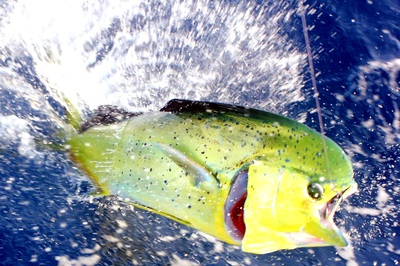 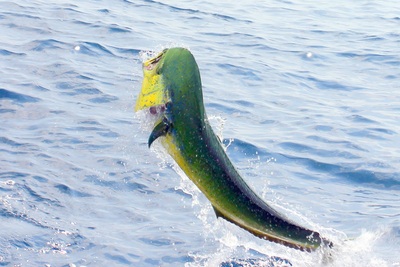 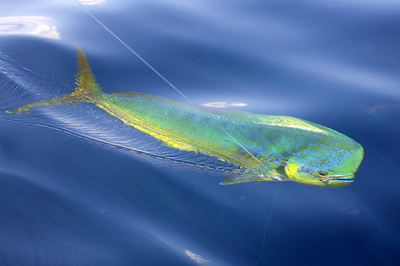 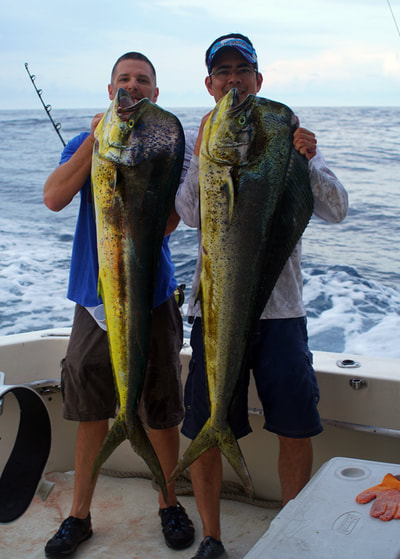