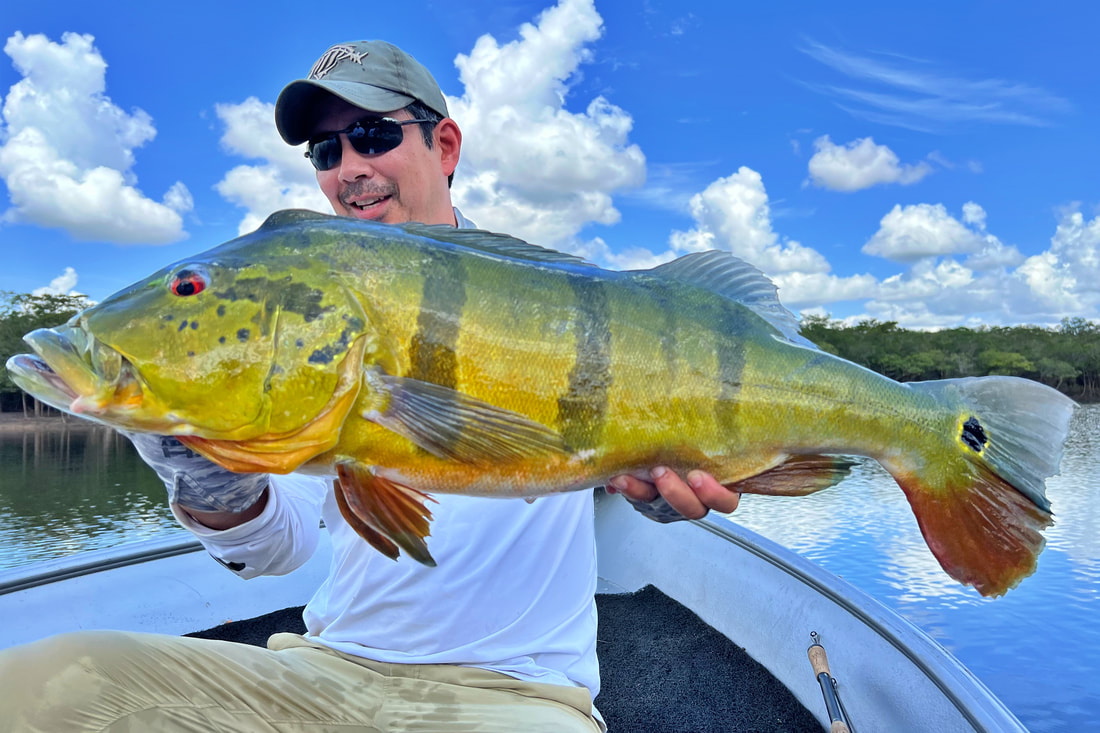 Peacock Bass are one of my favorite fish.  They have bright coloration and a ferocious attitude.  As soon as I saw a picture of one I knew I had to catch one (preferably more than one).  I caught my first one in a small lake in Kauai, Hawaii.  It was small but it jumped a lot and lived up to my expectations and whetted my appetite for more.  I've since had the opportunity to pursue them in Panama, Florida, Brazil, Bolivia, Puerto Rico, and Venezuela.  One of the great things about them is that each one looks slightly different in terms of coloration, as you can see in the pictures below.  A fully lit up peacock is one of the most (if not the most) beautiful fish in freshwater.  They are very aggressive and smash topwater lures which is their main appeal to most anglers.

There are several species of Peacock Bass, but their behavior is quite similar although their appearance and maximum size differs. The largest species, Cichla Temensis, is a truly awesome fish to behold when full grown.  The fish pictured above is a mature Temensis.

Peacock Bass taste very good but most are released.  They achieve weights up to around 30lbs but fish of that size are only found in the Amazon as far as I know, although it could very well be that someone in Asia has grown them that size as an introduced species.  In Florida, Panama, and Hawaii they have some of the smaller species and 5lbs is a large fish in any of those places.  A note on handling Peacock Bass - if they are over 5lbs,  be very careful grabbing them with your hand.  They thrash around much more violently than Largemouth Bass do and you could drop the fish and/or injure your hand.  Use a Boga Grip type tool and make sure you put the safety strap around your wrist so that you don't lose the Boga.

Want to get a sense for what it's like to venture down to the Amazon for these beautiful fish?  Check out this short video clip from my last trip:  Awesome Amazon Adventure

Peacock Bass are extremely powerful for a freshwater fish.  Their tails are very broad and they have a high percentage of muscle.  They will make blistering runs that can break line if your drag is not set correctly.  They can also straighten weak hooks and blow up bad knots with ease.  They sometimes head for cover and can be tough to stop before they wrap you up.  Most will jump at least once or twice during a fight and will violently shake their heads to dislodge hooks.  One of the top fighting freshwater fish in the world.

If fishing for the smaller species you can use fairly light spinning or baitcast tackle.  For the large ones in the Amazon 30lb braided line should suffice for jigs and small lures but if you are casting large lures you might want a thicker braid for insurance.  They don't tend to be particularly line shy.  For braid I go with Daiwa Samurai.  I like to fish with a 25-50lb fluorocarbon leader depending on how much structure there is.    I like the peace of mind of greater abrasion resistance.  Great reels for these are the Daiwa Pluton and Shimano Curado.  Click here to see tackle recommendations.

Peacock Bass are caught on both lures and bait, although in the Amazon they are primarily fished for with lures. 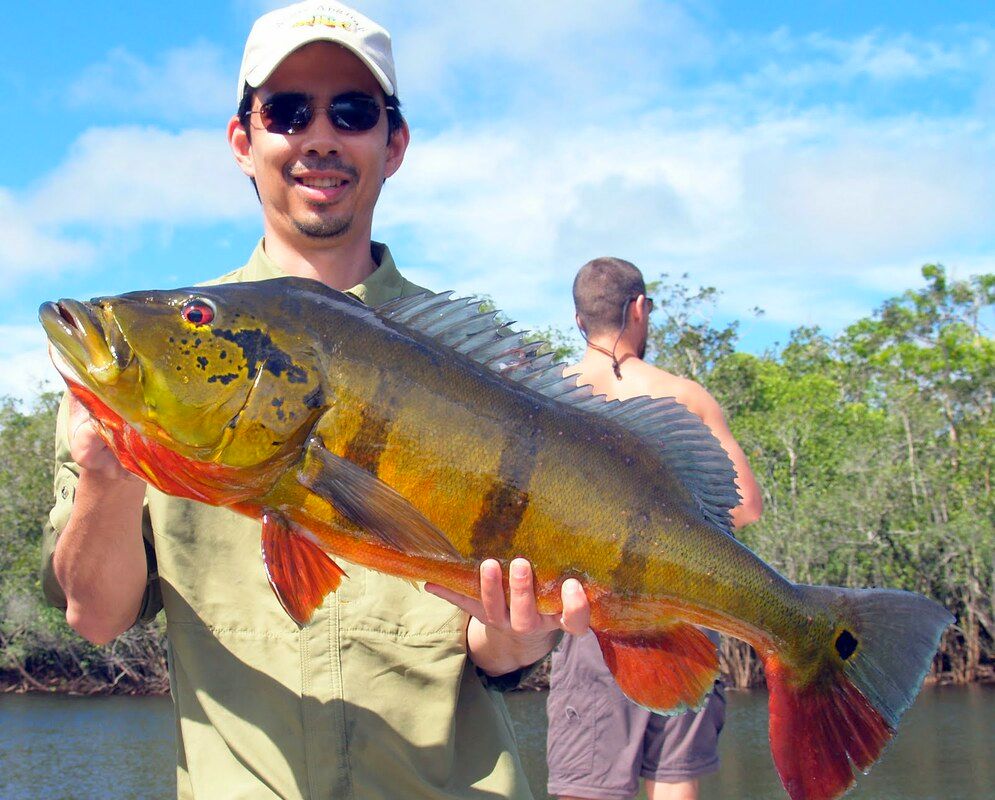 ​Large topwater propeller lures are well known to attract the large peacocks in the Amazon.  While these work, they are not a high percentage lure most of the time.  However, the massive explosion the peacocks make when they attack these is worth giving up a few strikes.  They should be fished in a rip-pause-rip manner most of the time.  I don't like giving lures a long pause; Peacocks often lose interest when things stop moving.  The rips should be 2-3ft so that you can throw up a lot of spray.  This is not a subtle lure and the average size fish you get is larger than other lures.  It's good to always have a heavier rod rigged with one of these to make a few casts over a promising point before probing with smaller lures.  For years the old standby was the Luhr Jensen Woodchopper but other lures have since come on the market.  I like the Pavon Prop because it is less tiring to work but it is hard to find.

Probably the best high percentage peacock bass lure is the bucktail jig of the type pictured below.  Those catch both large ones and small ones.  They also have the side benefit of catching a number of other interesting Amazon species that don't usually hit the prop lures.  If you want action, this is your lure.

A jerkbait like a Rapala X-Rap or a Yo-Zuri Crystal Minnow should catch some fish most of the time if fished erratically with quick jerks.  I once had both a 15lb and a 6lb peacock hooked on the same X-Rap.  After a tough back and forth battle the knot gave right at the boat.  I let fly with a few choice expletives and thought that would be the end of it.  However, a few minutes later the lure floated up with the fish still attached.  I guess they got tired fighting each other.  We floated closer and I lobbed a cast with another lure to try and snag the lure.  Unfortunately the splash spooked the bigger fish and it powered downwards, taking the smaller fish with it.  I can still see them sinking into the depths and the pain has only lessened slightly with time.  A large caiman headed their way and I'm guessing they got eaten by it.

Walk the dog type lures like the Heddon Super Spook can work sometimes.  I like fishing them in quiet areas where the larger propeller baits might be too much noise for the fish.  I also like fishing them in the early mornings, just because the quieter cadence seems to match the quieter morning environment.  I don't know if they are more effective at that time or not, but it just seems to fit.  Fishing with these is a nice warm up to throwing big prop lures the rest of the day if that is what you are into.

For smaller peacocks in Hawaii, Panama, and Florida small jerkbaits fished erratically work well.  I fished once in Florida during the spawn and the peacocks were visible close to the bank guarding nest sites.  They were not eating, but if you could get a cast a jig exactly on top of their tails they would strike out of reflex.  The casting had to be extremely precise (a cast even two inches off would not garner a strike) but we caught a good number of fish that way. 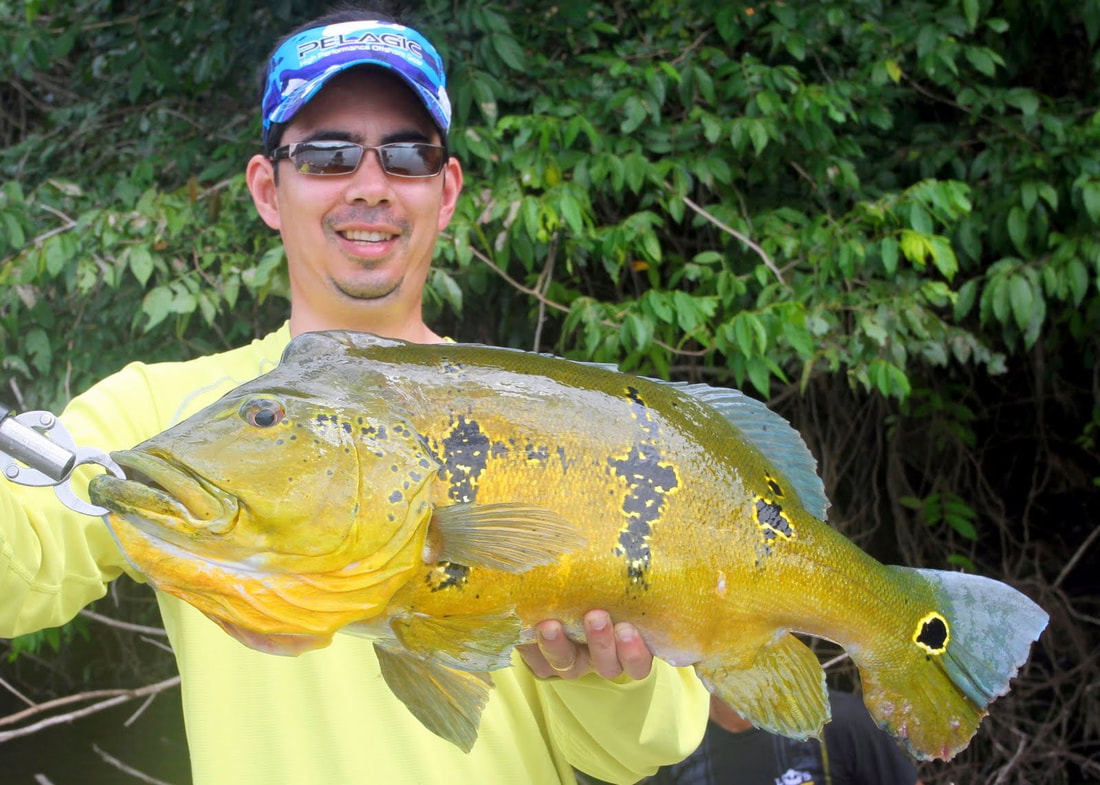 Peacock Bass caught in Brazil on a Heddon Zara Spook. Note how this subspecies has a deeper body.
There are a large number of subspecies of Peacock Bass, with more seemingly discovered all the time.  Hybridization also complicates classification.  Below are a few examples of some of the different species I have caught.  Some of the smaller ones are quite striking. 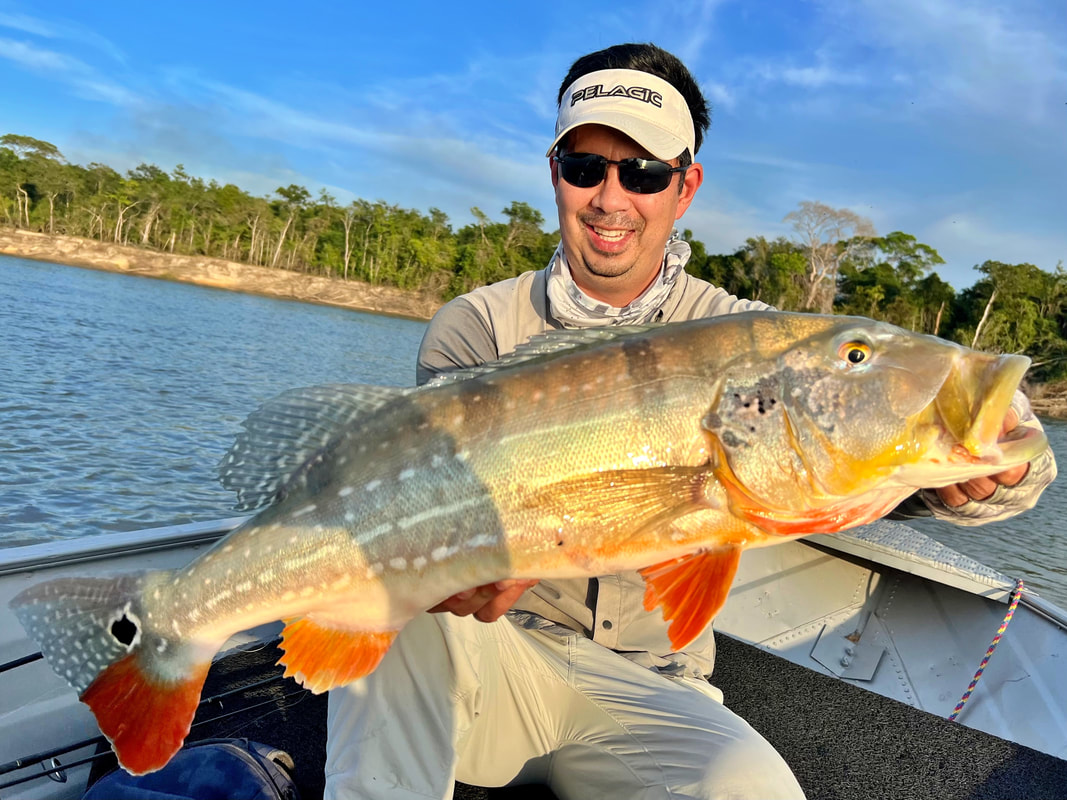 This is the largest Speckled Peacock I have seen. Usually ones this size are in the 3-bar phase.
Going to the tropics to fish for Peacock Bass?  Click below for some stuff you will want to bring.  You don't want to go all the way out there and end up missing out on the fish of a lifetime because of substandard gear:
Peacock Bass Baits

I have not done much bait fishing for peacocks.  In the Amazon the piranhas often make it impossible.  I tried slow trolling a big baitfish behind the boat in Brazil and the water literally boiled and the piranhas consumed it in seconds.  In Panama you can successfully fish for smaller peacocks using the small sardine-like baitfish that are abundant in Lake Gatun where they are found.  There are a ton of small Peacocks in that lake.  I'm sure baitfish work well in areas with no piranhas.

Where to get the big Peacock Bass

The Amazon river tributaries are where you get the big ones.  The main river does not have a good fishery and many of the tributaries do not either.  The best fisheries are generally slow-moving "blackwater" tributaries.  You get a very short window in most areas to fish; usually just a few weeks per year.  Most of the year the water level is too high and the water extends into the jungle.  The fish head in there and become very spread out and very hard to catch.  A good operator will cancel a trip at this point rather than let anglers suffer through poor fishing.  The dry season concentrates the fish in a smaller area and makes them much easier to target.  However, the dry season can (and nearly always does) vary from year to year in a particular area and rains during the dry season can raise water levels and make fishing tough.  This fishery is tough to time but when you do it right it's amazing.

The Amazon fisheries are generally accessed in one of three ways:  fixed lodge, mothership, or floating tents/camping.  The fixed lodges can offer good fishing but if water levels are off, which they often are, you could be stuck catching few if any fish.  Motherships offer more mobility to go where water levels are optimal, although in very dry conditions they may not be able to access all areas.  Floating tents/camping offers the most mobility and therefore the best shot at hitting things at the right time.  If the fishing is not good, you can move.  There is really no way to fish these remote areas on the cheap as many are in restricted Indian reservations and you could be in serious trouble if you just tried to go in there on your own.  If you want to chase big Peacock Bass you need to resign yourself to the cost.

Some of the other non-Amazon fisheries are much less sensitive to water levels.  Lakes in Venezuela such as Guri or Camatagua offer year-round fishing although like anywhere they can run hot and cold.  There are also significant security concerns in many parts of Venezuela.  I lived there for 6 years and still have concerns, especially about Caracas.  Florida has good year round fishing for the smaller Butterflies which are fun to catch and brightly colored.  You can catch all you want in Lake Gatun, Panama but they are very small (see pic below).  Brazil has some lakes with good numbers of small and medium size fish.

The above barely scratches the surface on how to catch Peacock Bass.  The resources below will provide a wealth of information:

If you want to catch Peacock Bass in the Amazon, I recommend these guys:  www.acuteangling.com.  They are reputable and their site has a wealth of information on Peacock Bass and other Amazon species.

Fish Colombia has some great trips to that beautiful country.

This site has good info on how to catch smaller Butterfly Peacocks in Florida:  http://inshore.com/tips-peacock.html

The Peacock Bass Association has good info on how to catch them in many different places.  They have several forums with invaluable info and a list of approved outfitters.   www.peacockbassassociation.com

If you are in Puerto Rico this guy can put you on some of the Butterfly Peacocks there:
http://peacockbassandtarpontours.com/index.php

If you are in Panama these guys are a great outfitter to fish Gatun Lake near the city:  Pesca Arenosa
​
I have pursued Peacock bass in many parts of the world.  Below are some examples from different places:
Although they are not the biggest, Peacock Bass in South Florida are the prettiest, in my opinion.  Below is a slideshow of some of the ones I've caught there: 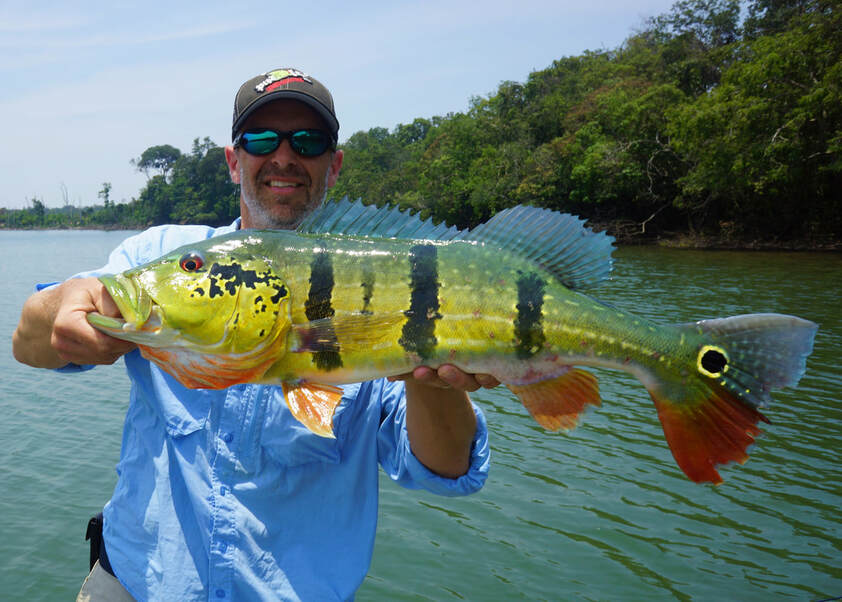 The author's friend Gary with a beauty caught in Colombia. Incredible color and markings. 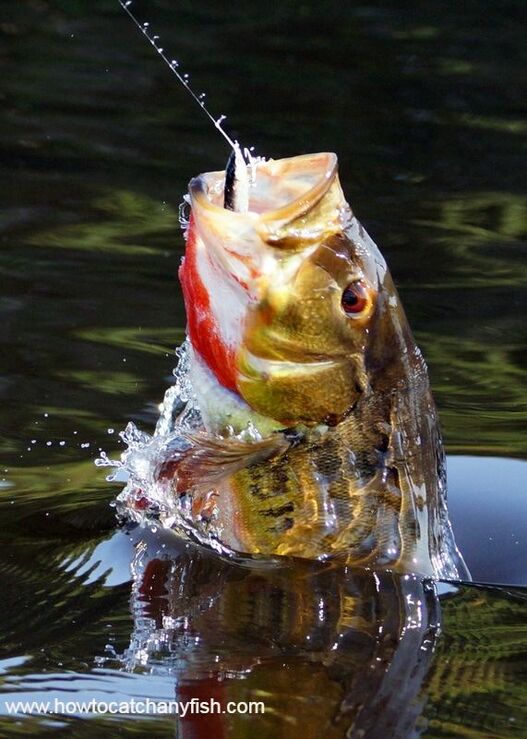 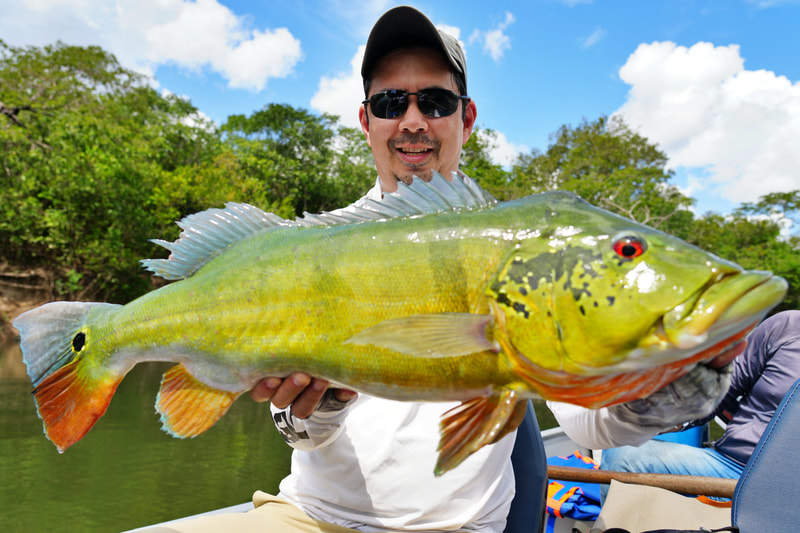 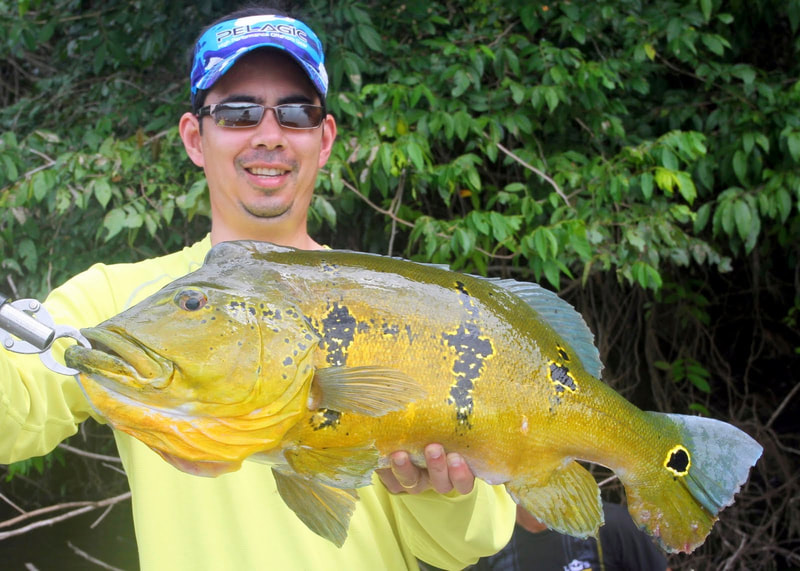 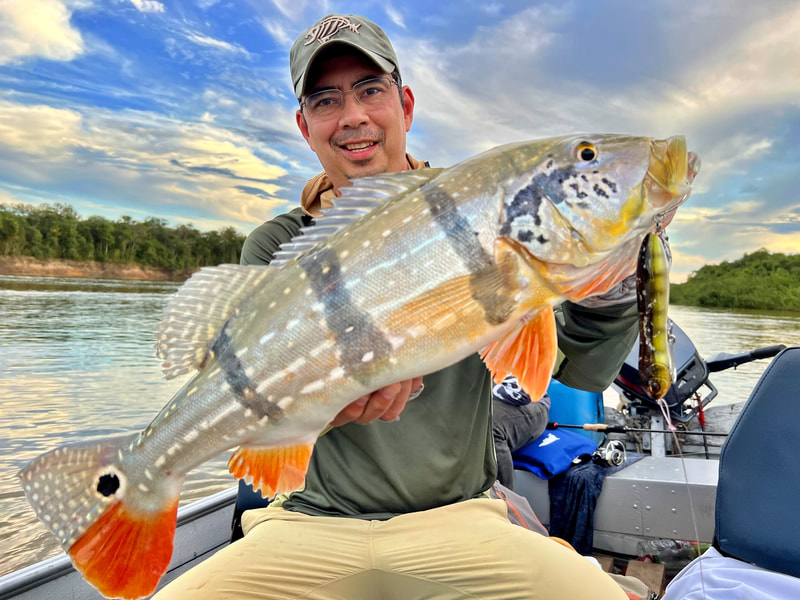 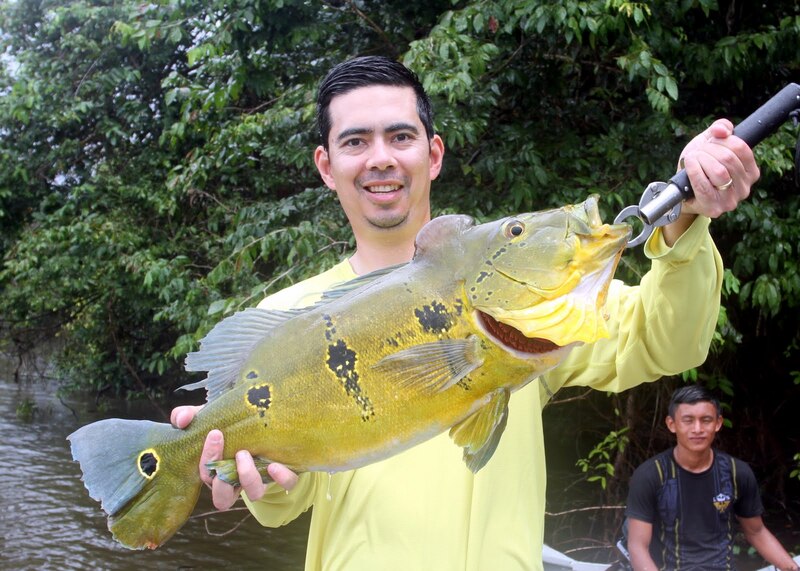 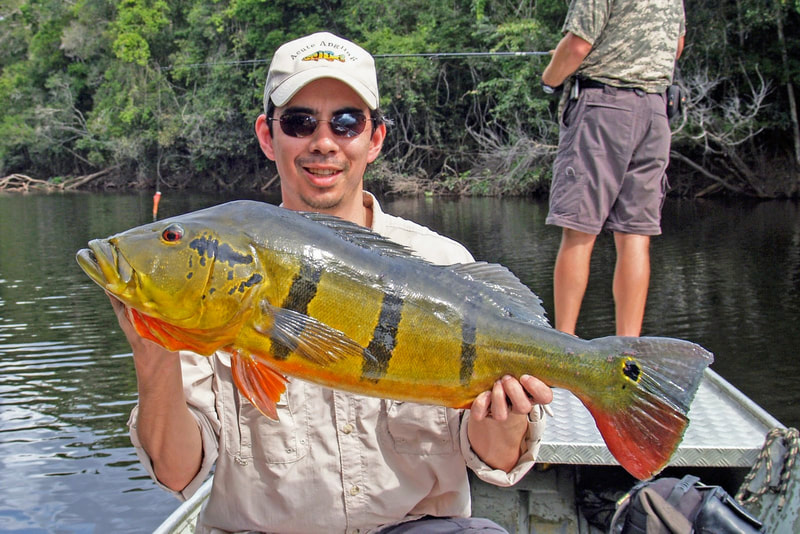 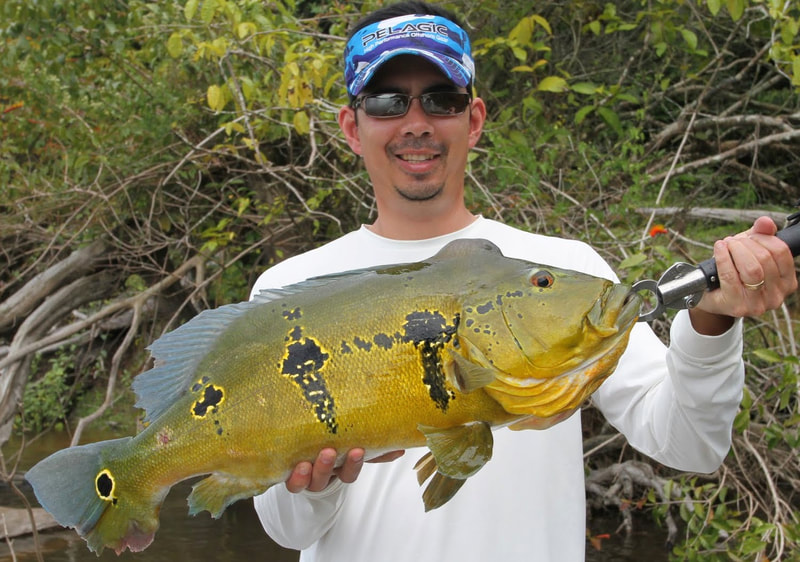 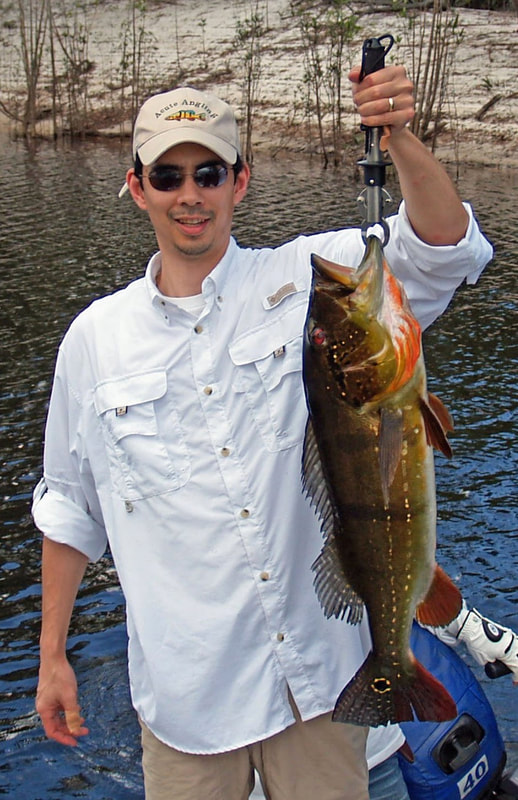 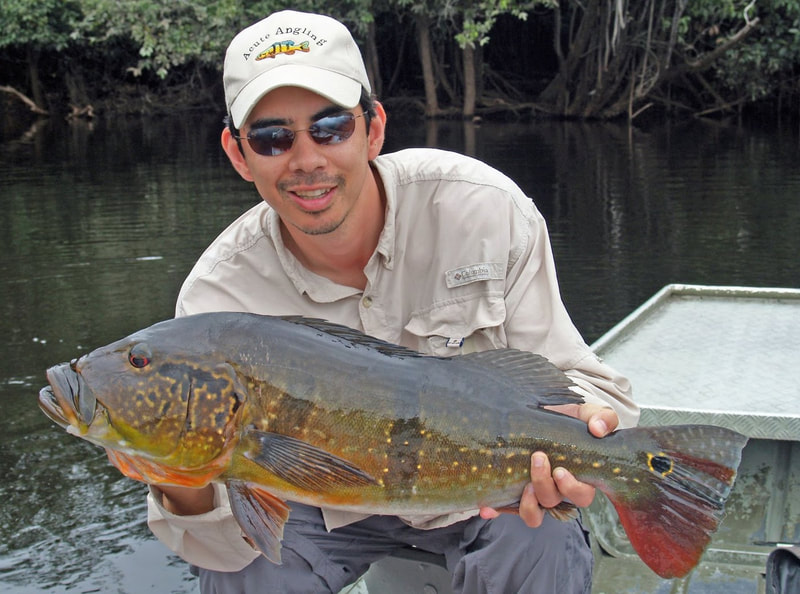 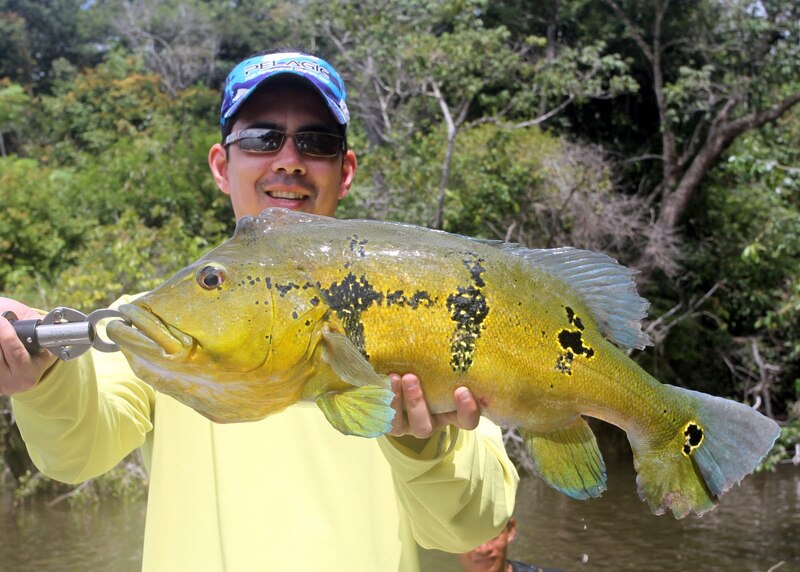 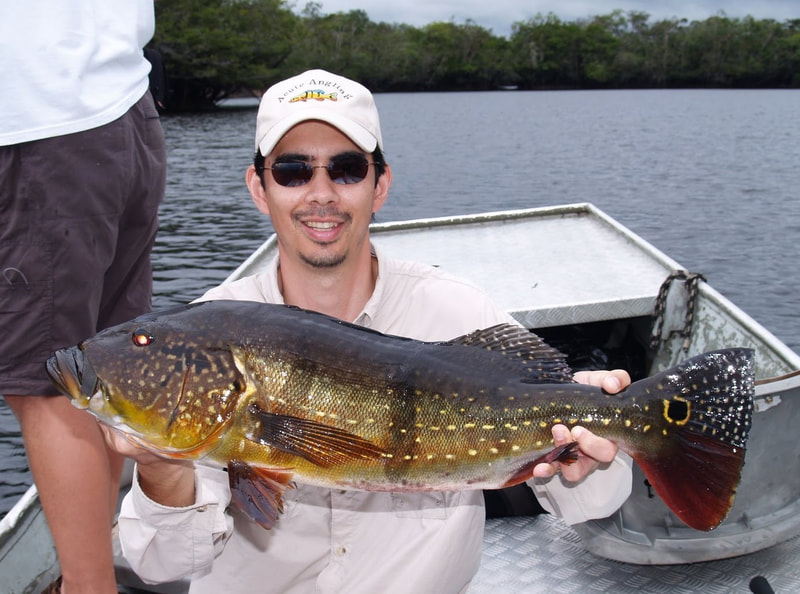 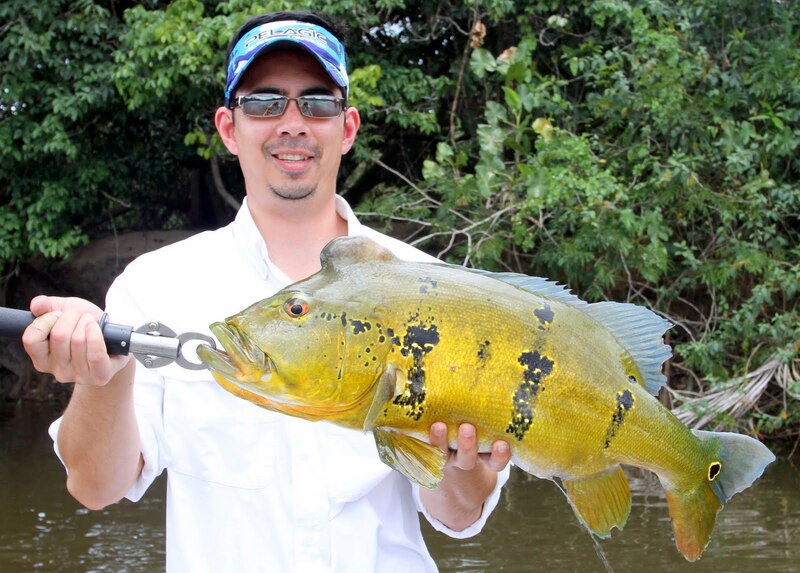 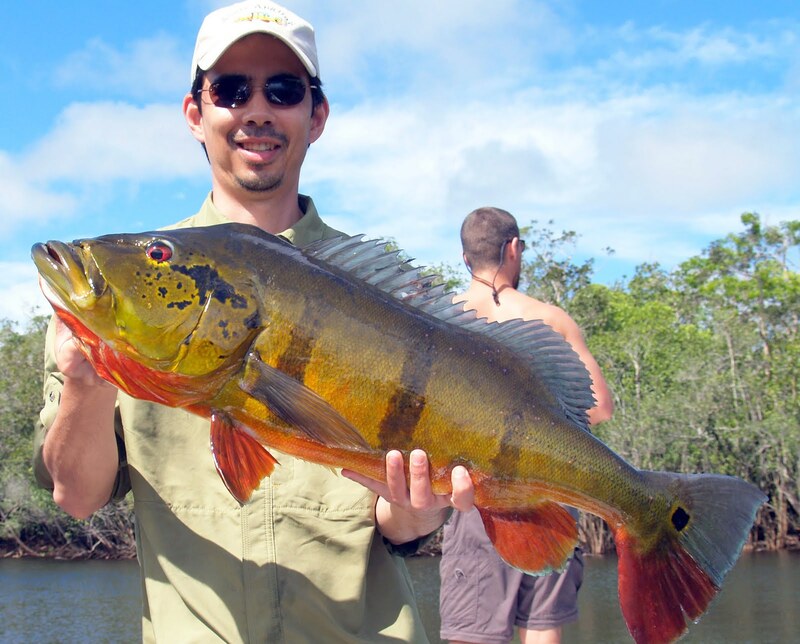 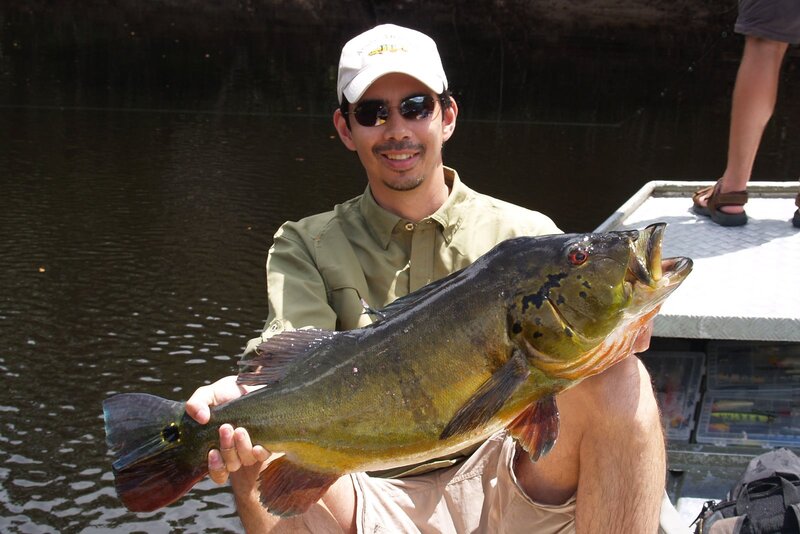 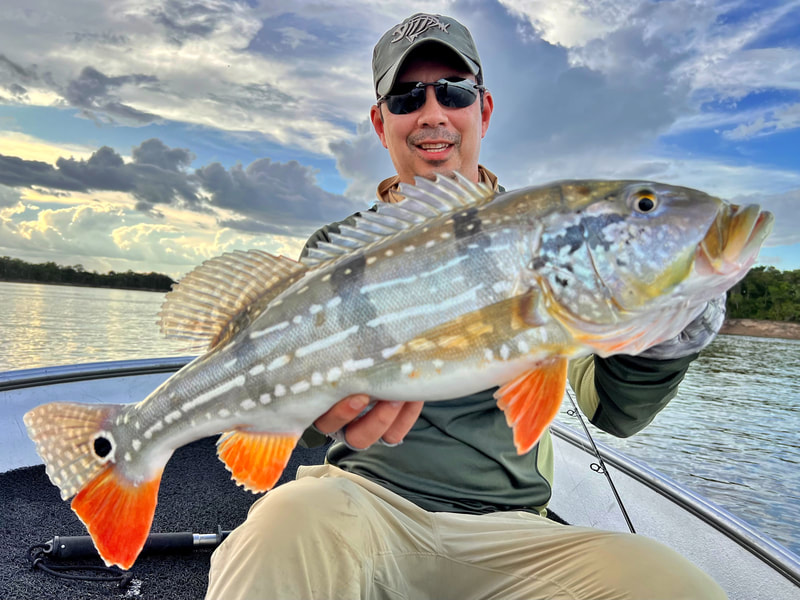 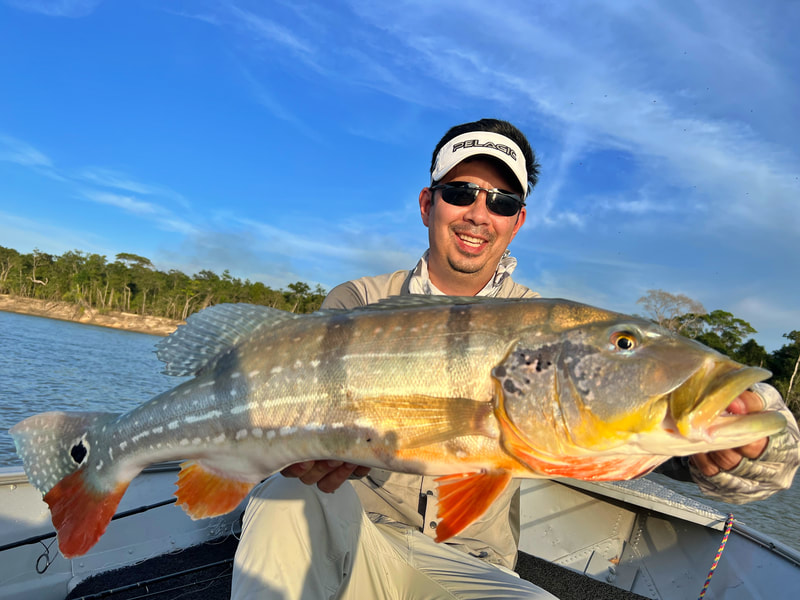 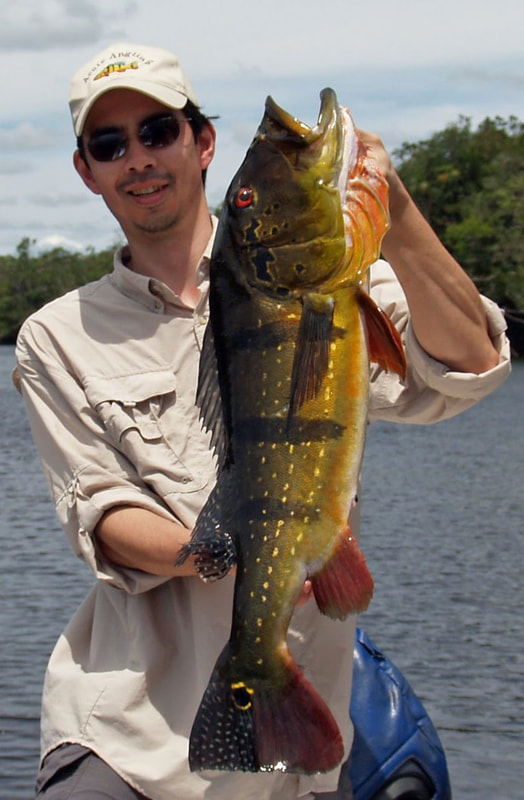 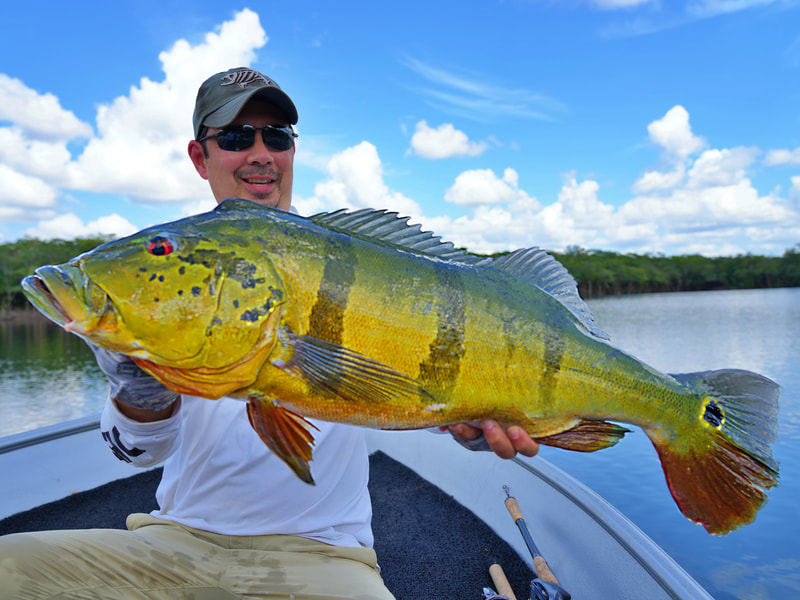 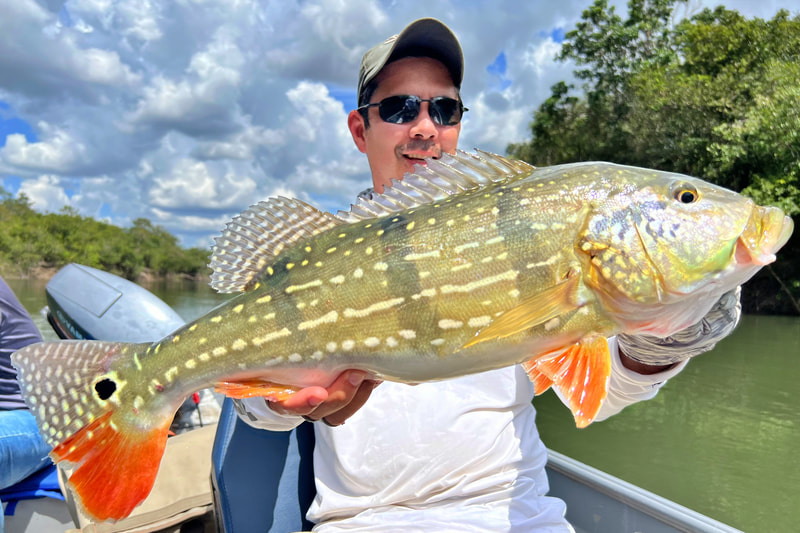 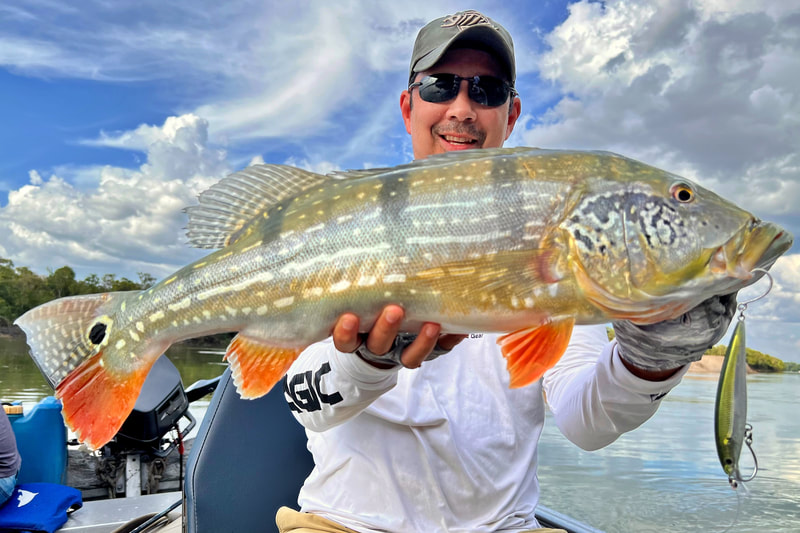 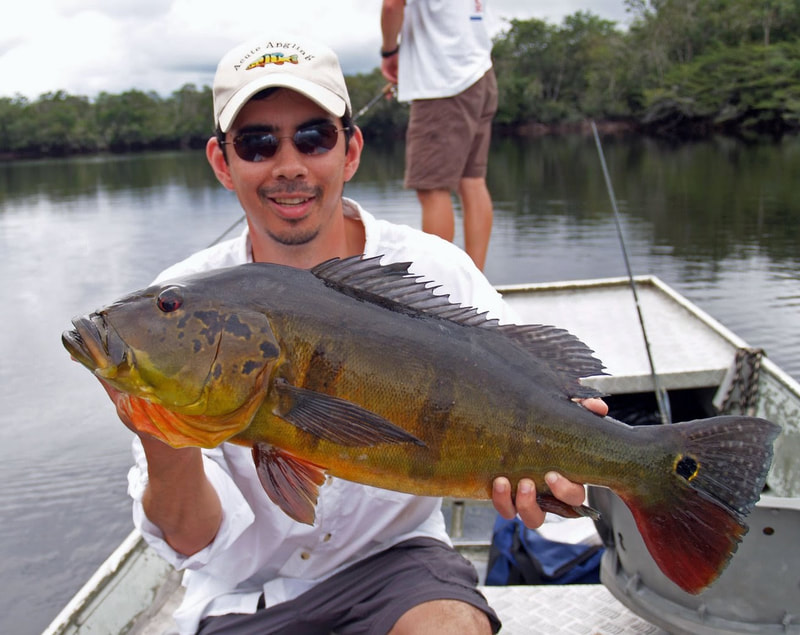 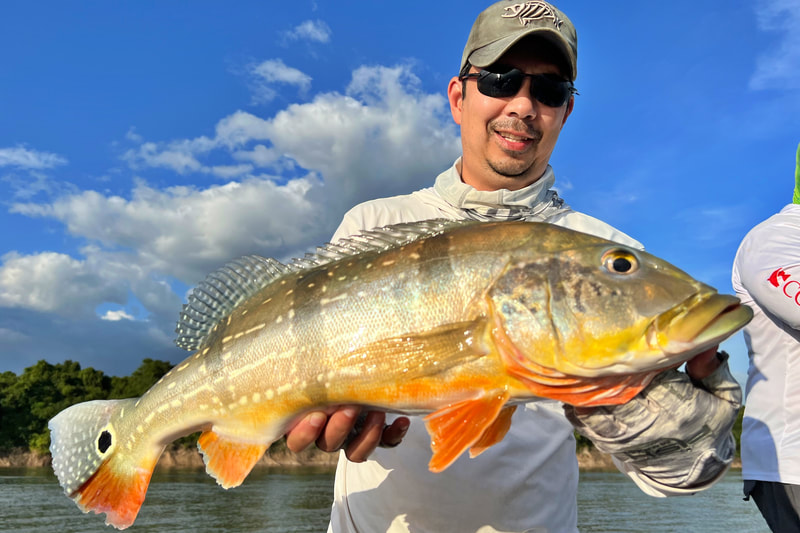 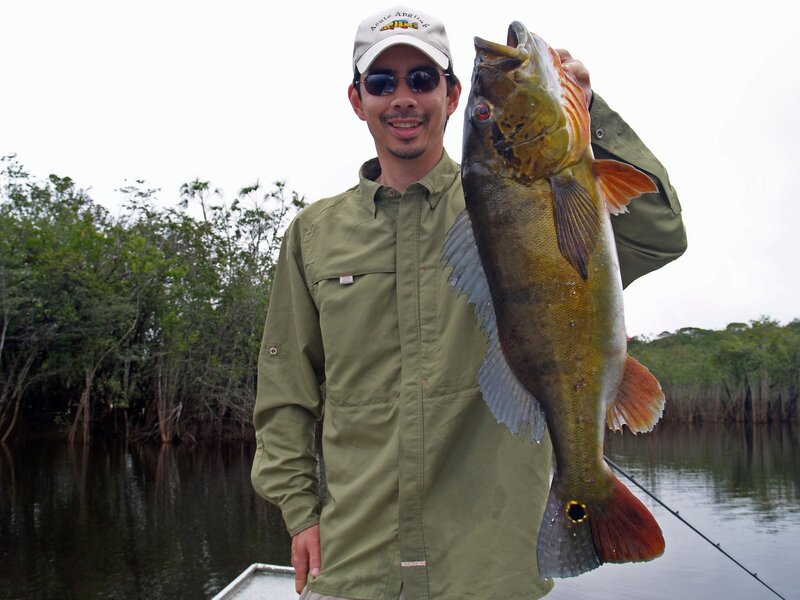 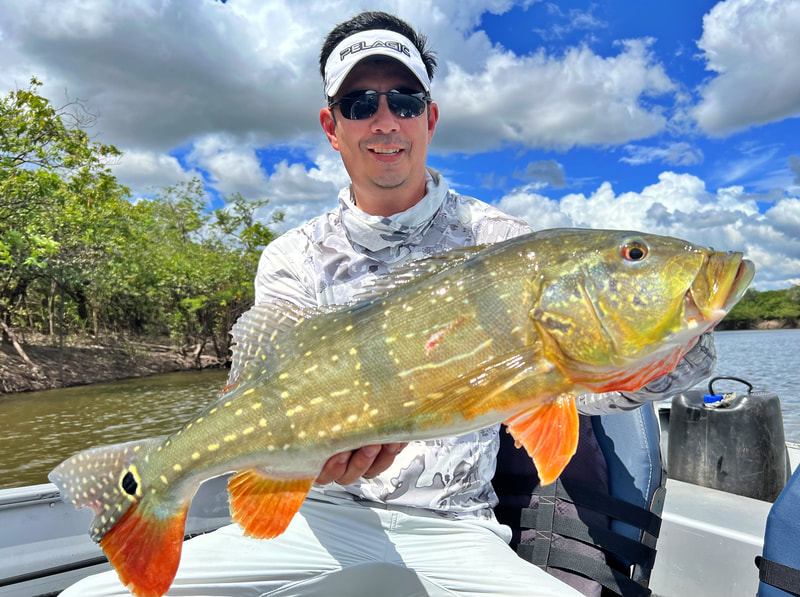 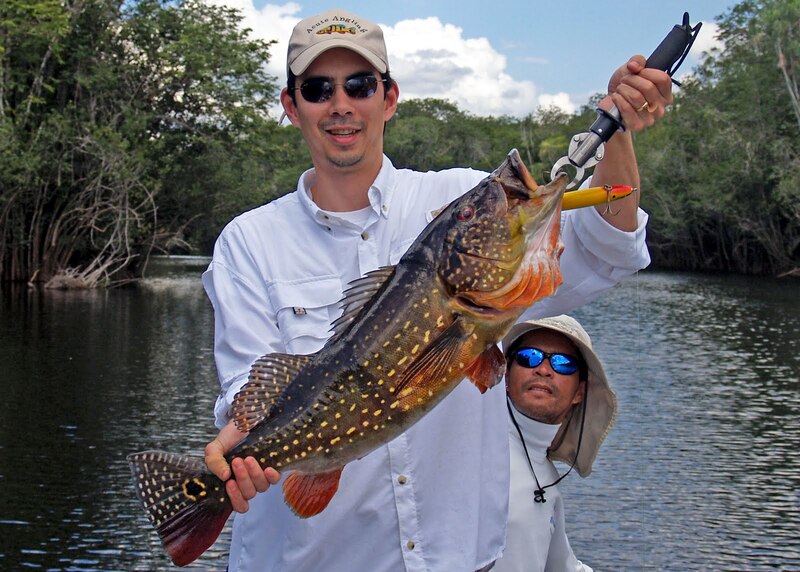