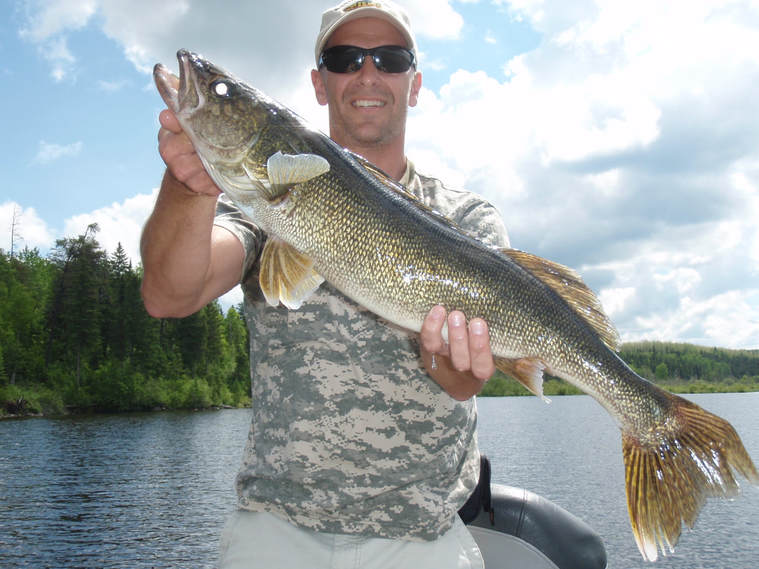 Walleye are a member of the perch family.  They have a long, slender body with a spiny dorsal fin.  They are also related to, and closely resemble the sauger.  Walleyes achieve a larger maximum size and can be identified by the white spot on the lower half of their tails.   Walleyes average around 14-22” and 2-4 lbs in most lakes, but can achieve much larger sizes.  The world record weighed 22 lbs.  30” is a common benchmark for a true trophy.  Like the yellow perch they are an excellent eating fish.  As a result they are a primary target of anglers in water bodies where they are present.  Walleye are native to the upper Midwest and most of Canada, but have been stocked as far as the east coast, and as far south as Texas.

Walleye are terrible fighters for their size.  They are slender and just don't pull that hard.  You can catch them on very light tackle.  It's almost like they want to come join you for dinner.

The vast majority of my walleye fishing is done with a medium action spinning rod paired with a spinning reel spooled with 8lb line.   I prefer to use graphite rods as walleyes are notoriously light biters.  With a fiberglass rod you may have trouble detecting a subtle bait pickup.   There are plenty of options out there.  If price is not an issue, St Croix makes excellent walleye rods.  If you are on a budget, The Berkeley lightning rods are hard to beat for the price.  Walleyes are not known for line peeling runs so a 2500-3000 size reel will hold more than enough line.
​
I generally use monofilament line.  Walleyes can be line shy and finicky.  In those instances, or in extremely clear water you may want to go with a fluorocarbon line or fluorocarbon leader tied to a braided main line.  These no stretch lines will also help if you are missing subtle bites.   Walleyes do have teeth, but not the line shredding variety that northern pike have.  I check my line frequently for any nicks or damage and re-tie if I find anything.  As a result I don’t have many issues with getting bitten off.  Wire leaders or braided lines with no flouro leader are probably going to get spotted and you will not get nearly as many bites using them.
​ 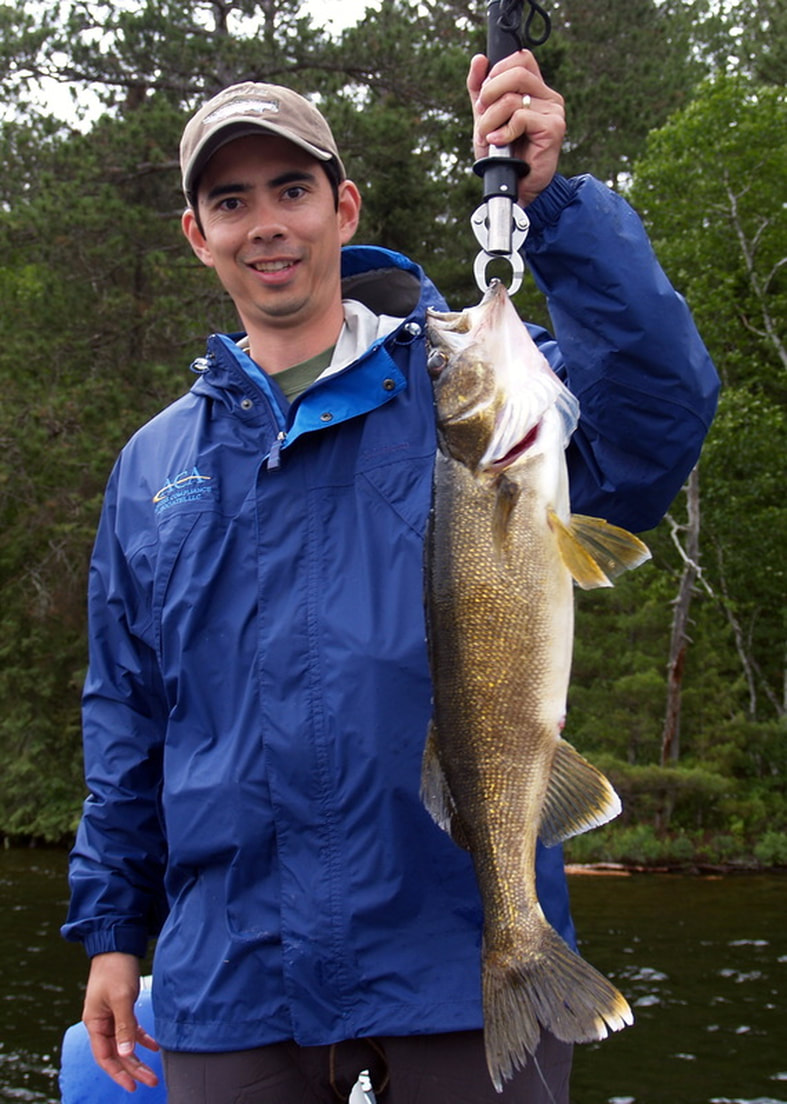 ​With the popularity of walleye fishing, there are endless options for catching them.  Anything from trolling open water for suspended fish to ice fishing in the winter can be productive. Many rivers have a spring spawning run with fish congregating in their spawning ground or below dams when the water temps get to the mid to high 40 degree range.  The smaller males will get there first, but the big females won’t be far behind.  Look for gravel out of the main current for spawning fish or those staging prior to the spawn.  Consider releasing anything over about 18” as these are generally spawning females needed to keep the population healthy.  In lakes, spawning occurs over a gravel bottom.  Here in Wisconsin, most lakes are not open to fishing until after the spawn is over.

Later in the year I will generally concentrate on drop off areas with rock or gravel.  Bait should be kept within 1 foot from the bottom in these areas as the fish will generally be close to the bottom.  Slip bobbers or a jig tipped with live bait can both be effective in these drop off areas.  If jigging, drop the bait to the bottom, bring it up a few inches, and hang on.  Sometimes dead sticking the bait is effective, and other times you will need to put some motion in the jig.  Occasionally drop the jig to the bottom and then lift it back up.  Often times fish will bite as the bait drops.  When lifting, if you feel any resistance, set the hook.  Experiment with both methods until you figure out what the fish want on that particular day.  I use the lightest jig possible that still allows me to feel bottom contact.  For anything under 20’ without current, 1/8 ounce is usually plenty.

Weeds can hold walleyes in most bodies of water.  Your best chance of weed walleyes is early in the season, but some fish stick around in summer months as well.  Some of my largest walleyes were caught on musky tackle while fishing weed lines in the summer.  Be prepared for bite offs from pike if throwing cranks or soaking minnows in the weeds.

If casting crankbaits, deep runners that get near the bottom and bounce off of rock structure are best.  Snap jigging can be effective if the fish are active.  This consists of casting a jig and plastic, spoon, or blade bait out over structure.  The bait is allowed to sink, and as soon as it touches bottom it is snapped upwards and towards you.  This is repeated until the lure is back to the boat or out of the strike zone.

Walleyes primarily feed on baitfish so a number of baitfish imitators will get you hooked up.  For crankbaits both Rapala and Rebel make quality lures that I have caught plenty of walleyes with.  The Husky Jerk is a personal favorite.  I prefer the longer body minnow style crankbaits in colder water and save the shad shaped lures for when water temperatures rise.

Soft plastics are very effective.  One of my favorites is a simple curly tail grub on a jig head.  I like the Berkeley Power Grubs as they have scent in them that may help fish hold on a little longer so you can get a good hook set.  These can be vertical jigged, cast and slowly bounced back, snap jigged, or straight retrieved back.  A fluke style plastic minnow and jig head combo can be worked the same way.
​
Spoons, blade baits and inline spinners will also get eaten by hungry walleyes. 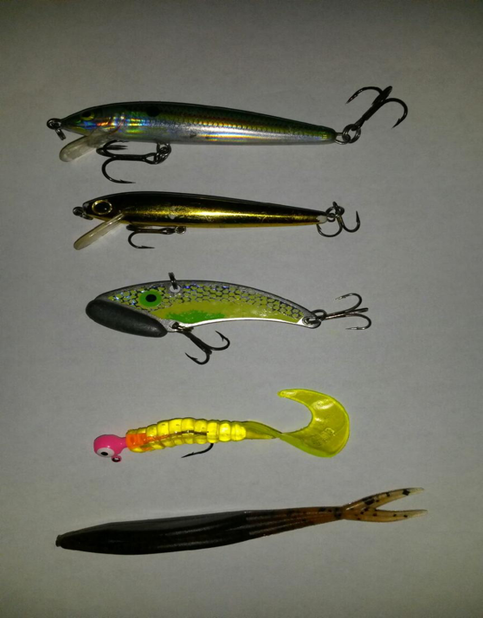 Rapala Husky Jerk, Rebel Minnow, blade bait, jig &power grub, Zoom fluke
Walleye Baits
Walleye will eat a variety of live bait.  Minnows, leeches, and night crawlers are all good options.  When the hot bite is on, it may not matter what you put in front of them.  On other days they can be very particular and will turn their nose up at one bait while readily attacking a different option.  I suggest bringing a couple of different bait types and fishing something different from your fishing partner.  Let the fish tell you what they want and switch over accordingly.  There are exceptions to every rule, but I have had more success with minnows during the cold water early season and leeches and worms later in the year when water temperatures rise.  If you are fishing a water body with a lot of northern pike I’d suggest using worms.  This will help prevent getting bit off as frequently by pike as you would if fishing minnows.  If the water body you are fishing has a lot of little panfish, minnows or large leeches are less susceptible to these bait thieves than worms.

Where to get the big Walleye

Wisconsin, Michigan, Minnesota, The Dakotas, Ontario, Manitoba, and Saskatchewan all have plenty of walleye water. The bay of Green Bay, Lake Erie, and the Canadian Shield area lakes all have a reputation for big fish.

The above barely scratches the surface on how to catch Walleye. The resources below will provide a wealth of information: 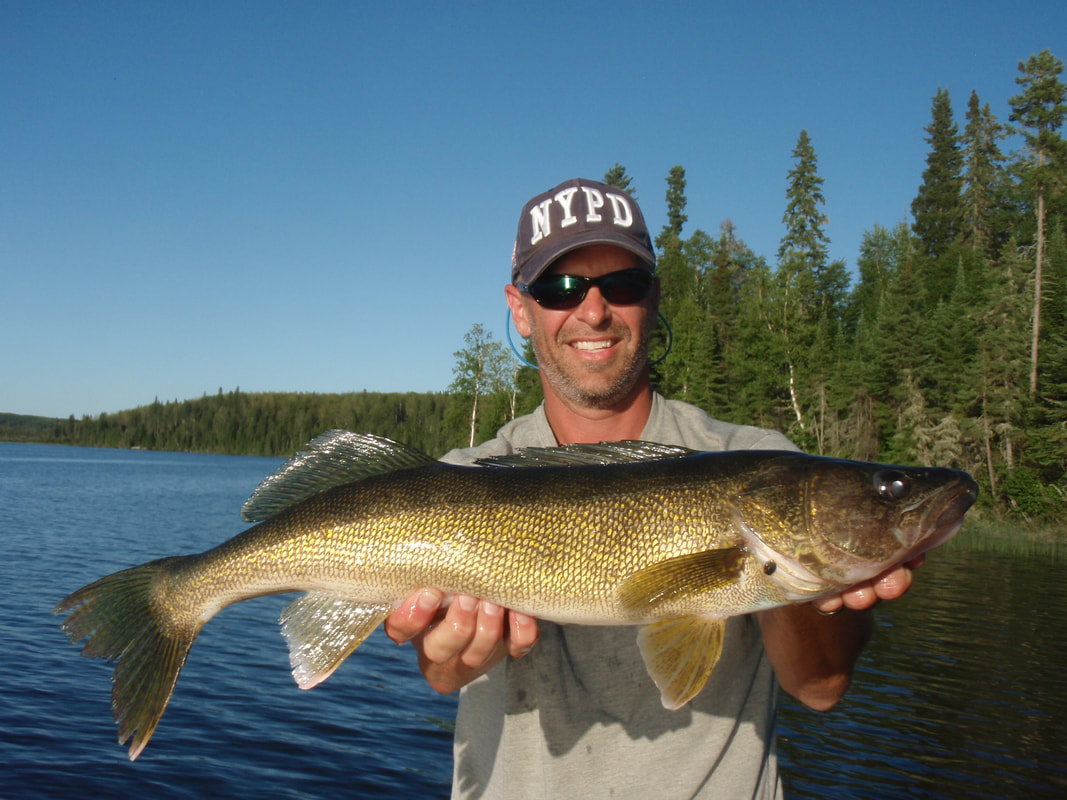 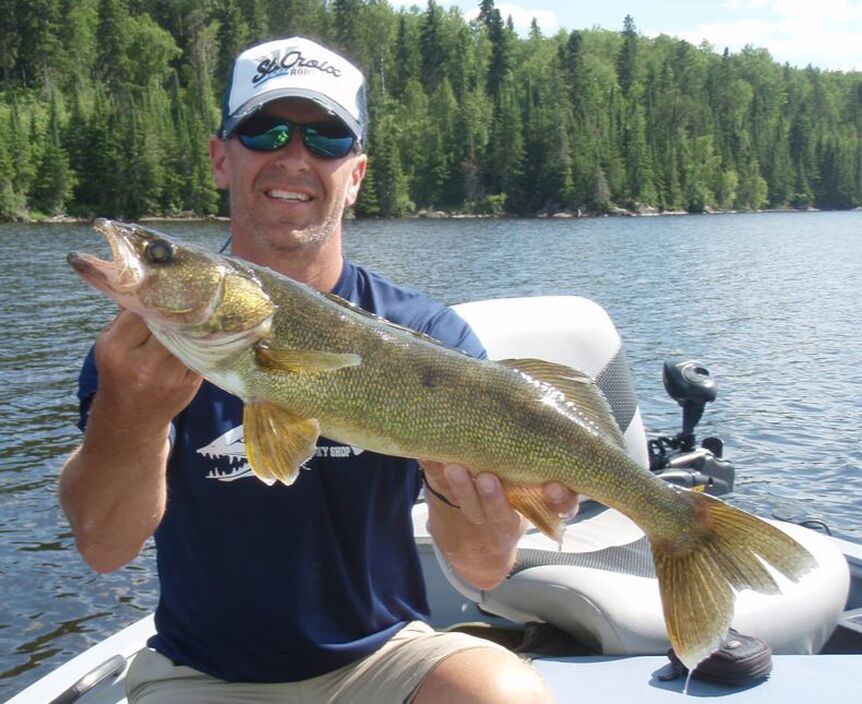