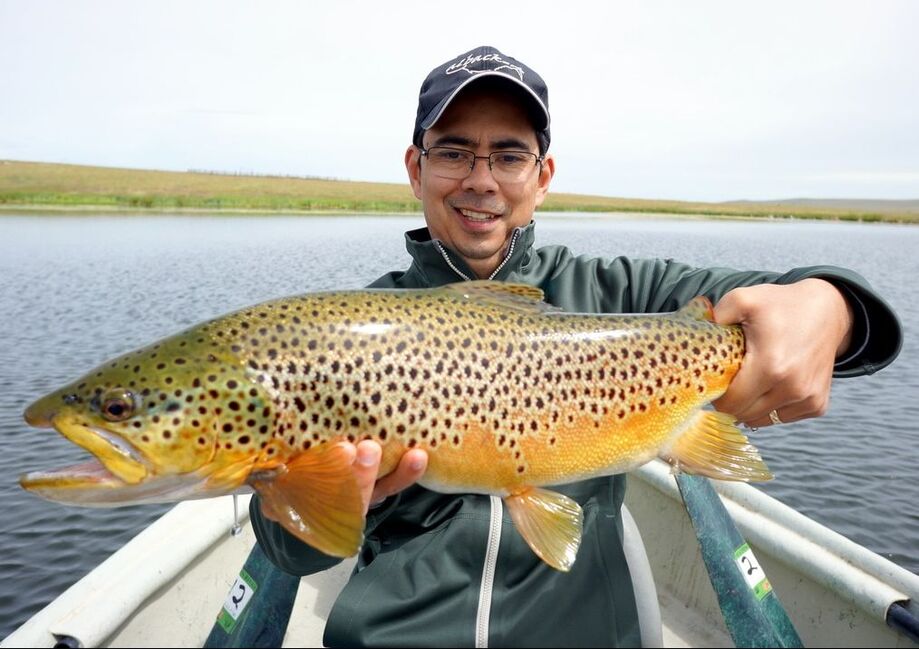 Brown Trout are originally from Europe but have been transplanted to a number of other places.  Brown Trout are less plentiful and tougher to catch than their cousins the Rainbow Trout.  Many of the same techniques that work for Rainbows will work for Browns.  They often live in the same places and eat the same things.  Bigger Browns tend to predate more on fish, including small Rainbows and other Browns. Browns can exceed 40lbs but fish anywhere near that size are extremely rare.  Anything over 4lbs is a nice fish in my mind.

Browns live in cooler water rivers and lakes and in some places like Chile and Argentina even run out to the ocean.  One of the big pluses of fishing for Browns, and trout in general, is the beautiful places where they live.

Brown Trout develop sharp teeth as they get bigger, so be careful when handling them.  They are probably good to eat but I have released all the ones I have caught.

Brown Trout Pound for Pound Fight Rating - 5.5 out of 10 on the Freshwater Scale

Brown Trout put up a good fight for a freshwater fish.  They may occasionally head for cover, although that is not a huge risk with them.  They make some jumps that can dislodge the hook, so you have to cross your fingers a little.  All in all a fun fish to fight.

A light action spinning rod will handle most Browns.  Like most trout, they have good eyesight so use the lightest line you can get away with.  Monofilament line is often a better option than braid in many cases as they have fairly soft mouths and the stretch of mono results in less pulled hooks.  Although the larger ones have teeth you cannot use wire or heavy leader or you will not get any bites.  You just have to hope they do not get the line in their teeth.  That is another reason it is better to fish for big Browns with lures.

When fishing in rivers, try to fish behind boulders and other structure.  The fish hide behind these structures in faster water and pounce on things that float by.  In slower current, they spread out more when feeding.  When resting they will find places to hide to avoid expending unnecessary energy.  Pretty similar to most fish in rivers.  In lakes they can be trickier to find; seek local knowledge for the time of year at the locale where you are fishing.

Brown Trout will eat spinners and spoons, but the big ones are often caught with minnow plugs and jerkbaits like Countdown Rapalas and Husky Jerks in the color of the local forage.  If you don't know what that is, you can usually be safe using a Brown Trout color pattern since they love eating their own young and wherever there are big Browns there have to be little ones.  Patterns that mimic baby Rainbow trout often work well also.  Flies are also very effective, especially larger patterns like streamers.  Also, marabou jigs can be deadly in the right conditions. 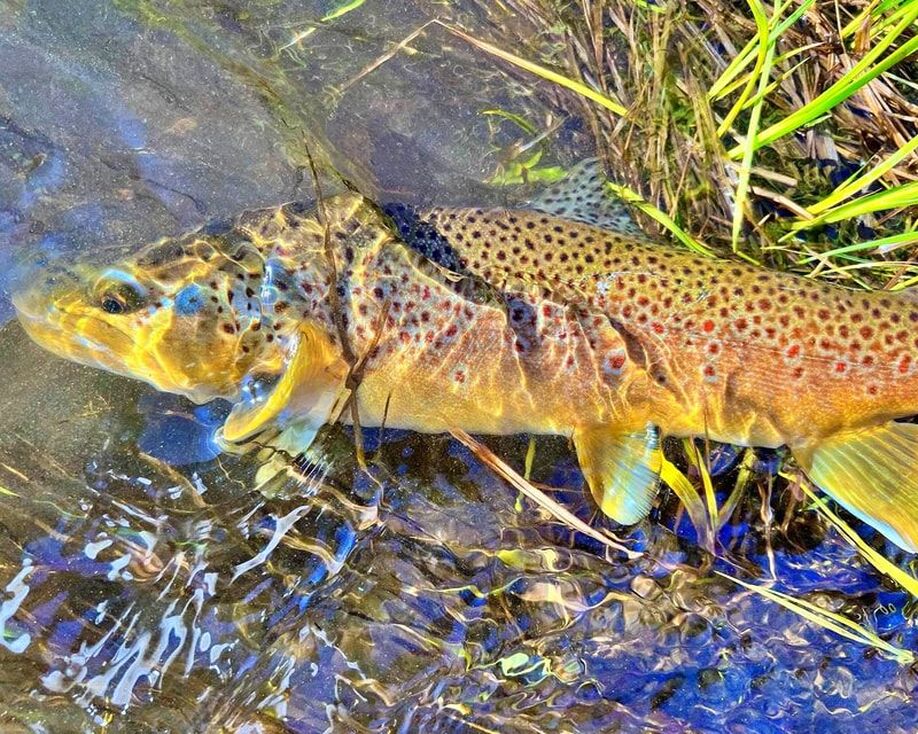 A beautiful Brown Trout about to be released in the Conejos River, Colorado
If you found any of the info on this site useful, please consider clicking one of the links below to purchase some tackle for Brown Trout: 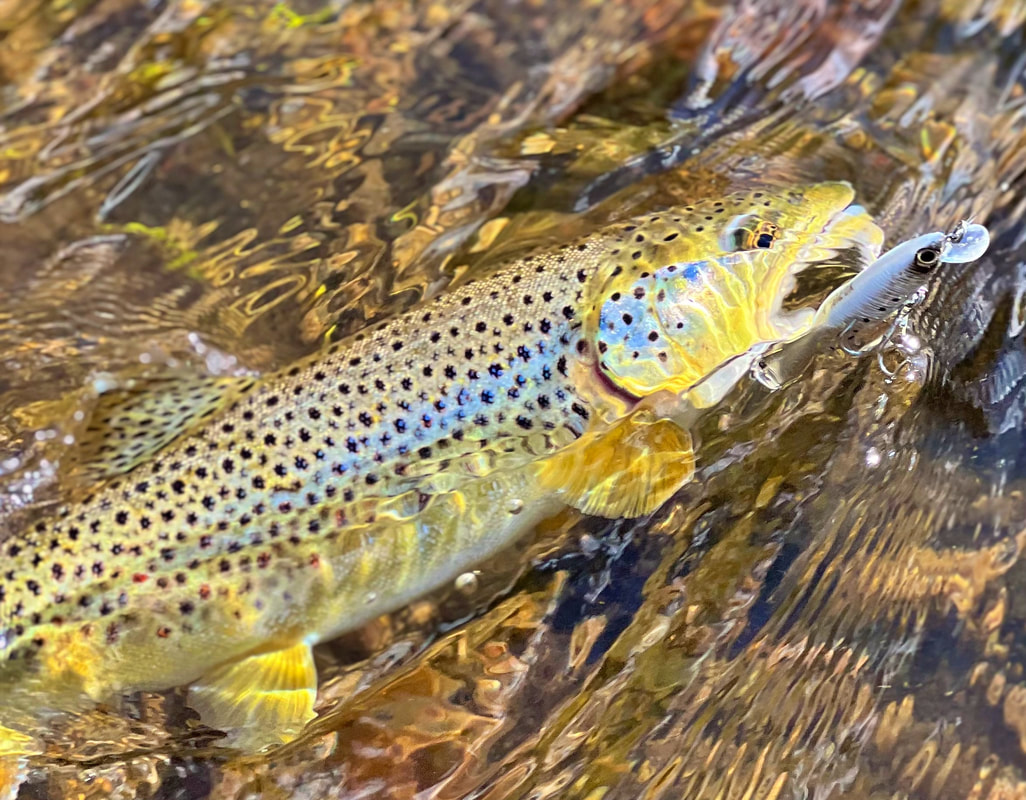 The Yo Zuri Pins minnow fools yet another Brown Trout 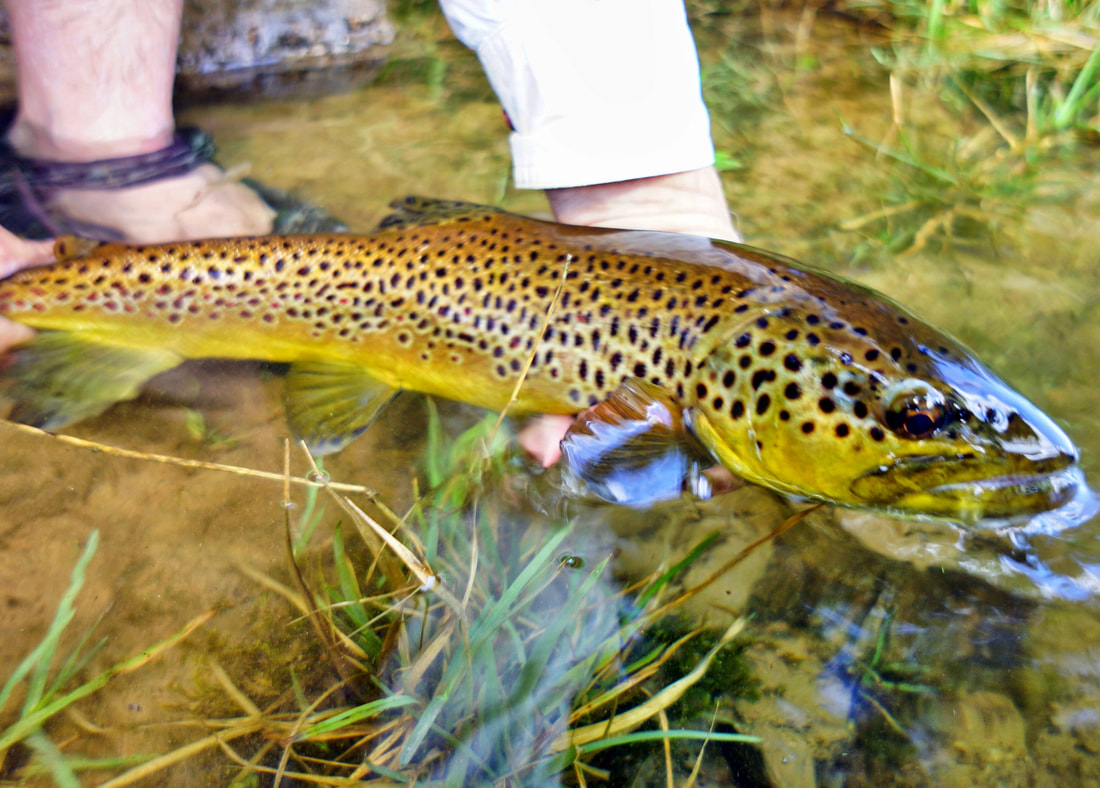 A nice brown about to be released in the White River, Arkansas
Brown Trout Baits

Where to Catch Big Brown Trout

The best overall fishery for Brown Trout that I know of in the US is the White River in Arkansas.  The record is a 40+lber but most are much, much smaller than that.  The browns are wily and tend not to feed when there are lots of people around, which is often on this popular river.  Anything over 4lbs is a nice fish here.  The White is very scenic and a pleasure to fish.

The best trophy Brown Trout fishery that I know of is in Milwaukee Harbor during the winter.  The harbor is kept unnaturally warm, so fish from Lake Michigan tend to congregate near the warm water flows inside the harbor.  I went one time with a guide and had great success using Gulp Jerkshads fished slowly on a leadhead.  However, this is probably the least picturesque place I have ever fished.  Downtown Milwaukee was literally 50 yards away and all kinds of trash including a used condom were floating by.  However, the fish were really stacked in there and they were huge.  My biggest was around 8lbs but I caught several over 5lbs in just a few hours fishing and my guide caught a couple in the double digit range.  I was hampered by the fact that I was colder than I have ever been in my entire life.  Despite having bundled up after a few hours I could not feel my legs below the knee and had to constantly look down when walking to see where my feet were so I wouldn’t trip since I couldn't feel it when they touched the ground.  I couldn’t fish well with gloves so my hands were pretty numb which made fishing tough.  It was literally a week before I felt warm again after that.

Here are some resources for catching Brown Trout:

If you want to fish the very scenic White River in Arkansas, I highly recommend this place:  http://www.whiteriverresort.com/
The owner Chris is an excellent guide and they also have rental boats if you want to do it on your own.

If you want to catch the big ones in Lake Michigan, this guy will put you on them:  www.wibigfish.com

If you enjoy fly fishing, Yellowstone Angler can put you one some nice ones in that area:  www.yellowstoneangler.com.  I went with guide Marcus Mcguire, who can be reached at mcguiredryfly@yahoo.com 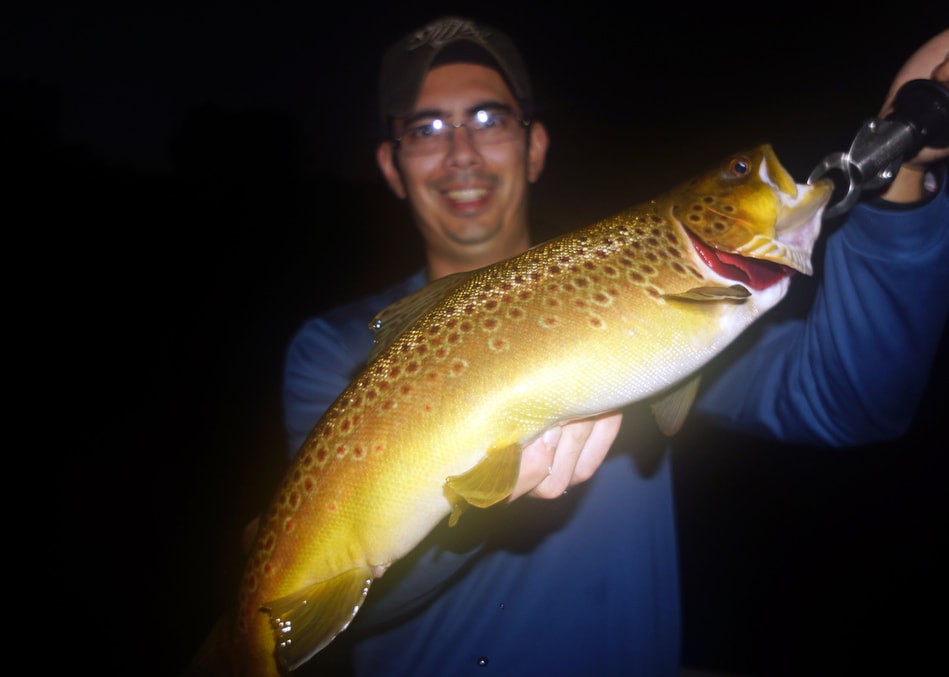 Browns bite well in the dark, and that can be the key to success in heavily fished areas 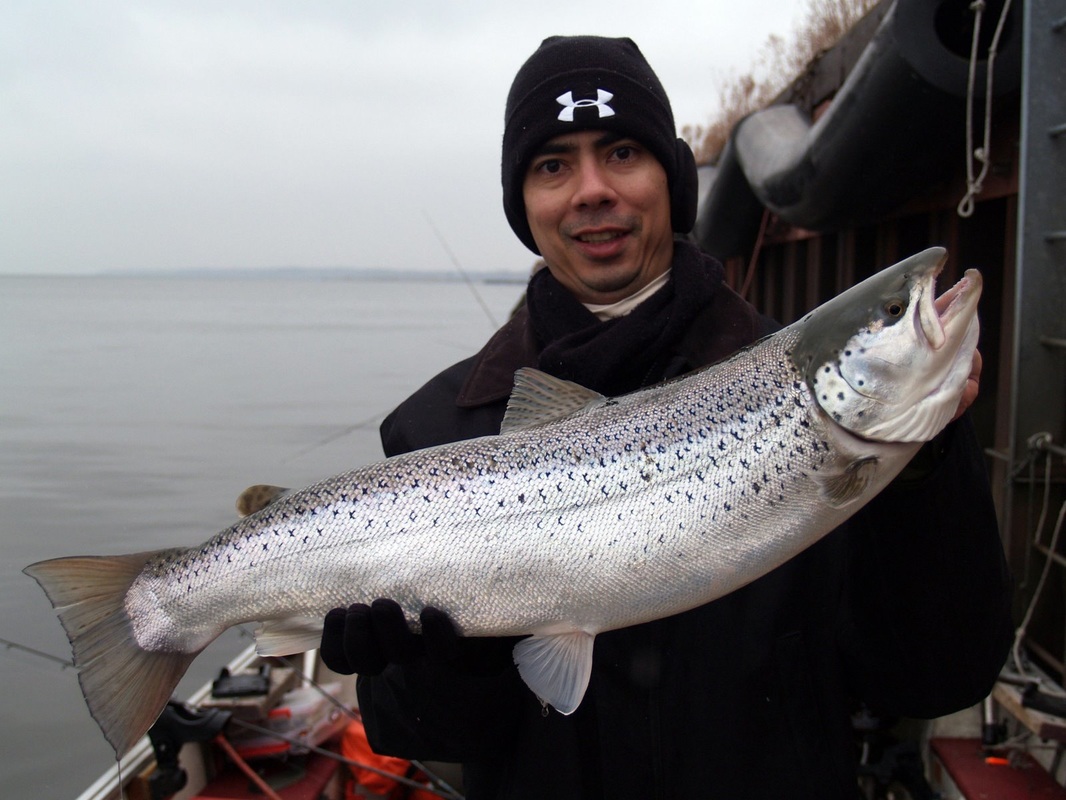 Brown Trout caught near Milwaukee, Wisconsin in February.  They can be caught in the cold if you are willing to be out there.  Note the completely different color pattern.
Some beautiful Conejos River Browns: 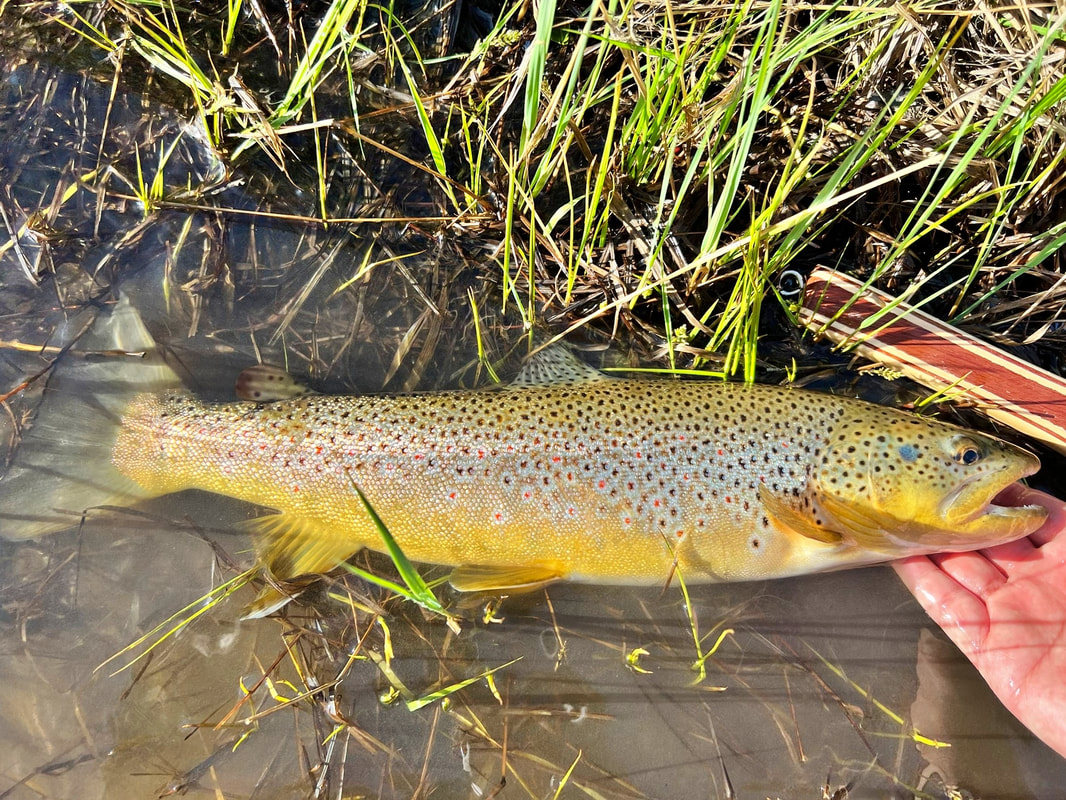 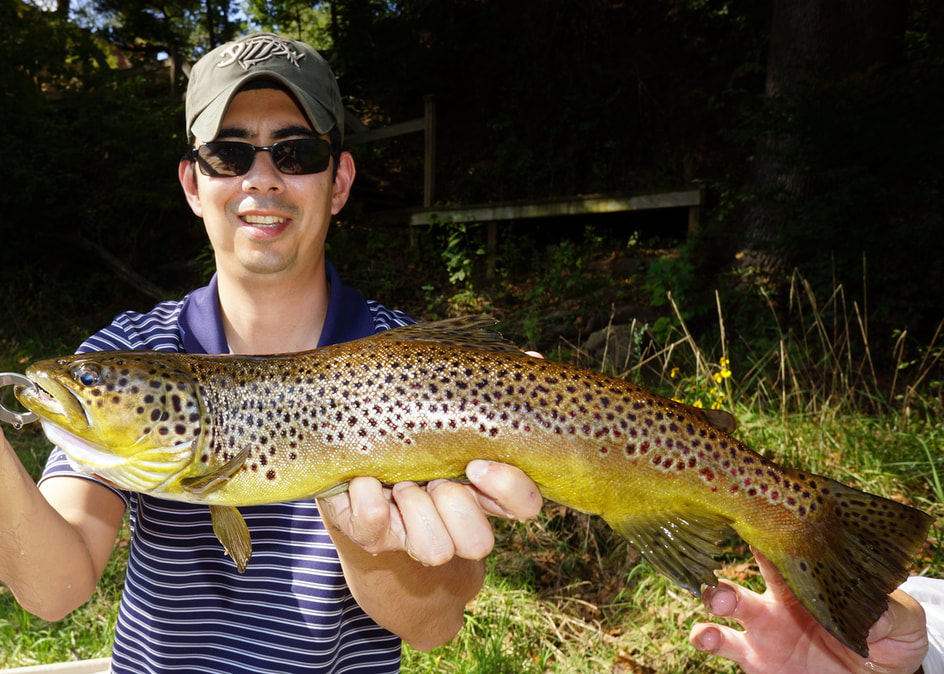 Another White River Brown Trout caught on a jig.
Click below for some other great Brown Trout tackle: 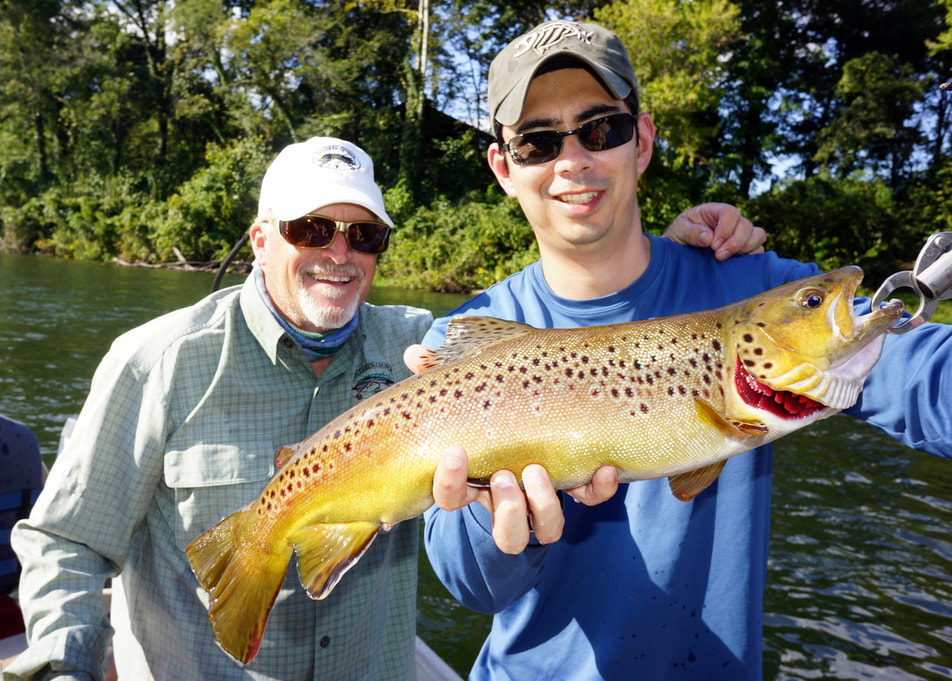