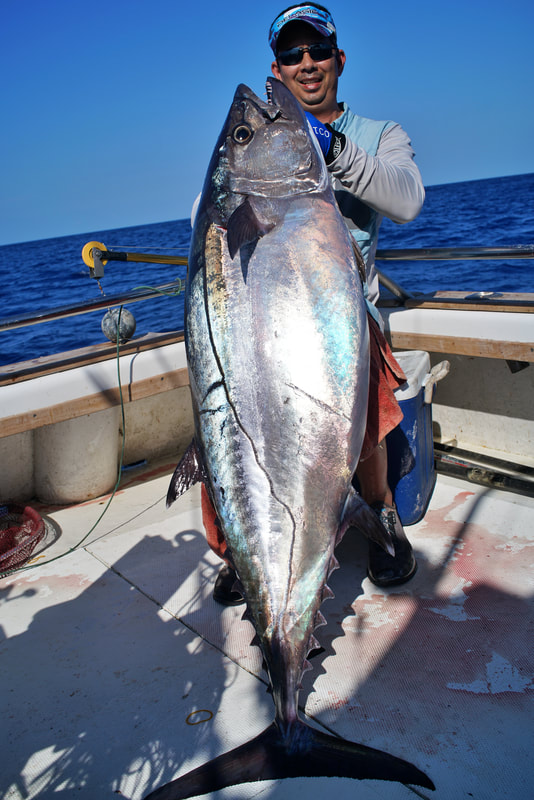 ​After a fantastic trip to the bush, I went on a 12 hour car ride back to Dar Es Salaam, got a few hours sleep, and then headed out into the sea at 3:30am.  Our destination was Latham Island, which lies about 80km out to sea from Dar.  There were two boats going; one with 4 guys from Sweden and the other with just me, the captain, and two crew.  Below is a photo of the boats; the one on the right was the one I was on:
The ride out was uneventful and the seas fairly calm so I was able to catch some sleep.  We got to Latham around midday and started to fish.  Unfortunately, it was extremely slow fishing.   It seemed like the ocean was completely empty.  I got one Bonito casting a lure and that was it.  To add injury to insult, just as I was in the middle of launching a cast from the bow, a wave hit unexpectedly and caused me to completely lose my balance.  The forward momentum of the cast combined with my feet slipping caused me to crash hard into the low metal railing.  I knew immediately that, at a minimum, I was going to be in pain the rest of the trip.  I have never slipped on a boat like that before.  It was like someone smashed my ribcage with a crowbar.  After taking a breather I tried making a cast, and that motion was very painful.  Fortunately, it didn’t hurt to breathe, and there were a lot of motions I could do that didn’t hurt.  I used my satellite messaging device to ask my wife to look into broken ribs, and from what she found it didn’t sound like there was much to be done about it or any immediate danger based on my symptoms.  I was hoping I had just bruised them.  I decided to spend the night and see how I felt in the morning.

I had the option to stay on the boat or camp on the island, and since it was getting rough in the evening I decided to stay on land.  Latham is a small island, perhaps the size of two football fields.  It has no human inhabitants or structures.  Most of it is absolutely covered with thousands of birds.  As far as I could tell there were only two species – Nazca Boobies and some other type of seabird that I didn’t recognize.  The birds never seemed to sleep and made a huge ruckus 24/7, but after sleeping next to loud Hippos for 6 nights, I had no trouble with the birds.  The camp was very primitive, with no restroom or shower options and very small basic tents with no sleeping mats or anything.  Luckily the other boat had caught a Mahi Mahi, or we might have just had plain rice to eat since the eggs got left on the boat.  My tent was considerably less than 6 feet wide, so even if I slept diagonally I still couldn’t stretch out.  The sand was kind of a hard surface to sleep on, especially with my busted ribs, but I must have been tired because I had surprisingly little trouble sleeping.

My ribs hurt a lot when I woke up, but they didn’t seem worse than before, and once I got moving I found that there were several motions I could do without pain.  Casting lures (my preferred style of fishing) was not going to be an option, but I felt like I could successfully troll, bottom fish with bait, and jig, since those all primarily involved using my right side.  I spoke with the captain and we came up with a fishing plan accordingly.  As is often the case in fishing, that day was a complete 180 from the prior day.  The ocean was full of life, birds were diving to eat small fish everywhere, and the pelagic predators moved in.  I was getting fish at a steady pace, and while none were giants, there were some nice fish.  I caught several Wahoo: 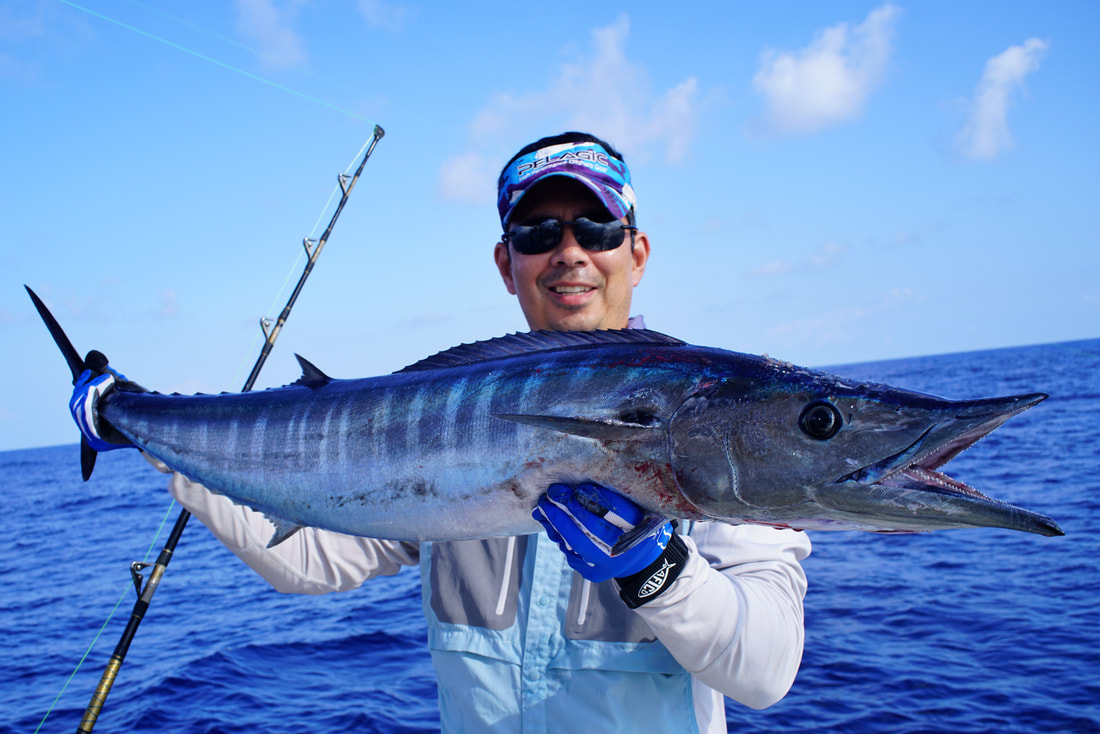 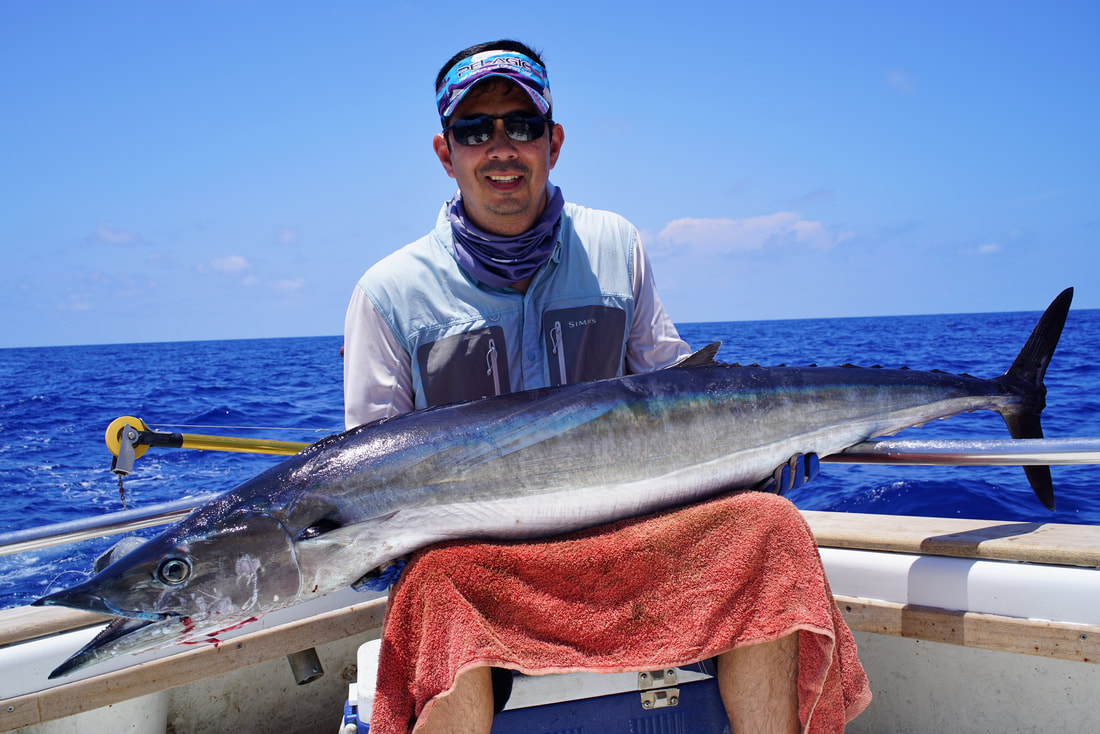 ​Wahoo in Hawaiian is Ono, which means delicious, so we would be eating well that night.  The crew perked up because they would be taking most of the fish to the market and making some money.  Some Mahi Mahi and Yellowfin Tuna filled out the pelagic culinary trifecta.

Around the middle of the day I got a big hit that I was pretty sure was a big Dogtooth.  Characteristically,  it headed straight into the rocks and broke me off.  I was pretty bummed as I thought that might be my only shot, but later in the day we caught a Rainbow Runner, which make good Dogtooth bait, and so I dropped it down to see if there was another Dogtooth around.  After about 40 minutes something grabbed the bait and started heading for the mainland at tremendous speed.  I was barely able to keep a hold of the rod (we had actually tied the reel to the boat with a rope just in case; Dogtooth are very strong) and set the hook.  I was using an enormous big game reel meant for Marlin, and just the reel itself probably weighed about 10lbs.  It was holding a ton of line.  However, line was screaming off the reel at a terrifying rate.  The remaining line on the reel was getting smaller and smaller, but before it ran out the fish finally stopped running and I was able to turn the reel handle a couple times.

In any situation, the more line you have out, the greater a chance you have of losing a fish.  Given how far the fish had gone, I was not feeling optimistic about my chance of landing it.  Fish are very adept at shaking hooks out with the slightest bit of slack in the line, and there are many things that can go wrong when they are that far away and you have to reel in that much line.  I was kind of surprised it had not already broken me off in the rocks given how far it had gone.  The fish started swimming towards the boat, and I had to reel in hundreds of yards of line in very fast to keep the line tight and prevent it from spitting the hook.  My right arm felt like it was on fire and I didn’t know how much longer I could keep up that rate of reeling.  I knew I was very unlikely to get another chance at a fish like this, so I tried to ignore the pain and keep reeling fast for what seemed like forever.  Once almost all the line was back on the spool, the fish decided to run back out and immediately all the line I had worked so hard to get back evaporated in 5 seconds.

Knowing how hard it would be to get all that line back again, the thought crossed my mind to just quit and hand the rod off to the crew.  However, I knew I would always regret it if I did so I willed myself to keep going.  Fortunately, the fish was tiring at that point too, so I was able to steadily wind it in rather than having to speed wind and burn out what little was left in my arms.  When it finally came into view, it was every bit as big as I was hoping it would be.  It took two guys to hoist it on board.  I was definitely not one of those guys because by that point I could barely hold the rod, but I was really stoked. 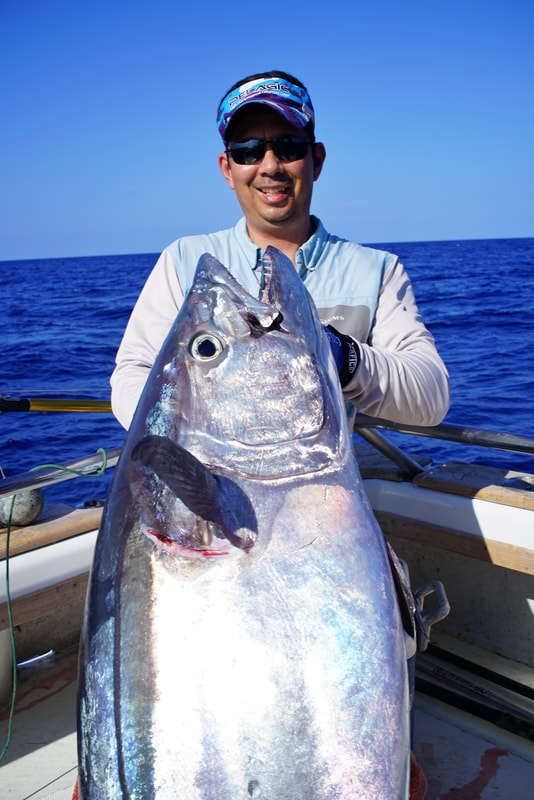 At that point, my trip was completely made.  I didn’t have to catch another fish.  However, the crew really wanted more fish to sell so we got back to fishing after I rehydrated and got another Mahi and then called it a day.

While sitting at camp in the dark that night with the Swedish guys, I was startled by something crawling over my foot.  I assumed it was a crab, and just then something crawled over one of the Swedish guys’ foot as well.  We turned on our phone lights and discovered our camp was being overrun by baby turtles.  We couldn’t tell where they were coming from, but they must have just hatched from a nest nearby and were looking for the sea.  More and more were showing up and we quickly realized that they were attracted to our lights, so we turned them all off except one and used that one to lead them to the sea.  That was a very cool experience that I had always wanted to see but was not at all expecting.
​ 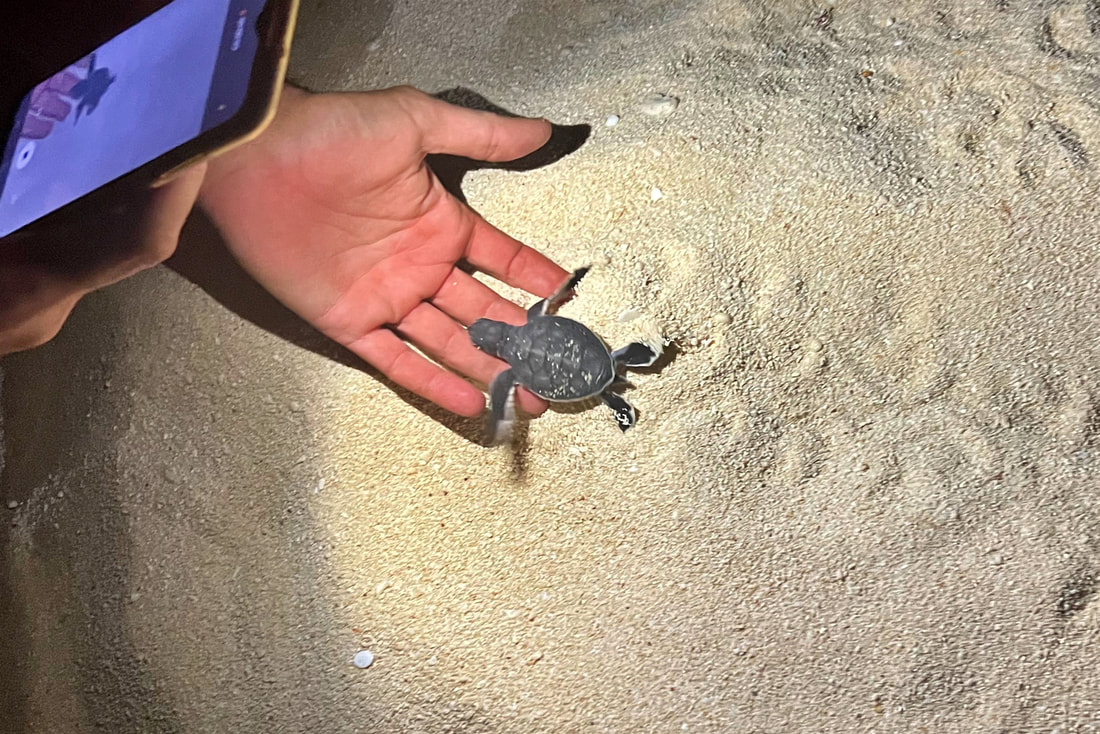 At that point I was ready to go home.  Usually they fish until dark and then head back to Dar, but I asked that we just fish the morning and then start heading back.  There was still some life around, but not nearly as much as the prior day.  I got another Wahoo and Mahi, and then another couple of Wahoo trolling on the way back. 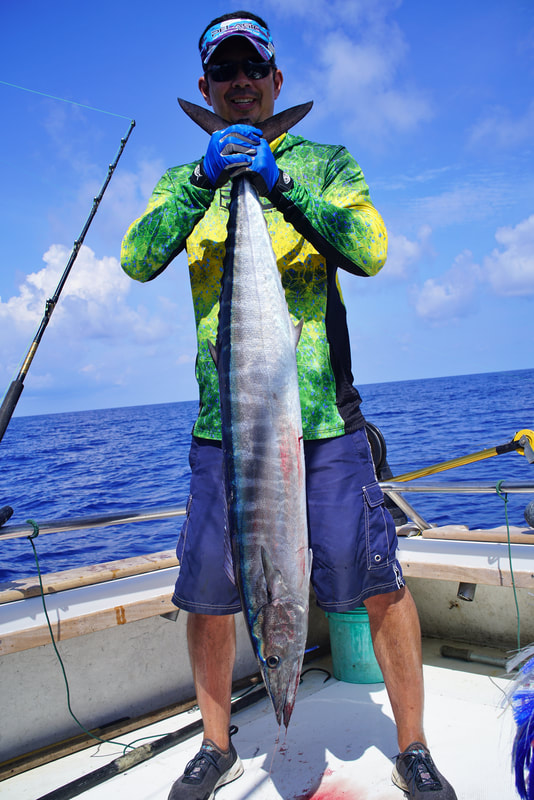 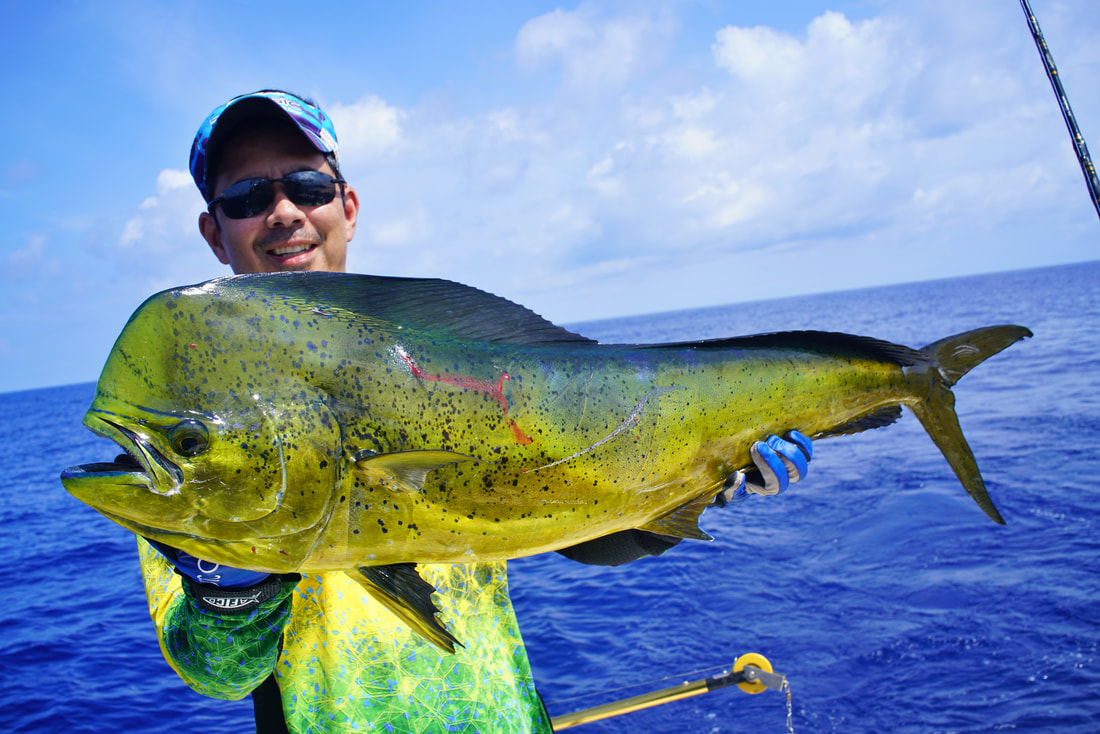