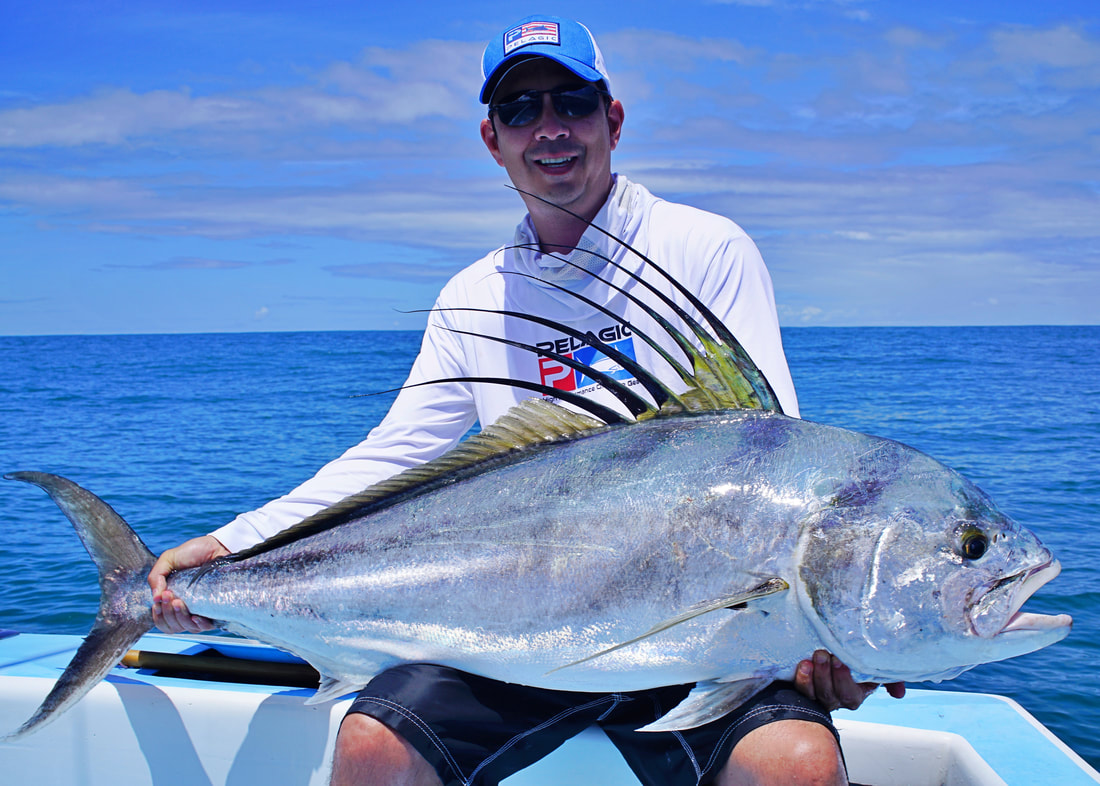 After over a year of not flying anywhere due to COVID, I was finally able to get down to one of my favorite places, Costa Rica.  I booked the trip with Quepos Fish Adventures, who were extremely helpful with all the logistics.  When my brothers and I arrived at the airport, we immediately got a phone call saying our AirBnB had been cancelled.  Not a great start, especially since it was a holiday weekend and most places were booked.  Andy from Quepos Fish Adventures was able to find us a place until we could find something.  My brothers were going to surf, so we stayed down in Dominical and I caught a ride up to Quepos to fish.  The plan was to fish 3 inshore days for Roosterfish and then head offshore to the FADs to hopefully find some Blue Marlin.

Day 1 started with great optimism, but the fish were not biting at all.  I fished all day with some good looking live bait and only had a needlfish to show for it.  I don't hate Needlefish as much as most people, but they were certainly not what I came down for.
​
After the first long and ultimately unsuccessful day, I was still optimistic.  Most multi-day trips involve a bad day or two, so I wasn't worried.  The next day I opted to bottom fish for snappers and groupers.  We had some action, but the quality was quite poor.  We tried a lot of different rocks and got a mixed bag of snappers and groupers, but really nothing to write home about.  After that I asked to try to Roosters again and we fished the last hour and a half or so without a bite.  I took the bottomfish back to eat and they were delicious.
Day 3 was the last day inshore, so if I was going to get a Rooster it would have to be that day.  We made an hour and a half run to where the water was a little clearer and started fishing near some big rocks.  Within a relatively short time I was able to hook one up.  The captain was begging me not to lose it because things were slow and we probably would't get many bites, so I took it slow and got it in the boat. 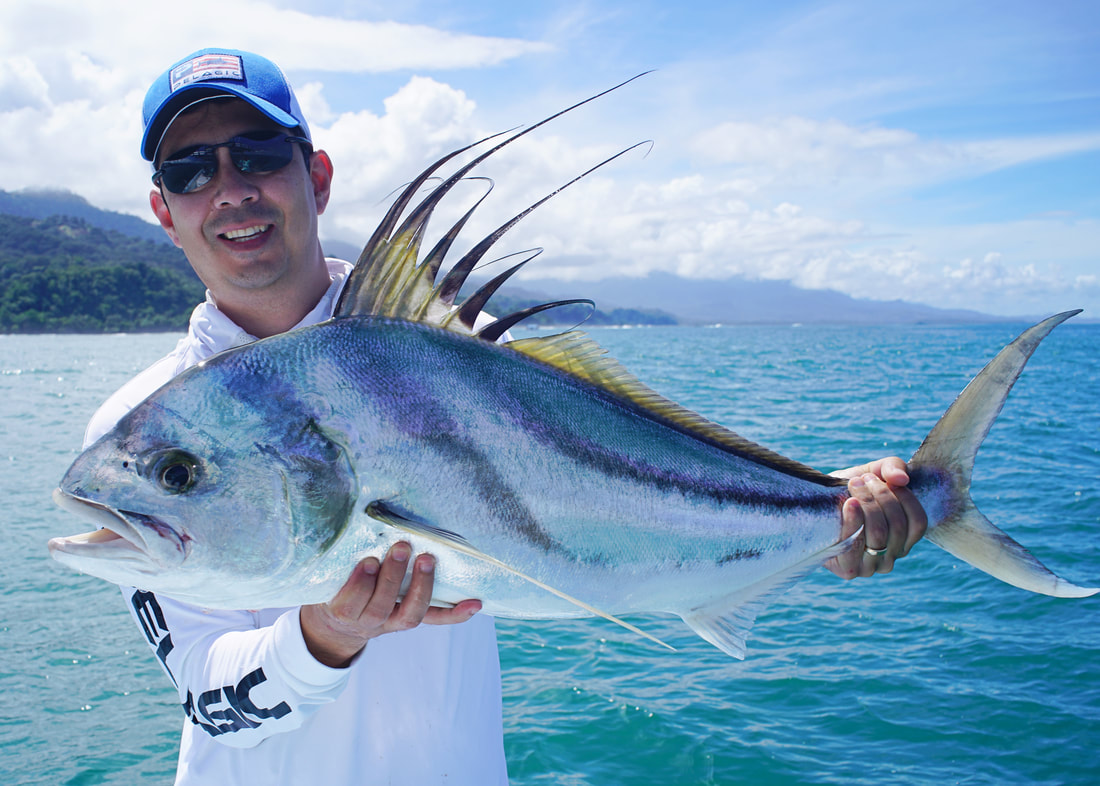 On the board!
The fish went on a short run and then paused, and at that point I lifted the rod and could feel it was a very big fish.  The Roosters are a little picky in Quepos due to fishing pressure, and so they use 40lb leaders even when fishing live bait.  I was trying to put pressure on the fish without snapping the line, but this fish was in no hurry to get in the boat with us.  I got it to leader on 5-6 occasions, only to have it take off on a long run.  What an incredible fight; definitely the toughest of any Rooster I have fought.  Once we got it on board it taped out at 54 inches, and according to an online Roosterfish weight calculator I found would have weighed somewhere between 64-72lbs.  It was the second biggest I had ever caught.  I would much rather have caught that one fish than 25 20lb fish every day.

Things slowed a bit after that, but later in the day I was able to stick one more nice fish and lost one more. 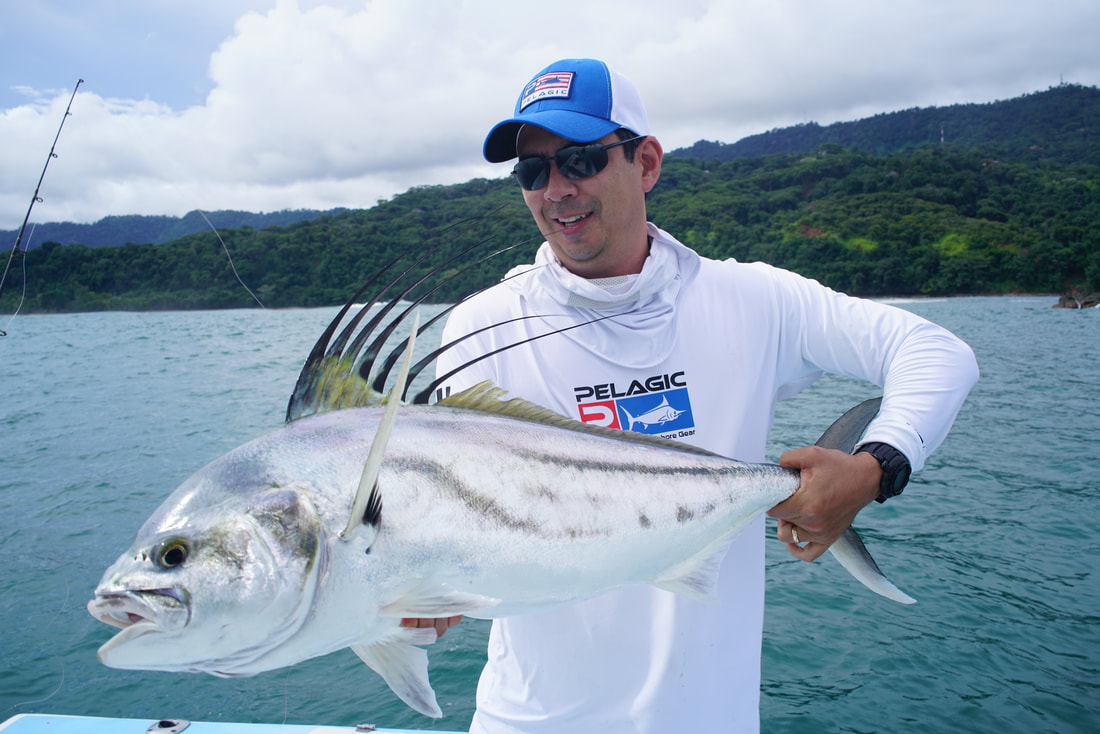 A nice healthy fish with lots of girth.
A nice Pargo (bigger than it looks in the video) and some Jack Crevalle and other fish swimming around in the marina.  Too bad you can't fish there.
An unruly monkey near the house we stayed at.
With the inshore mission accomplished, it was time to head offshore to look for Marlin.  The boat was the 40ft custom Blue Daze.  I boarded around 4pm and settled in for the long ride out.  The ocean was a little rough and I had a hard time sleeping.  I started to feel a little queasy getting bounced around in the dark, but fortunately that feeling passed in a couple hours and I was able to find a spot on the floor near the back where it wasn't so bouncy and got some sleep.  Somewhat ironically my toiletry bag got tossed into the toilet sometime during the night, so I had to throw away most of its contents.  That was the only mishap though.

We reached the first FAD around daybreak and started fishing.  We started by trolling a spread of lures around the FAD.  After a few hours with no bites, we started catching bonitos for bait and slow-trolling those.  Still no action.  We saw one other boat out there with us and they briefly hooked a marlin which we could see jumping, but it jumped off fairly quickly.

After a few hours of nothing, we decided to make a move to another FAD farther out.  We ran quickly part of the way and then trolled once we got closer.  Around 3pm one of the reels started screaming and a big billed head broke the surface and started heading for the horizon.  That's what I was there for!  The fish dumped quite a bit of line off the reel before I was able to get a crank in.  I could see it jumping way off in the distance and worried it would throw the J hook with that much line out, but fortunately everything held and I was able to get it close to the boat.  It put on quite an ariel show the whole way.  Quite a memorable fight.  Every time I land a marlin, it feels like quite a accomplishment because a lot of things have to go right. 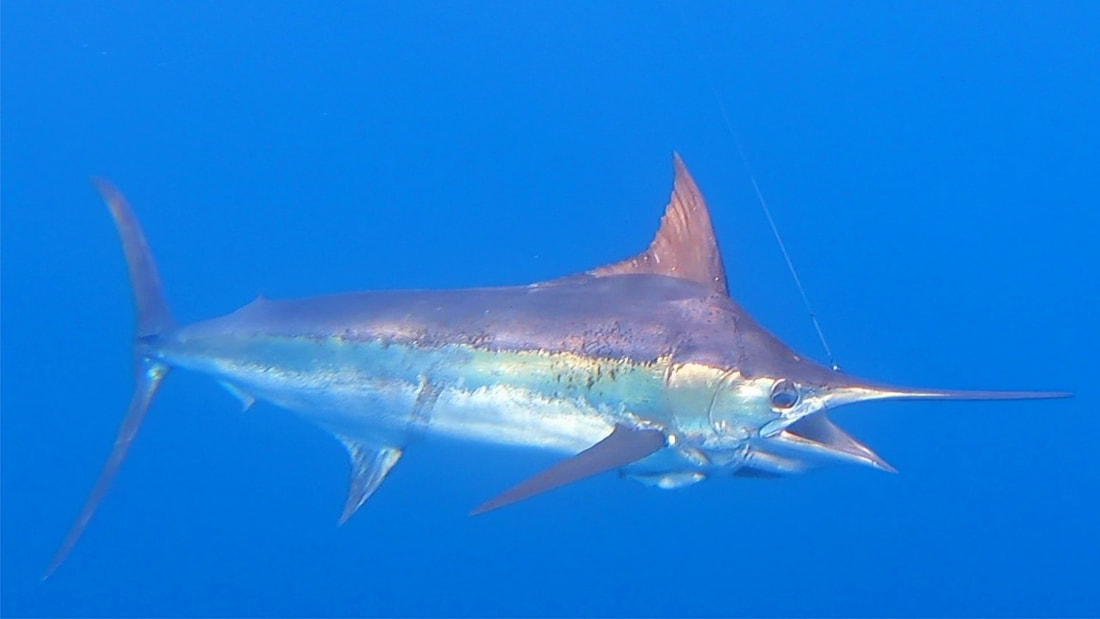 Blue Marlin close to the boat
After releasing that fish, we fished some more in that area but didn't see anything so we headed for a more distant FAD overnight.  The ocean had calmed considerably, and it was a relaxing trip.  In the morning, we awoke to see one other boat in the area.  We started fishing again, alternating between lures and live baits.  Sometime mid-morning one of the reels started screaming and a marlin started going crazy on the surface.  It took off and dumped about half the spool on the Tiagra 80W reel.  It unfortunately then made an abrupt turn and headed towards the boat.  I reeled as fast as I could, but could not pick up line fast enough and it was able to spit the hook.  What a bummer; I knew we would't get that many chances so it was tough to miss that one.

We changed out the hook on that lure and kept fishing.  A couple hours later that same reel started screaming.  We set the hook hard several times, but this one also managed to spit the hook.  We did not have any more hits the rest of the day.

The crew of the boat was fantastic and everything was well organized.  Any trip where I land a marlin I consider a success, but I was expecting a bit more action given the reputation of the FADs.  Oh well, maybe next time.  Quepos Fish Adventures was great with all the logistics of shuttling me around and making last minute arrangements when my AirBnB got cancelled.  They made everything super easy. 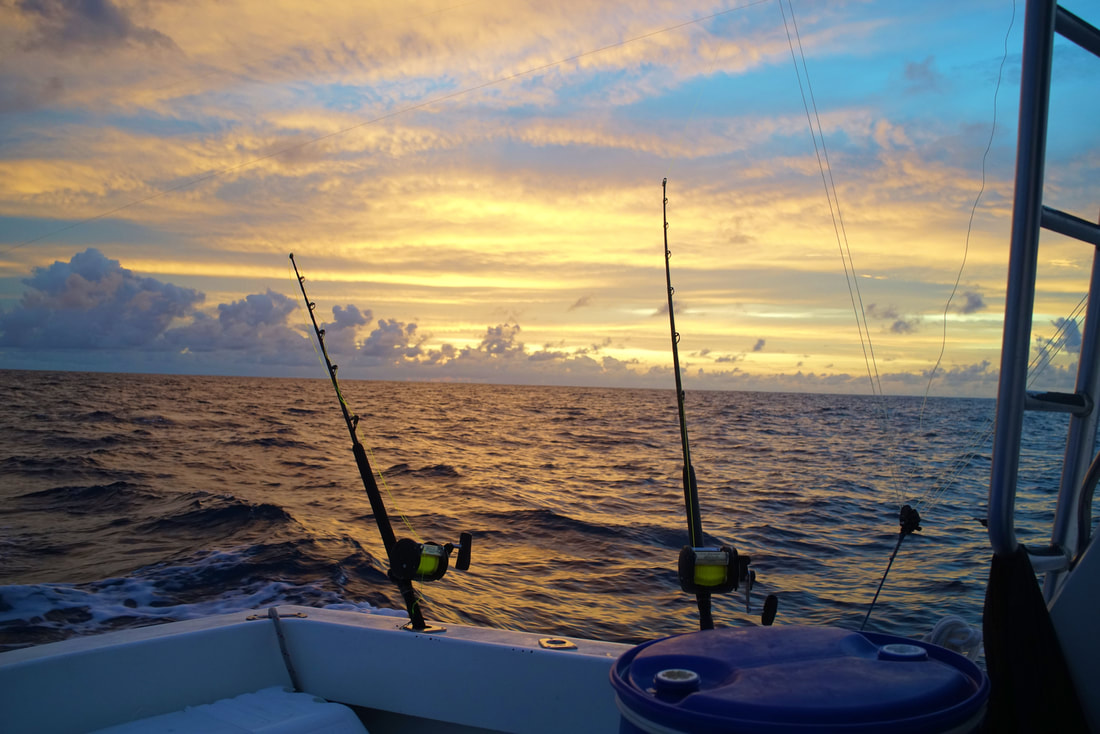 Sunset on the farthest FAD
While I was out fishing, my brothers were out hitting the surf: