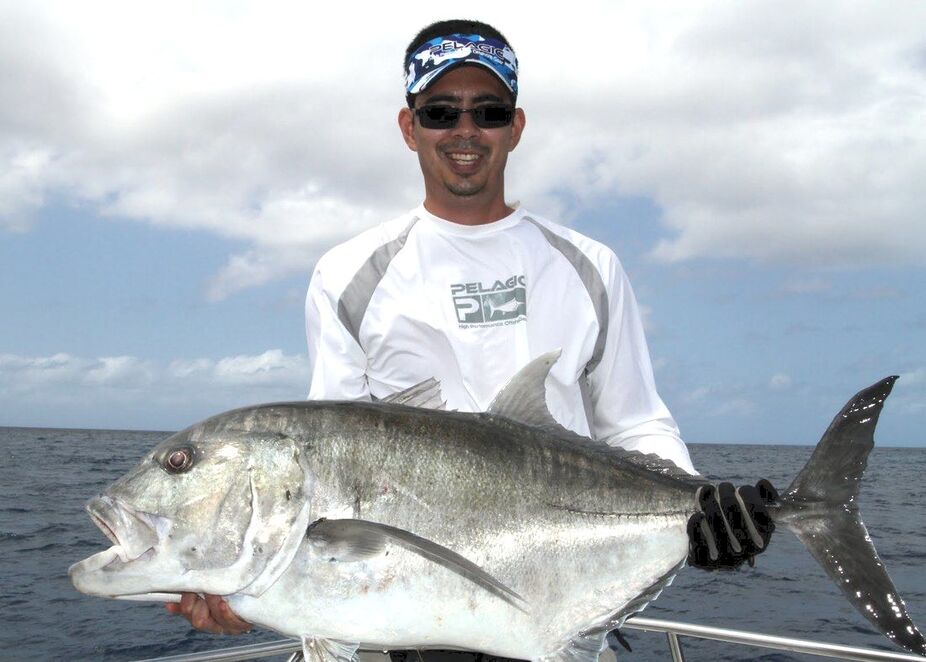 Giant Trevally (called “Ulua” in Hawaiian; “GT” in Australia) have been an obsession of mine since childhood.  Growing up in Hawaii they were the ultimate nearshore gamefish.  They are the largest member of the Jack family and are the kings of the reefs where they live.  You see them on bumper stickers a lot down there for whatever reason.  However, despite several close encounters, I was not able to finally land one until age 34.

Giant Trevally live in tropical reefs throughout the Pacific.  They are pure muscle and a very, very tough adversary even on heavy tackle.  They typically charge out of the reef, grab your lure, and then charge back in and cut your line on the rocks.

I had one trip to the Marshall Islands where every single Giant Trevally I hooked broke me off in the rocks.  I was only using 50lb braided line and that was not enough to land a single one, even ones that I could see were only in the 10lb range.  The water was too shallow and the reef was too sharp.  That was very humbling.

Giant Trevally top out around 200lbs but fish that size are nearly impossible to land on sportfishing tackle because there is almost no way to keep them out of the reef.  The hook will bend, the line or rod will snap, or something will give before a fish that size will.  Anything over 100lbs is a real trophy.

Want to get a sense for what it's like to fish for these guys?  Check out this short video clip from my Aitutaki trip:  http://www.youtube.com/watch?v=Nq64NxuGQk4

Giant Trevally Pound for Pound Fight Rating - 9.5 out of 10 on the Saltwater Scale

Giant Trevally pull like gorillas and are very adept at heading straight to the reef and breaking your heart and your line.  These are one of the toughest fish to land on rod and reel.  You need to use the best and heaviest tackle and you still will not land them all.

They can be eaten if you are starving, but they are not a great food fish.  They are also carriers of ciguatera toxin in many areas.  Release these great fighters to fight another day.

If you are fishing for these using poppers or stickbaits, you need a very stout spinning or conventional setup capable of making long casts with these heavy lures.  I would not go with less than 100lb braided line and a 200lb monofilament leader (poppers) or 100lb fluorocarbon leader (stickbaits) if you are fishing for the big ones.  The only reel I would fish with is a Daiwa Saltiga.  There is a great review of the Expedition model by Alan Hawke here:  http://www.alanhawk.com/reviews/exp14.html I would pair it with a high end rod from Japan made specifically for this type of fishing such as a Smith Komodo Dragon (poppers) or a Carpenter Coral Viper (stickbaits).  The rods are very hard to find; very few tackle stores will have them.  Probably virtually none in the United States.

If you are fishing with bait from shore as is common in Hawaii most people use a conventional reel with a long rod for casting past the rocks.  You need a reel that can hold a lot of line since you can’t chase the fish.  I personally have not caught any this way.

Whatever tackle you use, make sure everything is in top condition.  If there is any weakness in anything – hooks, split rings, lure, line, knots, rods, etc – you might as well not even bother hooking them in the first place because the fight will be over immediately.
No matter what tackle you use, sometimes this will happen:
To minimize bustoffs, use top quality reels like these: 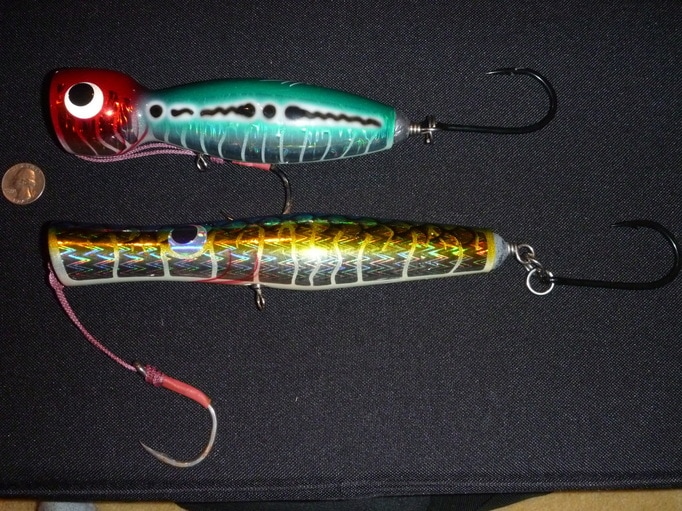 The Heru Cubera and Heru Skipjack, both excellent Giant Trevally lures. That red head/green body color has been excellent for me in various locations. 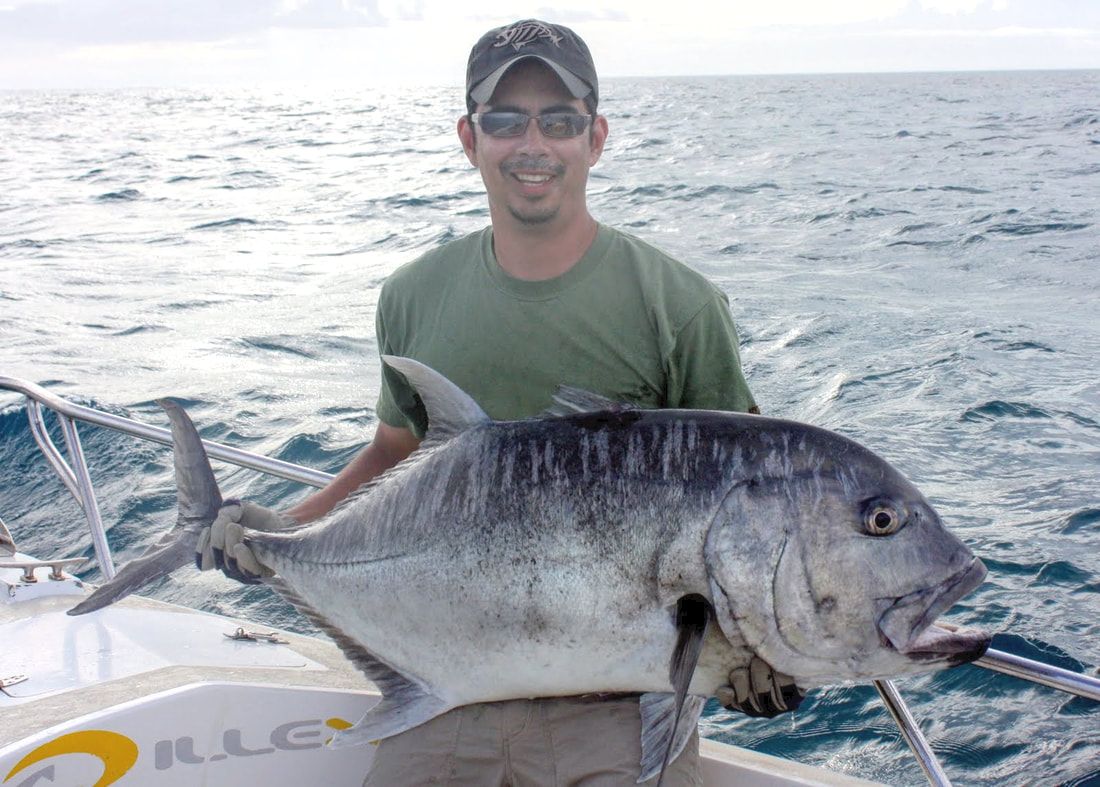 Giant Trevally readily eat baits but are much, much more fun to catch on topwater lures.

Giant Trevally love large poppers such as those made by Heru, Halco, and many other manufacturers.  You cast them as far as you can, and then retrieve them with long sweeps of the rod so that the poppers kick up a lot of water.  You should vary your retrieve speed to figure out what they like.  Give it a pause to give the fish a chance to strike; you don't want to pull it away from them.  The strike is often dramatic as they launch out of the water in a shower of spray trying to annihilate your popper.  As with all topwater lure fishing, you have to wait until you feel weight on the end of your line before setting the hook as the fish often miss the lure on the first try.

Giant Trevally also love stickbaits such as those made by Heru and Orion.  You can use either surface or subsurface stickbaits; my preference is subsurface.  You generally retrieve this with a long sweep of the rod and then a pause.  The strike usually comes on the pause.  With the subsurface stickbaits you can’t see the strike coming, so all of a sudden you just feel a violent yank as the fish tries to pull your arm out of its socket.  When fishing over a reef you have to be careful that your expensive stickbait doesn't sink into the rocks.  There are a couple of surface stickbaits, such as the Adhek Goby, that I also like.  These can be retrieved in a variety of ways, but my favorite is a straight fast retrieve so that it skips on the surface.  Oddly enough the GT strikes are pretty accurate on this lure, perhaps because of the constant speed and direction.

No matter how you fish for them, make sure you get a solid hookset.  They often grab the lures in their mouths and hold them so tightly that the hooks don’t penetrate and then they just spit the lure out.  That's one disadvantage to wooden lures (although I use them extensively); the GT teeth often sink in and make it harder to set the hook.  With a hard plastic lure like a Sebile Splasher the lure slides more easily through their mouth and embeds the hook.  Regardless of what lure you are using, set the hook hard multiple times.  To increase your chances, replace all treble hooks with heavy single hooks as shown.  The single hook is harder to shake.  They often grab the lure head first.

When I go GT fishing my tackle box has some Heru Cuberas in the 125 and 150 sizes, a couple of Adhek Long Gobys, one or two Heru Skipjacks in the 150 size, a couple of Sebile Splashers in the 190 size, and some Heru Bobara sinking stickbaits in the 100 and 150 sizes.  These are relatively inexpensive lures (at least compared so some of the crazy expensive Japanese models), have worked well for me in various places, and are relatively easy for me to work (except for the Skipjack which is a chore).

Those lures are hard to find in the US.  Click below for some relatively inexpensive poppers that still work to catch GTs.  You don't have to spend $100 per lure for those high end Japanese poppers.  I have seen some big fish caught on the Halcos in particular.  You will want to change out the hooks and split rings for stronger ones though.  The Owner Jobu hooks shown below are good to use for the back.  Owner Hyperwire split rings shown below will get the job done.  Click below to purchase: 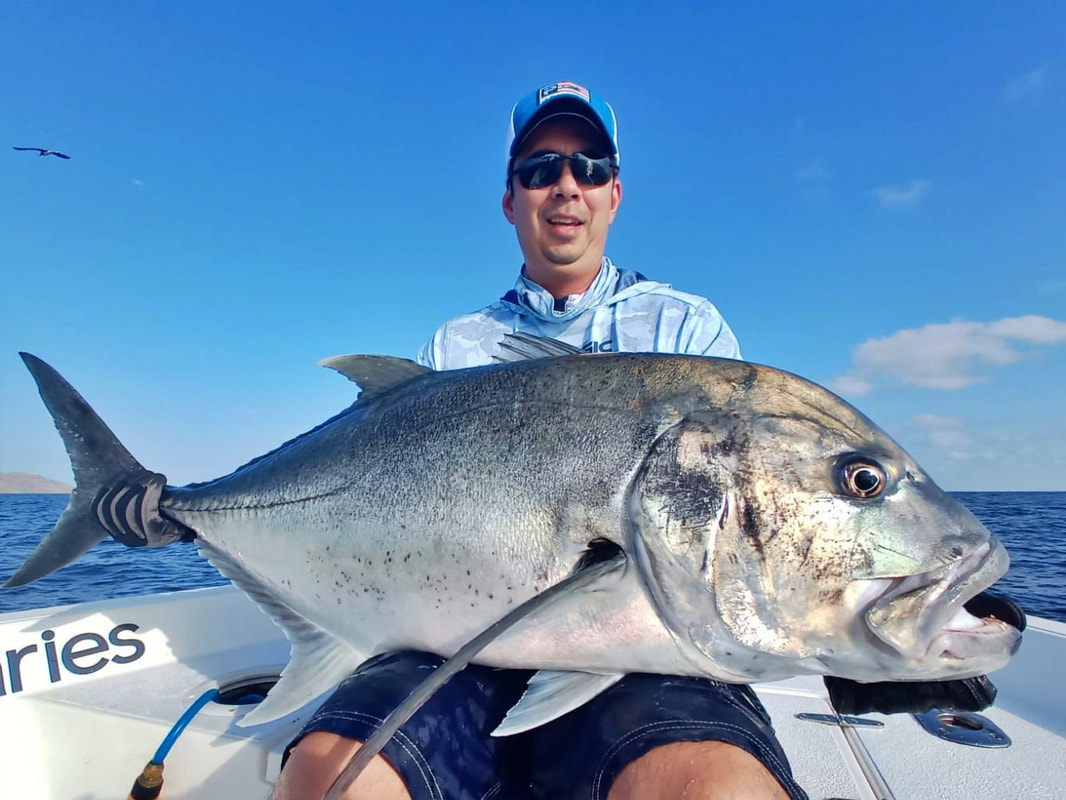 I never fish for them with bait but I know in Hawaii octopus and eels are popular baits to use from shore.  I'm sure various live and dead baitfish like mullet and flying fish work.

Where to get the big Giant Trevally

The Great Barrier Reef and New Caledonia have some big ones that can be caught on poppers and stickbaits.  Indonesia has some good GT fishing, as does Fiji and many of the remote Pacific atolls.  I have also heard about some good GT fishing in Oman of all places.

The above barely scratches the surface on how to catch Giant Trevally.  The resources below will provide a wealth of information:

www.oceanbluefishing.com  is the outfitter I used for my trip to New Caledonia.  They now focus on GT fishing in Vanuatu.

www.nomadsportfishing.com.au is an excellent operation in Australia.  The first GT on this page was from a trip with them. 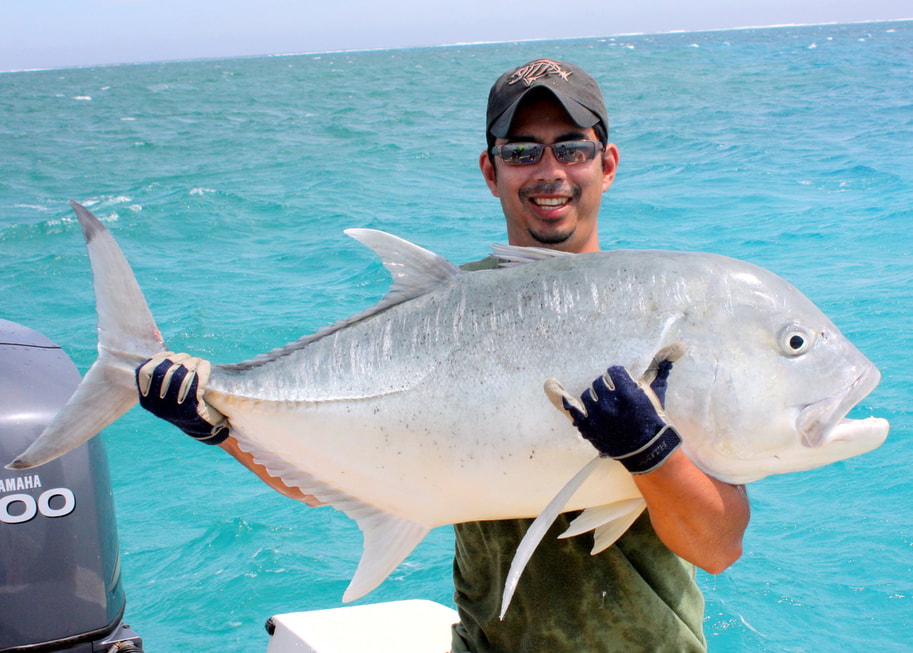 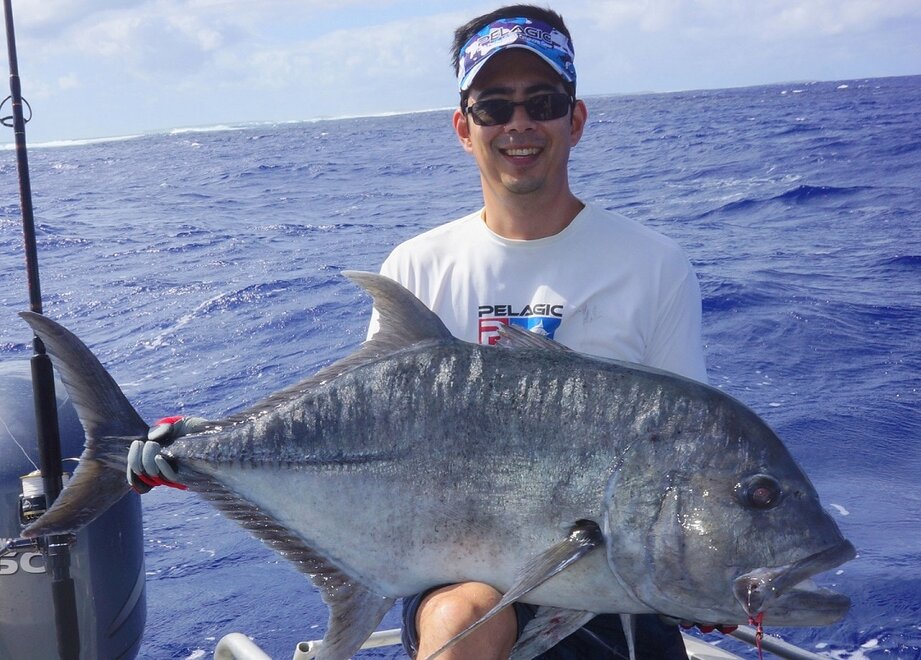 Giant Trevally caught in Aitutaki on a Heru Cubera popper. 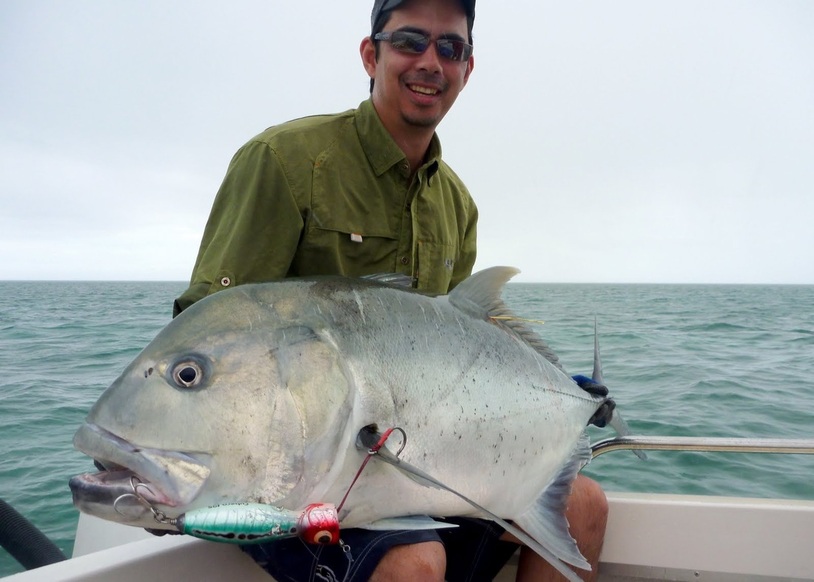 The author with a Giant Trevally caught in Nekweta, New Caledonia 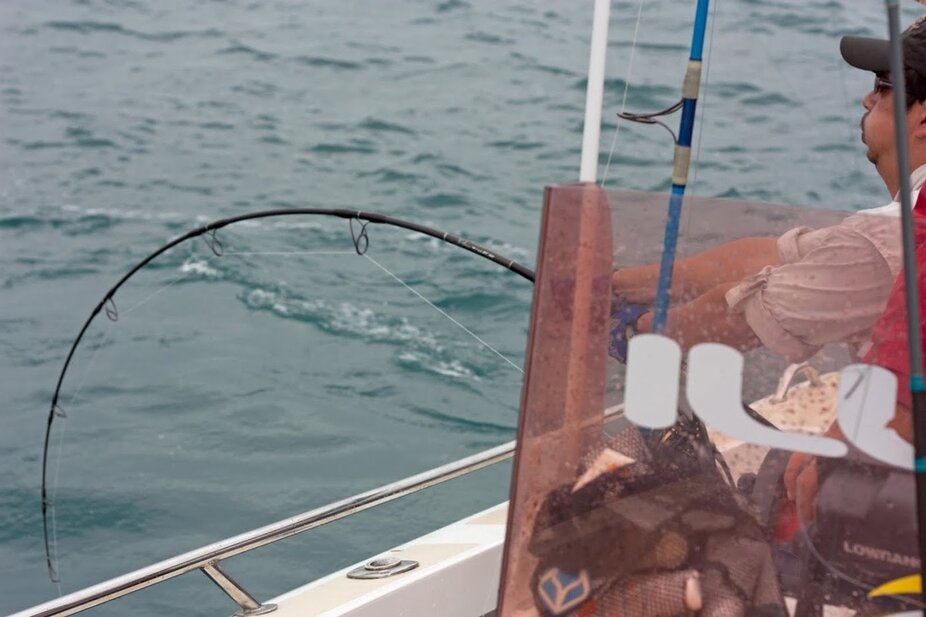 GTs push your tackle to the limit. Don't bring a knife to a gunfight. Heavy braid, a strong drag, and a very strong rod are the way to go.

Click on any pic in the gallery below to enlarge: 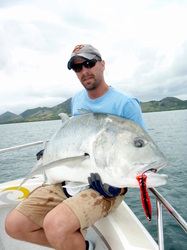 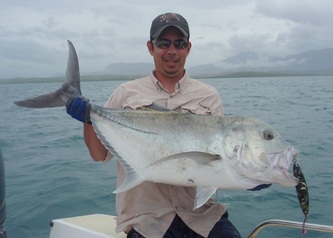 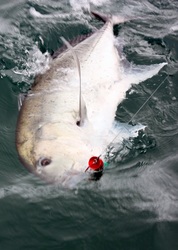 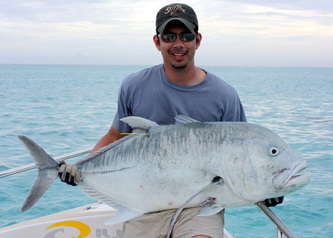 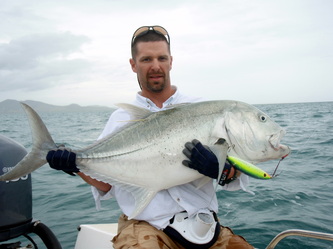 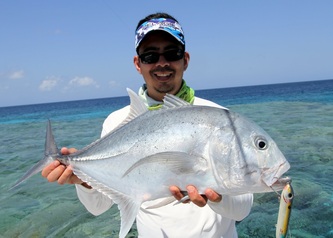 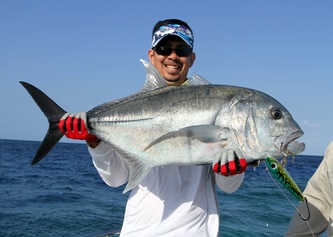 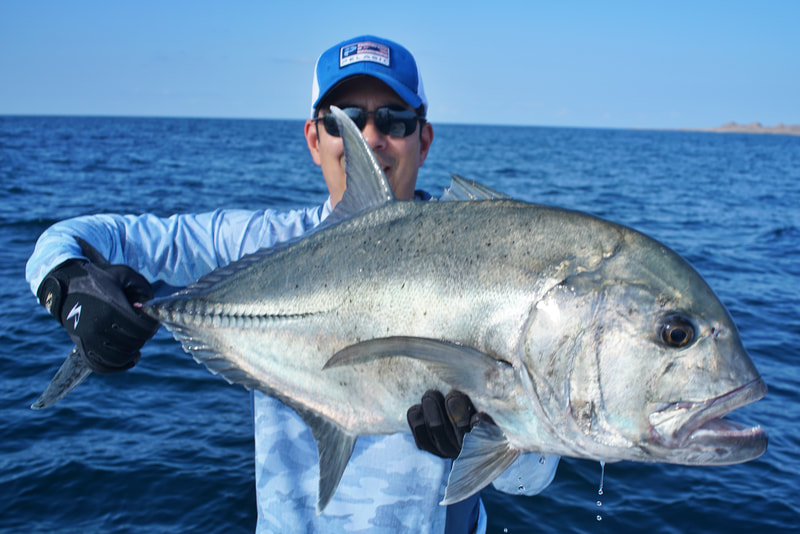 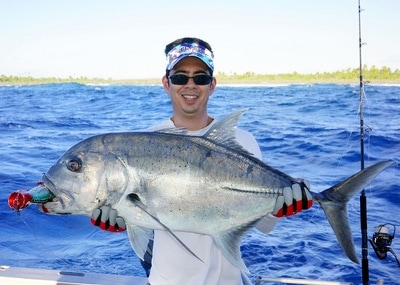 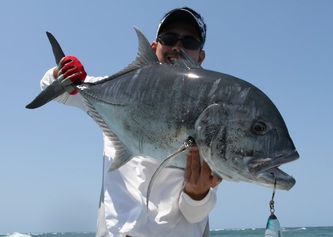 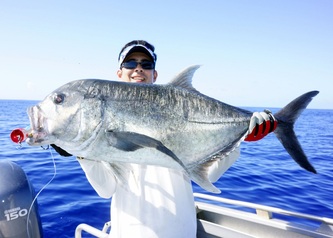 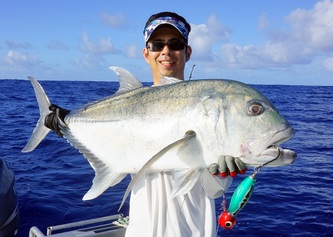 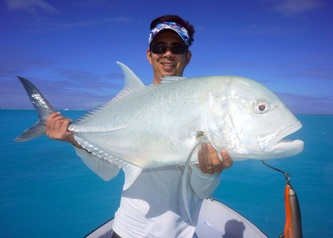 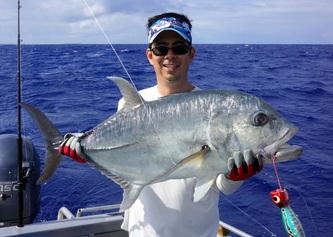 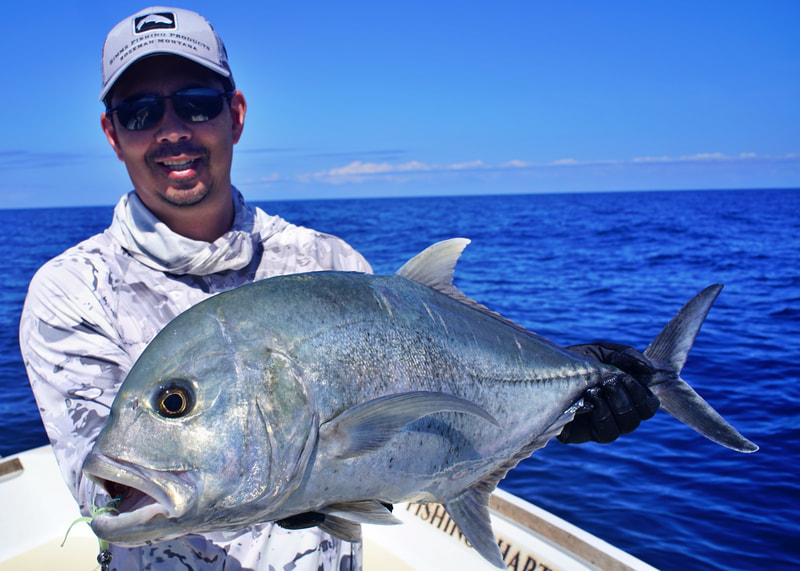